Call it the great schism.

And perhaps highlighting the complexity and lobbying efforts on both sides, three faith leaders signed both letters—saying they both support and oppose the plan.

Mr. de Blasio’s affordable housing plan, which was before the City Planning Commission this morning for a public hearing, calls for two different zoning changes. The first, Mandatory Inclusionary Zoning, will force developers to include affordable units if they want a permit to build new housing. The second, Zoning for Quality and Affordability, will allow for taller buildings. Both have met with disapproval from community boards and borough presidents, though Manhattan Borough President Gale Brewer gave a thumbs up to MIZ, with changes.

In their letter opposing the plan, the clergy today said the units would not be affordable enough for people in the neighborhoods they represent. The plan allows three options, based on the federal government’s definition of Average Median Income, but the clergy argued that all three of them are not low-income enough to serve the majority of residents in neighborhoods like East New York, West Flushing, East Harlem and parts of the Bronx, where the majority of households earn less than 50 percent of the AMI—below the thresholds being considered.

They also wrote that the market rate housing that will come with the affordable units could hasten the “wave of gentrification” across the city, bringing wealthier people and more amenities that will make neighborhoods more expensive and push out long-term residents, and said the plan should call for union construction.

Those are familiar concerns to anyone who has followed debate over these plans at the community board level. But it’s a decidedly different take than the view expressed in a letter from clergy supporting the plan yesterday, which proclaimed both MIH and ZQA to be the right moves for creating more affordable housing for their congregants.

“The two zoning changes will mean thousands more apartments affordable to our congregants,” those members of the clergy wrote in support of the plan yesterday.

Despite the very different messages, three people signed both letters: the Rev. Terry Troia of Project Hospitality on Staten Island, Rev. Yolanda Brown, and Imam Souleimane Konate, of Masjid Aqsa and General Secretary of the Council of African Imams in American. Attempts to reach Imam Konate were unsuccessful.

Reached by phone, Rev. Troia said the discrepancy was her fault. Rev. Troia, who said she is on the mayor’s clergy council and specifically its housing committee, said they asked if she’d sign a letter to “support affordable housing.” She said she hadn’t read both and didn’t realize the two letters were opposing each other.

Asked which letter she agreed with, or more generally how she felt about the affordable housing plan, Rev. Troia said she’d review the letters and then call back. She did not call back or return messages.

In a statement provided by a spokesperson for Real Affordability for All, which worked with the clergy who wrote the opposition letter, Rev. Brown, who also signed both, said she supported the measures but with changes.

“I support the idea of mandatory inclusionary housing but the average median income levels currently used are too high for most residents of the neighborhoods to be rezoned. We need to make sure that our children raised in the neighborhood can stay. And we need jobs with local hiring,” she said.

The letter from clergy in opposition to the plan comes as Mr. de Blasio has been seeking to emphasize support for it—last week from labor unions and the AARP, yesterday from clergy, and this morning from more of the city’s large labor unions. Despite that support, the clergy writing today are not alone in their opposition to the plan—in addition to community boards and the borough presidents, grassroots groups and residents in neighborhoods targeted for re-zoning, and have spoken out about worries ranging from parking to the levels of affordability.

“We’re appreciative of the support our affordable housing proposals have from clergy, seniors, labor and community leaders,” Wiley Norvell, a spokesman for Mr. de Blasio, said. “Everyone brings their own perspective and experience to these issues, even within the context of overall support. That’s part of any coalition, on this issue or any other.”

The dueling clergy letters each have more than 60 signatures. 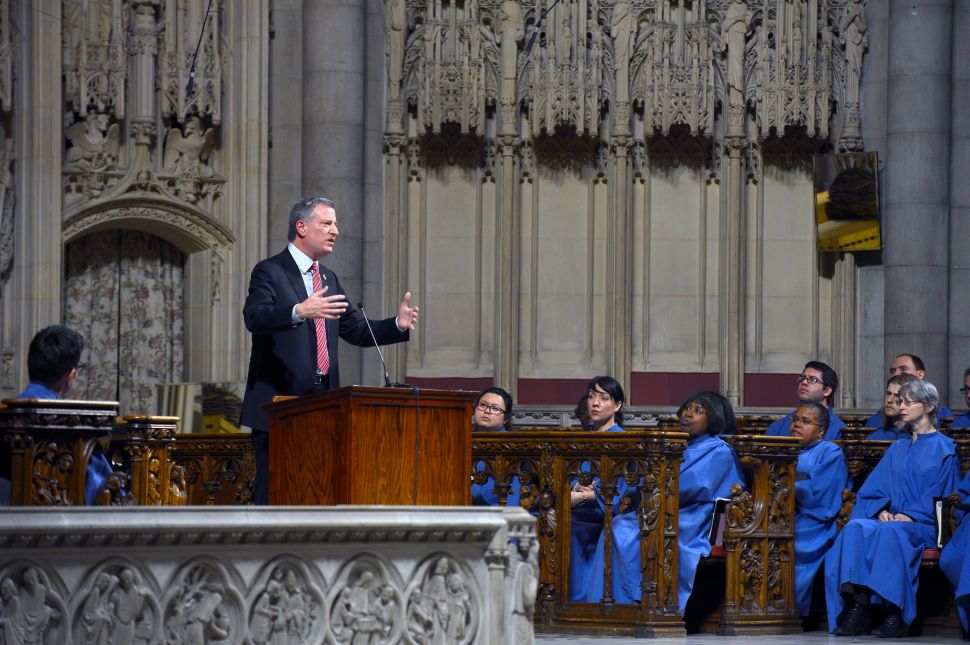