Ron Howard is such a skillful director that his enthusiasm for a ho-hum action project like In the Heart of the Sea can elevate otherwise familiar subject matter above the usual torpor with a visual splendor that may very well expand audience interest. Reunited with poster boy Chris Hemsworth, the latest flavor of fan-magazine beefcake fodder and blank-faced star of the director’s 2013 flop Rush, Mr. Howard has pieced together a briny seafaring epic about the sinking of a whaling vessel called the Essex in 1820 by an angry whale that inspired Herman Melville’s saltwater classic Moby Dick. Bring your own lifeboat.

Already tackled (disastrously) on the Broadway stage by Orson Welles, in two movies—most notably the 1930 original with John Barrymore and John Huston’s famous 1956 remake with Gregory Peck as a stoic Captain Ahab and a memorable screenplay by Ray Bradbury—as well as a 1998 TV mini-series with Patrick Stewart, there isn’t much point in shooting yet another version of the Melville yarn. So Mr. Howard concentrates instead on the 19th century political chaos and social snobbery that pitted the egos of two disparate men—the well-born but inexperienced Captain George Pollard (Benjamin Walker) and the ambitious, working-class first mate Owen Chase (Mr. Hemsworth) who was better qualified for the job but lacked the credentials, financial backing and family influence—against each other and against a demonic ocean creature more powerful than both of them put together. Nothing much happens until the whale shows up, and when it does, it steals the movie.

The true story is related in flashback when Melville (Ben Whishaw) interviews the sole survivor of the Essex (Brendan Gleeson) in 1850 as research for his unpublished novel, which turned out to be Moby Dick. As the narrative begins to take shape in the author’s mind, the film reveals what really happened when the rivalry of two men was interrupted by the lethal attack of a nasty beast the size of Nantucket that seems hell-bent on revenge for the years of carnage visited upon good whales everywhere by the whale-oil industry.

The action sequences are well photographed, the waves engulf the viewer like there’s no tomorrow, and you do feel like you are part of the ship’s damnation as the Essex burns like firewood, sending the crew to their graves in the darkness of the ocean floor, and leaving only four survivors stranded at sea for 90 days. They were miraculously rescued off the coast of Chile and then the return voyage took another three months. It’s a harrowing tale that still packs an entertaining wallop. But any attempt at character development seems to have ended on an editing-room table.

I didn’t see it in 3-D, but In the Heart of the Sea is a movie that would probably benefit from all those technical effects designed to show off the swash and buckle that take the place of human emotions. Despite all the brio and brawn, the screenplay by Charles Leavitt (Blood Diamond), based on the non-fiction best seller by Nathaniel Philbrick, makes little impact. There are aspects afloat reminiscent of the great 1946 sea epic Two Years Before the Mast, but  Chris Hemsworth is no Alan Ladd. He is to the majesty of a ship at sea what a clamshell is to the bottom of a canoe. 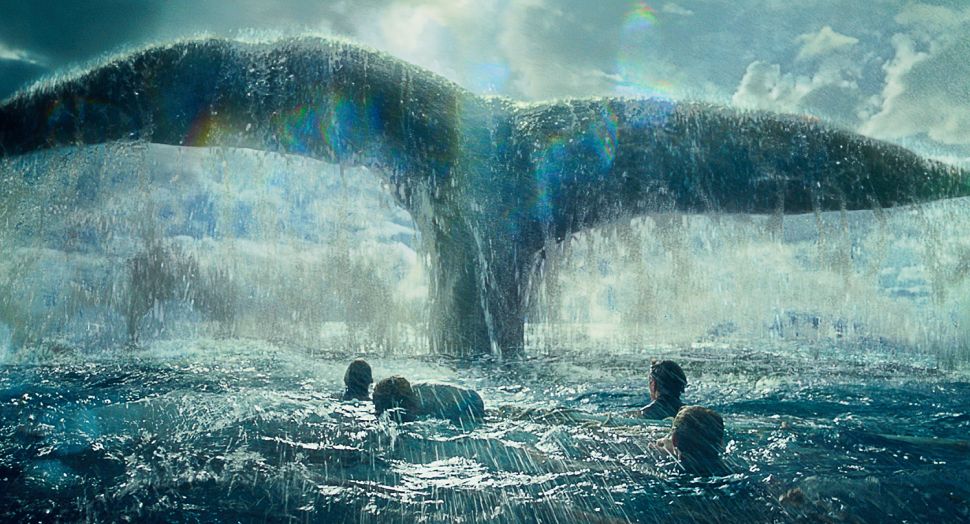