An unusual relationship has developed between an elite Siberian tiger and an ordinary yet charming goat, who found friendship at—almost—first sight.

With fewer than 540 Siberian tigers remaining in the Russian Far East, the Primorsky Safari Park near the city of Vladivostok has been breeding the species in captivity for years. One of them, 3-year-old Amur, until recently never showed need for companionship, or the tolerance for sharing his kingdom. Amur’s menu consisted of the usual: salmon, beef and—twice a week, to satisfy his predatory instincts—live prey such as rabbits and goats.

With just one stroke of his powerful paw, Amur killed other goats with ease—so the last time he carefully approached his dinner he did not expect much out of the ordinary. But this goat was brave, defending himself with sharp horns and charging his own vigorous counter attacks against the “king of the jungle.”

‘The friendship between the tiger and goat will last only until the tiger gets hungry.’

The goat, who should have been tiger food, instead became a friend, teacher and companion to Amur. For this he was named Timur, after the great warrior of ancient times.

“The tiger was confused and gave up,” explained Dmitry Mezentsev, head of the park. “It happened once before, another goat pushed back and the tiger decided not to eat him, but once he showed weakness—that was it—his predator killed him. The situation now is different and the animals are great friends.”

Vladimir Krever of WWF-Russia has a different opinion. “The friendship between the tiger and a goat will be short-lived,” he said, just one week after the encounter took place. “It will last only until the tiger gets hungry.”

Visitors of the park agree. Worried, some are petitioning to separate the two. Comments like “Free the goat!” echo across the park’s website. “My mother is 78 and worries a lot,” wrote another concerned animal lover. “She asked me to write that the goat deserves life!”

But more than a month later, skeptics have been proven wrong—Timur, having conquered the tiger’s heart, still lives with Amur.

‘The goat becomes nervous when he loses sight of the tiger, and immediately starts looking for him. The tiger tolerates him calmly.’

Since the friendship began, Timur hasn’t left Amur’s side. One evening, when Amur was sent to a separate cage, Timur refused to go into his own “bedroom” for the night and slept by Amur, waiting until morning for his friend.

“Timur didn’t leave his place by the tiger’s den, even to eat. Only in the morning, when the tiger came out, did he feed himself,” recalled Mr. Mezentsev. “Such a paradox—he feels safe by the tiger’s side and feels stressful when he sees people.”

Later that week, not wanting to repeat his first lonely night, Timur took over Amur’s den, pushing the predator out to the cold, for four nights in a row.

After that, the park’s administration separated the two—worrying more about the tiger than the goat—giving them separate places to sleep. But still, because Timur hates the cold, every time it snows or rains he pushes Amur out from his “bedroom” to occupy the cozy space.

“The tiger tolerates him calmly,” said Mr. Mezentsev. “The goat becomes nervous when he loses sight of the tiger, and immediately starts looking for him. Before, when leaving his shelter each morning, the tiger used to go about his business. But now he waits for his friend to follow him.”

They also play hide-and-seek in the bushes and behind trees.

Does the goat believe he’s a tiger?

Amur teaches Timur how to hunt. “Sometimes during his walks the tiger behaves like he’s hunting,” said Mr. Mezentsev. “Timur copies the demeanor of the predator.”

Does the tiger believe he’s a goat?

They love to head-butt—strongly but carefully pressing their foreheads against one another for five seconds at a time.

The park doesn’t plan to separate them anytime soon.

“The other goats are cowardly and their destiny is to be eaten, but Timur has earned the right to live with a tiger, and he will stay there because of that. We are not afraid for the goat’s life—if Amur wanted to eat him, he would have done it long ago.”

Mr. Mezentsev points out that in this strange cohabitation, the tiger “has a different attitude toward Timur—as to one who’s equal to him. They even drink together.”

As before, twice a week Amur gets “live food”—but now only rabbits. It was decided Amur wouldn’t get any live goats as a precaution. He loves beef but declines American chicken legs and Australian beef liver, which, according to Mr. Mezentsev, proves that “this food is not healthy for anybody.”

Timur receives his own food. In addition to hay and corn he gets six liters of feed and two liters of vegetables a day. He has gained a lot of weight since the beginning of his friendship with the tiger and, according to the park’s vet, “looks like a balloon ready to explode.”

The companionship has been good for the tiger’s nerves. Before his friendship with the goat, the Amur would roar all day and night. Now, he is calm and the two are stars not only in Russia, but all over the world.

Canadian news reported on them, and a South Korean film crew has immortalized the friendship with a documentary by Sooyong Park, who made The Endangered Emperors of Siberia about Siberian tigers.

“This story showed to all people on all continents that the animals are smarter than humans – they don’t have racial prejudices and hatred toward one another,” Mr. Park said.

The park is currently installing 16 web cameras to turn the story into a reality show. Soon, those concerned if Timur is alive and will be soothed with real-time proof. 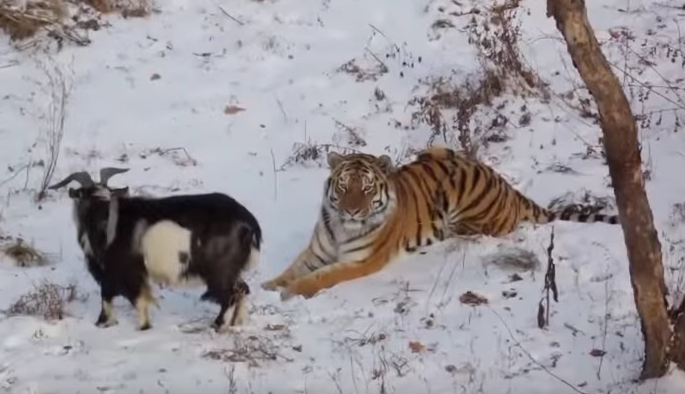