In May 2014, The World Values Network honored Sean Penn for saving the life of a Jewish businessman left to rot in Bolivia. My organization was roundly criticized, with many accusing Mr. Penn of being anti-American and even anti-Israel. This week Mr. Penn traveled to Israel to laud an Israeli humanitarian organization that saved lives in Haiti and suddenly all the critics shut up.

The fight for the State of Israel has been fiercely waged in Hollywood. We are living in a time when public figures who make statements that can in any way be interpreted as an approval of Israel—or even acknowledge Israel’s right to exist—are met with a torrent of hateful calls for boycotts and condemnation from hordes of anti-Israel followers. Roger Waters of Pink Floyd is one such crank who will always rear his head when a celebrity does an event in Israel. It is a very sad time when the forces of anti-Semitism can be so rabid that they would love to see the only democracy in the Middle East weakened and destroyed—no doubt to be replaced by another human-rights-abusing dictatorship.

That is why Sean Penn’s recent trip has been such a blow to the anti-Israel BDS movement, and a victory for the Jewish state.

This is Mr. Penn’s first visit to Israel, where he gave the commencement speech for an IsraAid conference. IsraAid is an Israeli-based NGO known for quick and effective disaster relief to emergencies around the globe. The organization provided relief in Haiti following the massive earthquake of 2010—focusing on rebuilding a nation still suffering deeply. I personally visited Haiti after the earthquake and the carnage I witnessed was unspeakable.

Mr. Penn himself is one of the few celebrities who puts his money where his mouth is. His organization, J/P Haitian Relief, came to Haiti just after the earthquake, and Mr. Penn planned to stay for a few weeks. Instead, he took up residence, living in a three-bedroom house with 20 other people for a year.

I was guided by the Jewish principle that the emphasis is on action, not words and opinions—he who saves one life has saved a universe.

During Mr. Penn’s remarks to IsraAid, he hailed the amazing work done by the Israeli organization. Mr. Penn explained how “their logistics were just more sound, and sincerity in purpose was more complete.” He added, “The indirect impact of IsraAid is that everything that JP/ HRO has accomplished would not have existed without the inspiration and support that they provided.”

Mr. Penn’s praise for an Israeli organization’s humanitarian work is priceless. After the conference, Mr. Penn met with former Israeli President Shimon Peres, at the Peres Center for Peace in Jaffa. A photo of the actor, whose father was Jewish, and the elder Israeli statesmen went viral, and was a victory for Israel and one of the biggest celebrity endorsements picked up in years.

Whether it was his 2003 meeting with Saddam Hussein’s Deputy Prime Minister Tariq Aziz, his calls to impeach George Bush in 2007, or his praise for former Venezuelan President Hugo Chavez—whose policies have now led to a total collapse of the Venezuelan economy—Sean Penn’s perspectives on politics and world leaders has, in my opinion, been off the mark.

Nonetheless, Mr. Penn’s humanitarian activities have been exemplary. That is why World Values Network chose to give him an award for his work in helping Jacob Ostreicher, an American entrepreneur and Orthodox Jew who was arrested on trumped up charges in Bolivia in 2011 while overseeing a rice growing venture. Mr. Ostreicher spent 18 months in Bolivia’s Palmasola prison, an infamous complex described by The New York Times as “a squalid prison.”

Mr. Penn heard about Mr. Ostreicher’s case and traveled to Bolivia on what he called a “humanitarian operation” during which he managed to sneak Mr. Ostreicher across a hostile border and back into the US. Mr. Penn didn’t know Mr. Ostreicher and had no obligation to risk his life in order to save him. Still, he chose to put himself in danger to help this man, for the simple reason that he was another human being in need.

Mr. Penn is firmly in the camp of celebrities who believe Israel is a nation that practices righteous action.

I received huge criticism from those who felt that honoring Mr. Penn with an award was inappropriate given his past political stances. Many believed his left-leaning tendencies were an indication that he was anti-Israel. However, I was guided by the Jewish principle that the main emphasis is always on action, not words and opinions. And he who saves one life has saved a universe.

Judaism teaches that we should not let grudges, egos, or differences in outlook hold us from allying with even major ideological rivals in order to help those in need. The goal is always to bring light and goodness to the world. When people like Mr. Penn are devoted to human rights causes, and have even put themselves in dangerous situations to help others, it is worthwhile to recognize and help strengthen their activities for the benefit of humankind.

Although Mr. Penn has criticized some Israeli policies, I am glad to know he is firmly in the camp of celebrities who believe Israel is a nation that practices righteous action. Hopefully his trip will give other celebrities the courage to publicly support the Jewish state and stand up to the bullying attempts of BDS and other forms of anti-Semitism.

Furthermore, if an influential celebrity humanitarian is willing to lend his image and presence to praise the State of Israel’s global humanitarian outreach, perhaps some of the ill-informed masses of the world will rethink the demonization of the Jewish State that is both appalling and rampant. 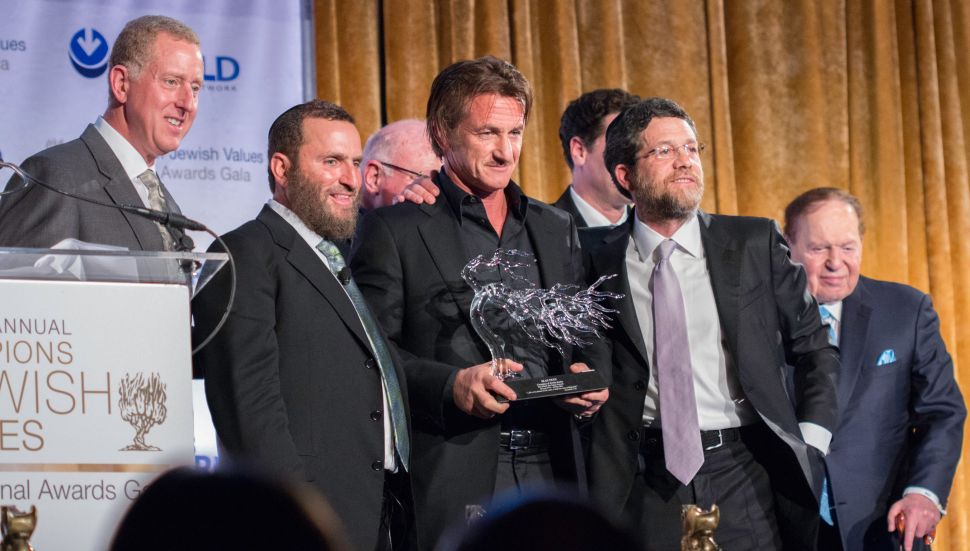