Can you feel it? 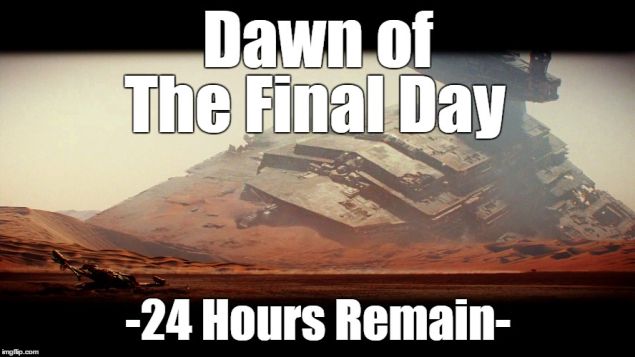 It’s almost here. In just a few short hours, we’ll all finally get to see Star Wars: The Force Awakens. I can’t remember being this excited for a movie and I sense many more people who feel the same way.

When it hits you that Star Wars is out tomorrow #ForceAwakens pic.twitter.com/9CAkHAMJnR

That feeling when the new Star Wars movie finally comes out 😄 https://t.co/eW4iotaxBN

Something for those getting a little TOO excited about the release of the new Star Wars movie. pic.twitter.com/wzFUacXT4G

Even if the merchandising has gotten a little out of control.

Every time I see some sort of Star Wars marketing tie-in. #maytheforcebeprofitable pic.twitter.com/T2olZspyqy

And the name is still, let’s be honest, a little silly.

This is the kind of Star Wars I can relate to. pic.twitter.com/4eZI8eWprH

Already, people are making plans for their screening. Some are making sure they have the perfect hairdo…

While others are going out of their way to be the most hated people in line. Like this Sith Lord here, for instance.

Might go see Star Wars, so in case I do, I needed a new shirt pic.twitter.com/vQvB3OKg0e

All the while, people are reminiscing about the series and remembering how groundbreaking those first movies were. For multiple reasons.

Even people who don’t like Star Wars (those poor souls) are feeling the power of the Force.

when you're not really into star wars but you support your partner who is pic.twitter.com/XTGcRbkW3F

This is me not caring about the new Star Wars movie. pic.twitter.com/sIeqWm14r6

(That Photoshop job is a lot of effort for someone who doesn’t care. Just sayin’.)

The excitement was only fueled by early reviews. Is it possible? Could a new Star Wars movie actually be good?

It’s good to know the movie itself is more than just flashy special effects, though there are obviously plenty of those.

Wow, the practical effects on the creatures in the new "Star Wars" are so lifelike. pic.twitter.com/zm3U1qs5m6

And as Tumblr user SteveInASpeedo pointed out, The Simpsons knows one way the movie could be even better.

Of course to all this excitement, there is a dark side. (That’s the last one, I promise.) Since the movie had its premiere earlier in the week, the internet has become a minefield of spoilers. Fans who don’t want to know anything about the movie going in have had to tread very carefully.

Trying to avoid Star Wars spoilers, but it's your job to be on the internet pic.twitter.com/m3tBq6C5PZ

And warn anyone they might possibly interact with online to about the consequences for speaking too specifically about the plot.

This of course makes them very easy to troll.

WARNING. THIS IS A MASSIVE STAR WARS SPOILER. pic.twitter.com/c7OfZOZvAm

Some are unfortunately taking the trolling too far, though. Over on Reddit, some people with nothing better to do began deliberately spoiling the movie on the site’s front page. It’s made many of the site’s users angry. Very angry. 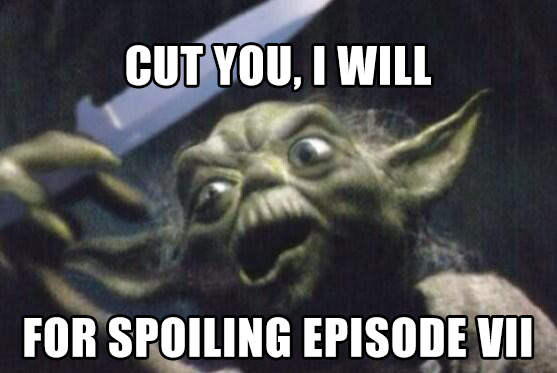 The site’s moderators have been deleting the offending posts and banning users to combat the onslaught of spoilers. Aren’t you glad you don’t have their job? 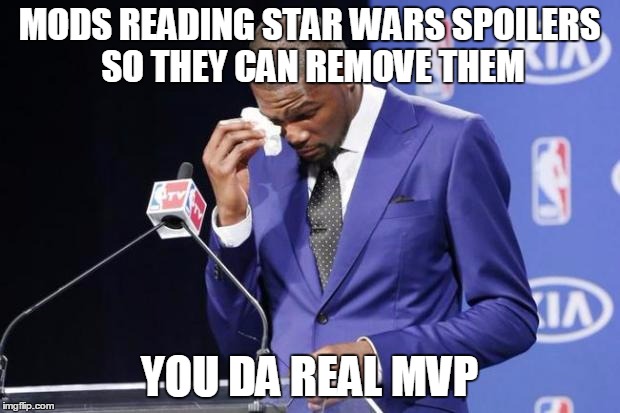 Though as many of the site’s own users will tell you, Reddit can still be a terrible place with the most messed up priorities. 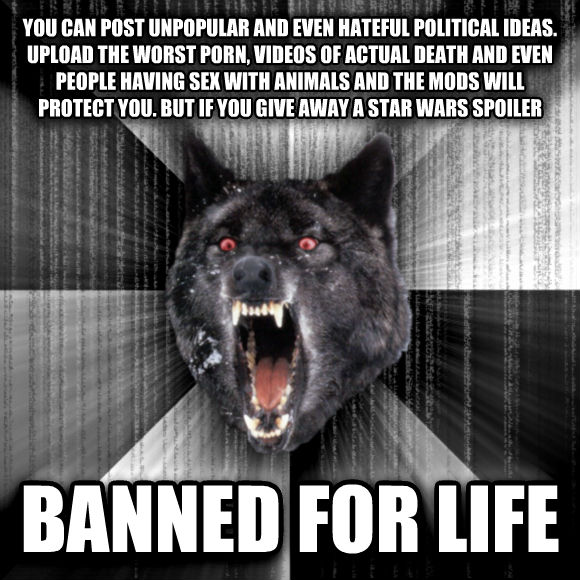 Still, no matter where it happens, being spoiled on something like this sucks.

Even the Philadelphia Police agree.

So please, lets follow the advice of a wise Jedi knight.

And hey, even if you do get spoiled, remember that there’s another one of these coming out next year.

Is it too early to start the hype train for this one?