Women aren’t supposed to be angry. Apparently this is as true for Kryptonians as it is for humans. And Kara Danvers has an awful lot to be angry about — she’s working a low-paid administrative job for an extremely demanding boss, she’s learning how to be a superhero while being undermined at every turn, her foster dad died mysteriously while working for the DEO…and James just invited Lucy to Game Night. Forgive her for being a little frustrated.

The trouble is that Kara has yet to learn how to use her anger as one of the many physical and mental tools in her hero arsenal. By now, her body is strong, and her fighting skills are top notch. She’s made mistakes along the way, but she has a basic understanding, at this point, of how to fight the bad guys while staying likeable enough in the eyes of National City. She also has learned how to conserve her strength and take care of her body, so that she doesn’t harm herself too seriously.

But anger is another matter. Kara does not have a lot of practice expressing it, and in “Red Faced,” she learns a fundamental truth about human anger: if you bottle it up for long enough, it will explode. And exploding, in this case, means two key outcomes: the android Red Tornado, which feeds off of human emotion, escapes from Supergirl after she unleashes fierce rage upon it; and Cat buys Kara a martini or three after Kara screams in her face at the office.

The latter is certainly preferable to the former, in part because it gives us a new scene of Cat Grant offering badass wisdom. In this episode, her advice is simple: “Find the anger behind the anger.” In other words, when we allow rage to build up over time, we often lash out at people who are not actually responsible for our anger. The only way to fix the anger, then, is to find the source.

In the Supergirl pilot, Cat quipped about processing her mother in therapy. In this episode, when we actually meet her mother for the first time, we can see why that need exists — Mrs. Grant is extremely dismissive of her daughter’s vast accomplishments, even forgoing dinner with her daughter during a visit to National City and dining with Toni Morrison and Margaret Atwood instead. Not that anyone should ever give up the chance to hang out with the visionaries behind Song of Solomon and The Handmaid’s Tale, but Mrs. Grant didn’t even invite Cat along! That’s poor form.

So it’s logical, then, that Cat’s anger stems from her relationship with her mother. The key is that Cat already knows this, and it allows her to channel her anger strategically. She may lash out at Kara when she really just wants to scream at her mom, but she moves past that anger quickly, in favor of mentoring Kara and offering her praise when deserved. She can’t avoid being angry, but she can use it carefully, in order to be a good boss and an empathetic human.

But Kara still doesn’t understand the source of her anger. Surely it’s not really Red Tornado, a monster she has never seen before and who will surely never appear again. What could he possibly do to stir her ire so severely?

During a boxing session with James, Kara realizes that her anger is far deeper than she ever could have realized: she’s been angry for as long as she’s been on Earth. “My normal life ended the second my parents put me on that ship,” she tells James. “And that makes me so mad.” Kara is mad that she will never have a relationship like the one that James has with Lucy, a relationship between two people who can truly understand every facet of each other. She is mad that she is so far from her home and family. On some level, she is grateful to no longer be living a lie, but as she articulates in the boxing room, “Being myself doesn’t make me feel more normal.”

But soon, she does begin to learn how to harness her anger and use it effectively. She ultimately is victorious over Red Tornado, as we knew she would be, but it’s because she channels her anger toward him in a meaningful way, and not by flailing it around haphazardly. “Red Faced” provides a nuanced look at Kara’s emotional state, suggesting that these elements of her personality will be among her key tools down the road.

And, as is slowly being revealed, the ultimate enemy is starting to look a lot like Hank Henshaw. At Alex’s request, Winn hacks into the DEO’s computer system, which ultimately leads him to uncover deleted, redacted documents about Dr. Danvers’s death. The person responsible for burying the documents? Henshaw, of course. And the documents reveal that he was the last person to see Danvers alive. The mystery of the glowing red eyes continues, but we’re getting a lot closer to figuring out what’s going on. 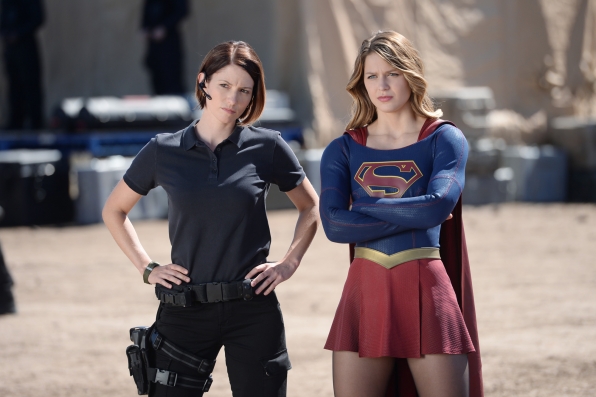