Three weeks deep into the corruption trials of both Skeloses—and a day after a jury convicted former Assembly Speaker Sheldon Silver in parallel proceedings—federal prosecutors continued to air audio obtained through wiretaps. Most of the calls aired today were between the younger Mr. Skelos and Bjornulf White, an executive at Abtech, a treatment start-up for which the politician’s son worked in multiple capacities.

The two discussed how the then-State Senate majority leader had Mr. Mangano, a fellow Long Island Republican, urge his friend the Democratic governor to support public-private partnerships, or P3s, to rebuild infrastructure—which required extensive reconstruction after 2011’s Hurricane Sandy. Abtech, which had already secured a small contract on Long Island, stood to benefit tremendously from such arrangements.

“Secretly, Ed Mangano’s been pushing for P3s with Cuomo, and apparently has been doing it pretty heavily,” the younger Mr. Skelos told Mr. White in a conversation from February 26 of this year, adding that his father was working to ensure such initiatives sailed through the State Senate. “I was told nothing’s going to stand in the way.”

The younger Mr. Skelos was meanwhile arranging for Mr. White to meet with Republican elected officials all over Long Island to get them to endorse public-private partnerships for infrastructure, and then following up with the same officials personally when he attended their fundraisers with his father. Mr. Cuomo signaled in his executive budget that he was interested in having the state undertake such “design-build” projects, in which the government partners with a single contractor that handles both engineering and construction of public works.

This prompted the Skeloses and Mr. White to try to get Suffolk County State Senator Thomas Croci to sponsor legislation that would allow municipalities to use design-build P3s for treatment—which the younger Mr. Skelos told Mr. White would play into the governor’s psychology.

“Kind of make him think it’s his idea, and you’re supporting his agenda. That’s the way to do it,” Mr. Skelos said in a March 6 phone conversation.

At one point, the state senator’s son agreed to pick up a list of talking points from Mr. White and personally hand them over to Mr. Mangano, saying it was “safer” to keep the Nassau County executive in the loop that way.

Unbeknownst to the younger Mr. Skelos, Mr. White had become an FBI informant, and federal agents were using him to extract information for the criminal complaint against the Skelos family. The state senator and son stand accused of pressuring companies with business before the state, including luxury developer Glenwood Management, of arranging payments to the younger Mr. Skelos.

The phone conversations between father and son played today became increasingly brief and deliberately vague, with an undertone of tension, given Mr. Silver’s arrest in January.

It was a sentiment the Skelos scion echoed angrily in another call from a month later, lashing out at U.S. Attorney Preet Bharara, who brought the fraud and extortion charges against Mr. Silver—and, in May, against the Skeloses for unrelated but similar crimes.

“You don’t talk normally because it’s like fucking Preet Bharara is listening to every fucking phone call. It’s fucking frustrating,” the 33-year-old raged.

The recordings also captured the son telling his father to communicate with him using Facetime, since such video calls do not appear on a phone bill. It was a tip the younger man also shared with Mr. White, in a conversation in which he also casually talked about cheating on his wife.

Mr. White also wore a wire to a February 13 meeting with the younger Mr. Skelos. In the audio from the rendezvous, the senator’s son unintentionally corroborated testimony from Glenwood attorney Charles Dorego that the lawyer had gotten Mr. Skelos work with Abtech—in which Mr. Dorego and Glenwood founder Leonard Litwin owned a large stake—as a covert means of funneling money to him, despite the 33-year-old’s lack of qualifications.

“Charlie being the one who got me involved in Abtech,” the accused man said in the recording. “I was like, ‘well, I literally know nothing about ‘—you know, any of that stuff.”

Updated to expand on what kind of design-build public-private partnerships Mr. Cuomo and the Skeloses supported. 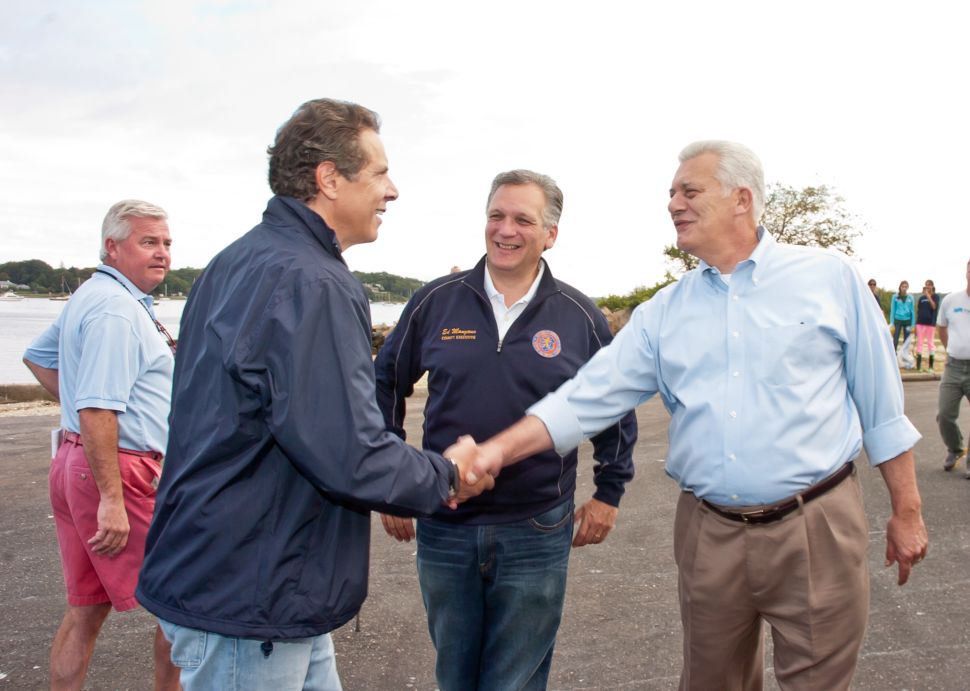