My arms scrape both walls as I descend the narrow staircase to the basement of Unnameable Books in Prospect Heights, the perfect setting for a talk on tarot, held by the New York Obscura Society. Books are stacked in asymmetric drunk-Jenga piles. The room’s dank must can only have come from old books.

When Enrique Enriquez, author of Tarology: the Art of Tarot and tonight’s lecturer, enters, every folding chair is filled. “The official history of tarot cards has been defined by con men and madmen,” says Mr. Enriquez, looking dapper in a suit, fedora and eyeglasses with one frame round, the other square.

Invented in the 1400s as a gambling game, tarot was redefined in the 1700s by a French charlatan who bestowed it with false predictive power.

Mr. Enriquez discusses tarot in terms of Pataphysics, “the science of imaginary solutions.”

Mr. Enrique’s rate sheet for readings is a lengthy note about fees that begins, “The cost of consulting the tarot varies accordingly to the nature of the questions asked.”

He then expounds on parallels in the cards—the mother in one card may be the grown version of a child in another, which prompts a primer on tarot symbolism. Mr. Enriquez displays a chart equating a coat of arms with pubic hair, mentioning sex as “a bumping of shields.” Next slide: a sculpture consisting of a crowned vagina being held aloft by three upright penises with tails. Mr. Enriquez tells us pilgrims apparently wore this in the 12th century, and relates the vagina to the fatal wounds of Christ. Somehow, this correlates to tarot. I ask the woman next to me if she understands. “Parts,” she admits.

Mr. Enriquez later tells me he emigrated to Manhattan from Venezuala more than 15 years ago to direct a small animation studio that failed. Feeling alienated, he decided to read tarot in a cafe to have “a conversation with the city.”

Mr. Enrique’s rate sheet for readings is a lengthy note about fees that begins, “The cost of consulting the tarot varies accordingly to the nature of the questions asked.” It goes on, “As a general rule, an unimaginative question will be charged twice the price of an imaginative one,” and, “any puerile pursuit will be punished by a high fee. Such fee will decrease proportionately to the percentage of marvel implicit in the question, to the extent that an absolutely wonderful question will be answered for free.” At the end, though, his overall rule: “pay what you think this is worth.”

I mention similarities between his use of tarot and the morning pages from The Artist’s Way, which direct readers to write three pages first thing in the morning to clear the mind, thereby leaving it open to new ideas.

“Yes. At least the way I do it,” he says. When people mention psychic powers to him, he says, “I don’t know what that is. I don’t do that.”

He shares a story of his days spent reading tarot at a bookstore: “There was a huge tree outside,” he says. “What I learned after that time looking at that tree is that trees have no questions. You look at a tree, and there’s no hint of anxiety about what a tree is, or [what it’s] supposed to do. Life is happening the way it happens. That taught me not to rely too much on questions. I don’t ask questions to the tarot. I just inhabit that space.” 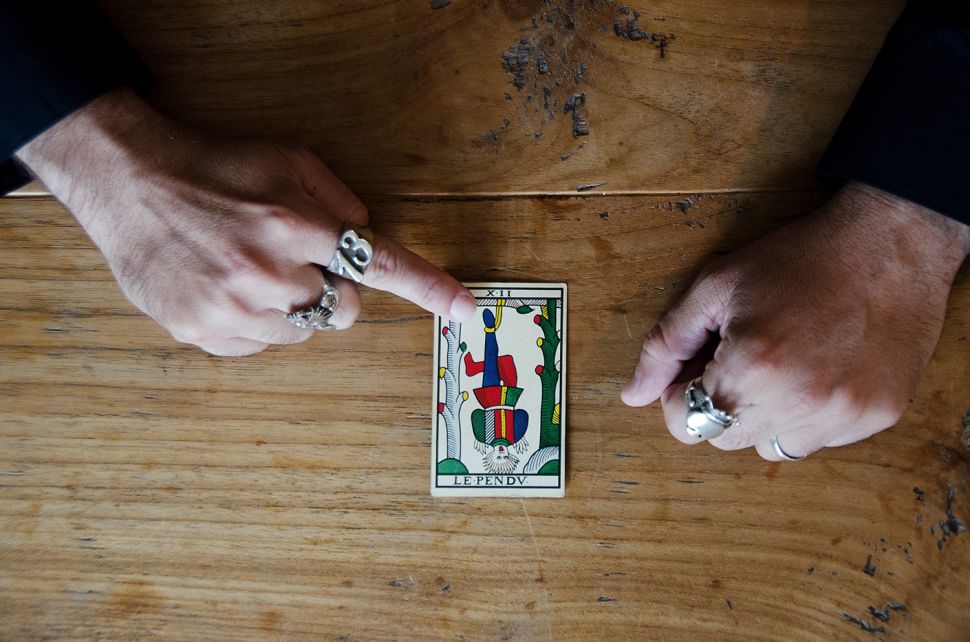