And now for something completely relevant, let’s compare The Affair to Twin Peaks.

For those who didn’t catch David Lynch’s fever-nightmare-disguised-as-soap-opera on the first go-around, or who didn’t watch it in one, madness-inducing shot like I did, Twin Peaks revolved around the mystery of who killed Laura Palmer. Oh, it was actually about a lot more than that–terrifying dancing dwarves, murder demons, wormholes to other dimensions, talking logs, beautifully composed modern pop-rock–but essentially, yeah, it was all about the Laura Palmer mystery. The problem here was ABC got all kinds of antsy, and basically demanded David Lynch reveal the killer before he wanted to, lest viewers get bored. Lynch, for his part, left his meditation cave on the side of a snowy cliff long enough to reveal the killer, and the show immediately tanked in both quality and ratings. Lynch dipped to go write Wild at Heart, the narrative of Twin Peaks became way too much about chess, horticulture, and horribly racist caricatures, and audiences were like “yeah, really wish that whole Laura Palmer thing would come back up.”

So, what does this have to do with The Affair? The Affair is the complete, polar opposite of Twin Peaks, in that I really, really, really, really do not care who murdered Scotty Lockhart. I wish I didn’t  wish I still wanted to come up with alternate dimension, alien conspiracy theories to try and solve it, but I just don’t. I care who killed Scotty Lockhart about as much as Noah cares about the sanctity of marriage. I care about as much as Cole cares about facial hair grooming. I care about as much as Helen’s mother does about not being casually racist toward the hired help. Book-ending every episode with a new piece of evidence in the Scotty case and everyone looking at each other like -____-  isn’t exactly floating my old, blue boat. I truly, truly feel like The Affair would be a better show if it solved its “mystery.” Got it out of the way. It’s not a great sign that I enjoyed Noah talking about his father for half an hour last week more than I’ve enjoyed anything murder-mystery related this entire season. Remember two weeks ago when 0% of the episode was dedicated to Scotty’s murder? Yeah, that was the best thing The Affair has done since the one time I thought it was just Lost.

God, I’m being such an ABC right now. No one wants to be an ABC. We all should really shoot to be HBO’s, even if we miss and land among the Starz.

Let’s focus on the Max stuff, because it was the meatiest portion and it led to the BIG REVEAL of Max testifying he saw Noah suspiciously using a hose. Kudos to Dominic West and Josh Stamberg  for just being two fine actors, but especially Stamberg for elevating Max beyond the funny Wall Street guy that does back workouts in his office. But really, despite her not even appearing in this episode, this scene was about Helen.

Listen to the way Noah and Max talk about Helen: neither of these men really love her. Max really thinks he does, but [cliche alert] he really loves the idea of Helen, the unattainable girlfriend of your long-time best friend. “What do you have that I don’t?” Max asks Noah, taking into account exactly none of the reasons he himself could have driven Helen away.

And Noah, Noah can’t really get past the difference between love and sex so we can’t really say who, if anyone, he’s ever loved in his life.

Even his opinion toward Helen’s new boyfriend is “I don’t know, I’m not fucking him.”

If Noah was hired to write Valentine’s Day cards, they would just be a heart with the words “Let’s Fuck” written in glitter on them. Because in Noah’s world, it is inconceivable that love could separate itself from sex. It’s why the affair of The Affair happened in the first place. The first Montauk local to give him the sexy-time look at the local jam festival became THE ONE, MY MUSE, MY SOUL-MATE until the whole thing got less sexy. Noah is that guy you knew in college who didn’t really know a girl, but still called “dibs” on her. That guy was an asshole. No one should be that guy.

That’s kind of the cool thing about The Affair; no one on this show wants one thing. Most of them want ALL the things. Noah wants Alison, but also in a weird territorial way Helen, but also to be a successful writer, but also to not sell out. Alison wants Noah, but also kind of still Cole, but also to build a life for her own away from the both of them. Cole wants Luiza, but also Alison, and also to come from a family that isn’t made up of drug bandits. Helen, jeez poor Helen, Helen just wants nothing to do with the lot of them. But, also, she doesn’t want to let anything go.

That, for better or for worse, is what The Affair does well. It draws multi-layered characters and has them interact. What it is not, is a whodunit. Max testifying against Noah is so much more interesting in the context of a continuation of the scene above, and not as a part of the Scotty trial. Unless BOB ran Scotty over with his car, I’ve had just about enough with all that.

You can tell Noah’s not a Big Bad from the way he reacts to Max’s confession about Helen. There’s no James Frain-level plotting going on. (More like James Frey, in that Noah is very good at pseudo-fiction.) He’s just all Raging Bull. Or, what immediately popped into my head during that moment, the guy from Waiting for Guffman auditioning with a scene from Raging Bull.

Now, back to the plot at hand: who killed the world’s most killable character, Scotty Lockhart? I guess I still think Alison did it, because she had the most to lose (Noah, her stake in the Lobster Roll, possible custody of her child) if Scotty revealed his BIG SECRET that he threatens will blow up Cole’s fucking loife, brah.

Although, let’s examine that for a second: why would Cole finding out that he has a child be a bad thing? Doesn’t he desperately want a kid to prove the old gypsy curse wrong? And Luisa can’t have a baby any more than she can stick with an accent, so…

Plus, it’s not like Cole is confused about whether or not he slept with Alison. Unless we are thinking that the baby is Oscar’s, not Cole’s, in which case…again, why would that blow up Cole’s post-Alison life? He may be mad that his partner in business–though, is it ACTUALLY a partnership if 100 percent of the money is coming from Alison and the sale of her inheritance?–is three-timing him, though what else is new?

So, Alison murdered Scotty not to keep Cole out of the loop, but to keep Noah from finding out, because by some backward law of the land, her cheating husband would still get to claim moral high ground and keep all his money (from the pre-nup, remember?), leaving Alison penniless, the Lobster Shack without financial support, and the baby going to…Cole, I guess? I mean, no way Noah would want that kid. He somehow doesn’t have enough bedrooms in his giant New York palace as is!

That’s the other laughable part about Noah being some sort of Evil Genius Villain: he’s so damn harried. Somehow, Noah makes being a best-selling author with a movie deal on the table look paltry. Do you know what Noah’s day looks like, Mr. Agent Who Loves Steinbeck? It looks like this: Noah has to keep all his papers near the shower, because there’s no room for a filing cabinet in his million-square-feet-loft. Plus, in 2015, Noah still has PAPERS. Like, plural. And they are all getting wet because his beautiful fiance needs to take a shower! That bitch. Plus, he spends an hour every day writing apology notes to his teenage daughter for trying to spank it to her lesbian makeout session in the hot tub, which seems a little…excessive. An hour writing apology emails a day? No one does that. You write one apology email, and copy and paste that shit. Come on, Noah. How did you even write Descent in three months?

Oh yeah, and the very worst thing in Noah’s life right now is that he might be confused for a populist writer. You know, the type that makes money and doesn’t have to teach college co-eds that he has trouble not sleeping with. Why does Noah still need to teach college? Isn’t he banana-grams rich, and with no alimony or child support to pay Helen? Didn’t he use Alison’s money to buy his apartment?

Oh god, so there’s another problem: Alison has MILLIONS in the bank she hasn’t touched? That’s just so shit-crazy. I thought this show was all about classism–after all, how heart-wrenching was it to see Mare Winningham reuse her American Horror Story: Hotel costume to play another laundress?–but all this time, both the Lockharts and the Solloways AND Baileys are sitting on just piles of cash that they don’t want to touch out of pride (or something?) Like, Cole won’t touch his ex-wife’s money that she’s offered to split with him to save his mom from a life of indentured townie servitude, but he WILL go in on this plan dreamt up by his coked-out brother so his new girlfriend can wait tables in his own damn restaurant? That logic is faulty at best, and lazy character development at worst.

So Noah, here’s my one question for you: instead of being all outraged over Max’s indecent non-proposal, why didn’t you just PAY HIM BACK? And then, when Alison mowed over Scotty (which she totally did) and got you to clean up her mess for her (ditto), why didn’t you tell your lawyer about that $50,000 loan? It would have totally discredited Max as a witness to know he was owed that much money by the suspect.

Maybe because, like his agent and Max agree on this episode, Noah is too busy living like Butch from Pulp Fiction. That little sting he feels is just pride fucking with him, but in Noah’s case, we know there’s nothing he likes better than a good fuck. 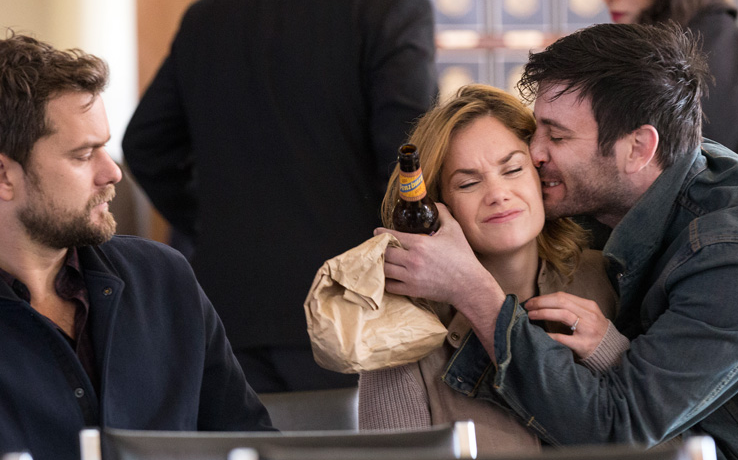