Yeah guys, we’re changing up EVERYTHING for the big finale. I go first now, bitches! And I’ve just got one thing to say:

Like, can that just be my whole recap? Just Heath Ledger slow clapping in jail, where he will hopefully end up sewing an explosive into world’s-worst-man-that-somehow-still-isn’t-technically-a-murderer, Noah Solloway? No? Argh. Okay, what if I throw in one of these babies? Hot off the presses from a review of Dangerous Liaisons in The Guardian? 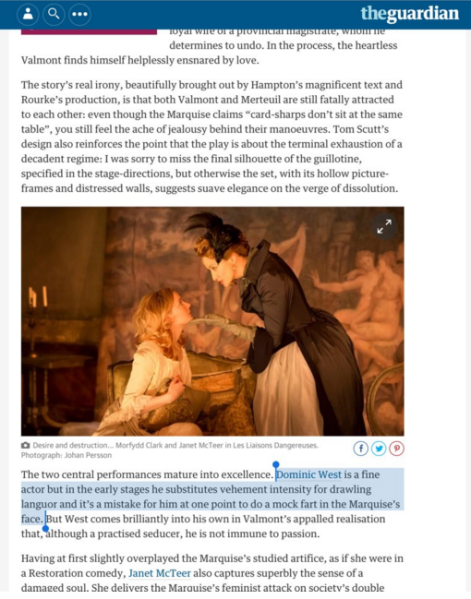 Dominic West knows that in order to land any great delivery, one must always end with a mock fart. If you’re looking for where he put the mock fart in the epic finale of The Affair--which, hand to god, took me two hours to watch, though I’m unclear if that was the actual length of episode time or if it built an extra hour of pausing to slow clap–well, I like to think he’s  been mock farting this whole time, ladies and gentleman. Mock farting in all of our faces.

Because at the end of the day, who was a bigger McGuffin than Mr. Solloway? The guy who seemed so villainous to Vulture just last week was revealed as nothing more than an accomplice after the facts, twice over. The first time, he forces Helen behind the wheel after they have drunk ocean sex during Cole Lockhart’s wedding. See, Noah can’t drive, as he’s having those same hallucinatory flash-forwards from the beginning of the season, except now they are flashbacks to his whole time in Montauk.

So yeah, forget Scotty’s death and subsequent murder trial, y’all! Noah Solloway, voice of his generation-ish (besides Franzen!), has become unstuck in time! And now he can finally write that bestselling autobiography, Solloway-five!

Noah is therefore on-hand to witness the death of Scotty Lockhart, which happens when an already DUI’d Helen runs him over with Solloway’s car. WOMP-WOMP! Sorry, that’s the sound Scotty’s body made. But also, Vinnie and I called this exact scenario earlier last week: 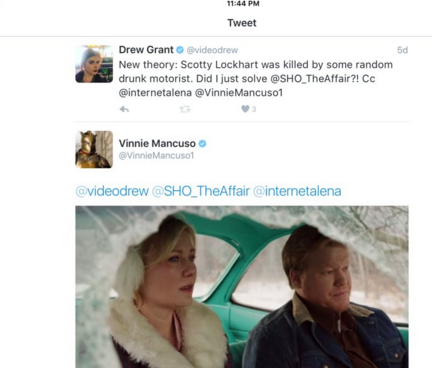 Has Vinnie become unstuck in time as well and traveled to the future to connect Sarah Treem’s finale to the other worst couple on TV in recent memory? (Aside from Noah Solloway + Alison, of course.) Because Solloway is Blomquist-ed twice: not only did his ex-wife run over the guy who knocked up their daughter and ruined her life and also (he believes, or at least we’re supposed to believe he believes) may have knocked up his fiancee (see the way Alison just informs him in her timeline that Joanie isn’t his, but also doesn’t specify whose kid she might be while they are watching Scotty sexily howl like The Animals?); he also knows that Scotty was pushed in front of the car by Alison, mostly because he has super-hawk vision in her timeline where he can see her mouthing the words “I pushed him” a billion times from the underbrush. (Where there was a rowboat? That’s a weirdly novelistic detail to include, but sure.)

HA HA but also *mock fart*: Noah decides to fess up to Scotty’s murder rather than face the wrath of the two women in his life who psychically colluded with each other, probably through their moon cycles, like Luisa. I mean, it’s so perfect: Helen and Alison BOTH killed Scotty while Noah cleaned up the mess. Which he totally deserves to do, having mock farted in both their faces oh-so-many times before. Though we now know Noah is innocent of the main event, throwing him under the bus (so to speak) seems not only fair (he did cover it up, it’s his car, he’s implicated beyond belief and everyone knows it) but right. Justifiable, even. Somewhere, perhaps in some celestial afterlife–where Scotty is forever snorting blow off the hardbody of some angel at The End–a ledger has been balanced. It’s some pretty perfect script writing 101 shit. Good job, Sarah Treem. Though I do stand behind this Internet guy’s comments about The Affair in general:

I may have just seen the single best episode of a TV show in the history of ever-anything. Was worth the 21 episode buildup #TheAffairFinale

Like, that was a GREAT payoff, no doubt. But was it worth 21 episodes great? Was it worth all the fan theories and multiple perspectives and endless nattering about Oblivion and the feud and the ranch and the house (whose house? Just pick a house!) and the Lobster Roll, Martin’s stomach ache, Noah’s daddy issues, and oh god, just like Oscar and Max just in general? Was this (approximately) two hour season finale worth the wait, which seemed as endless as the sabbaticals between Noah’s books?

I’m…honestly, not sure. At times, I’ve loathed The Affair. Having to watch it was a chore; my Sunday night resentment for it only matched by my loathing for True Detective Season 2. Finding out Treem had a master plan all along doesn’t give me those hours of my life back, although the encouragement by the show’s writers on social media sure helped even those dark hours.

On the other hand, I kind of want to go back to the beginning of the second season and watch it all again, knowing what I know now. (There are still some major questions: does Helen know that Alison pushed Scotty? Does Cole know that he has Joanie? Does Cole know who killed Scotty? Has Cole ever known anything?) I mean, I won’t do that, because once bitten, twice SITTING AROUND THE DINNER TABLE WITH A TERRIBLE SECRET BETWEEN THEM. *HINT HINT* IT’S MURDER. But like, in theory, that is totally something I’d be open to doing.

And I guess, yeah, if a decorative rock with my name on it was forced to my head and I had to pick a reaction about The Affair (other than the slow clap, of course), it would be this: The Affair is evidence of what real art can do in the television format, in these final days before everything becomes one streaming binge; when nothing can be spoiled because everything is known.

Perhaps the question of Who Killed Scotty Lockhart? isn’t as inherently interesting as Who Killed Laura Palmer?, but I’ll tell you…the payoff was a million times more satisfying, not the least because Treem had known what the answer was this whole time.

If The Affair and I were married, The Affair would totally cheat on me. It’s understandable. I ask far too much of it. Last season it gave me the perfectly fine differing viewpoints format, and I demanded alternate dimensions. When it bought me a lovely murder mystery for Christmas, I sighed and told it I wanted aliens. “Why can’t you just be more like Lost?” I said, referencing one of my many exes. “Or Twin Peaks?”

Even during last night’s super-special-extended-by-8ish-minutes season finale, I asked for too much. I wanted Helen and Noah’s drunken beach shenanigans to transition seamlessly into the opening from Jaws. I wanted a big reveal that Scotty Lockhart is a werewolf–no fuck it, I wanted the Lockharts to be one giant family of werewolves–and that’s why Scotty was walking down the world’s foggiest road at midnight.

All the while, The Affair was building towards an end (or THE END) that wasn’t weird, or outlandish, or mind-blowing. All it did was make total, complete, absolute sense.

So here’s the solution to “who killed Scotty Lockhart?” EVERYONE killed Scotty Lockhart. Helen, who already has a DUI to her name, was driving the car. Alison pushed him into the road. Even Cole, who wasn’t at the scene of the crime, drove Scotty off his three-month sobriety. Amazingly, hilariously, and so appropriately the person whose only contribution to Scotty Lockart’s death was “uggghh I’m so drunk OH NO MAYBE THAT WASN’T A DEER, HELEN” was Noah. How could we ever have thought Noah capable of cold-blooded murder? After two full seasons of watching Noah operate, I’d be shocked if Noah could commit petty theft without slipping on a banana peel.

I always thought The Affair was 99% about the actual affair, and the murder mystery was just a little side-dish to keep the people not infatuated with Dominic West’s goblin orgasm-face coming back. But of course the answer to “who killed Scotty Lockhart” is intertwined with the idea of the affair itself. On one side there was always Helen, and on the other was Alison, and caught in the middle fumbling, bumbling, and stumbling (into the same hot tub as his daughter) was Noah. Why should Scotty’s death be any different?

My favorite part of this resolution, besides all of it, is how preferable telling the truth about Scotty’s death to the police would be compared to every single thing Noah, Helen and Alison have done in the aftermath. Okay, to be fair, I’ve never accidentally killed a girlfriend’s ex-brother-in-law before. Well, at least not with a car. So I don’t know how all this works, or what the typical reaction should be. But calling the police and telling them the known alcoholic AND drug-dealer got hit by a car is much less suspicious than going back to the wedding and slow-dancing the dance of murder-conspiracy to the tune of Simon and Garfunkel as covered by shitty wedding band. Yeah, Helen gets boned pretty bad because based on my legal knowledge, second offense DUI + vehicular manslaughter = RUH ROH. That’s the one part I didn’t quite buy about the finale, that based on the revelation Joannie is actually maybe-Cole’s daughter and one drunken beach swim–that, again, involved no sharks–Noah is willing to throw everyone under the proverbial bus to protect Helen.

So what do we think happened in the interim, between Cole’s wedding and Noah pulling a Jim Carrey in Liar, Liar during his own murder trial? I assume Alison and Noah sat down to many dinners knowing a horrible, dark secret. As Noah’s editor so astutely pointed out, and I’m paraphrasing here, “that ending sucks balls, bro.” Luckily, thanks to the beauty of TV and the The Affair‘s writing staff which was undercover amazing this whole time, that isn’t the ending. In fact, The Affair solved its biggest mystery and in doing so, gave us a thousand more questions. We still don’t know what role Cole and his evil glare plays in all this. Or how Whitney reacts to the death of her soul-mate werewolf lover Scotty Lockhart. Or what sad, miserable human being wants to take a Descent walking tour around Montauk.

Either way, Scotty’s dead and my interest is piqued. God, The Affair, I know I don’t deserve to be taken back, but I will be driving past your house in the rain and occasionally crying while watching your SnapChat story. Until the next doomed Montauk wedding, you beautiful hour-long Golden Globe winning Showtime drama you. 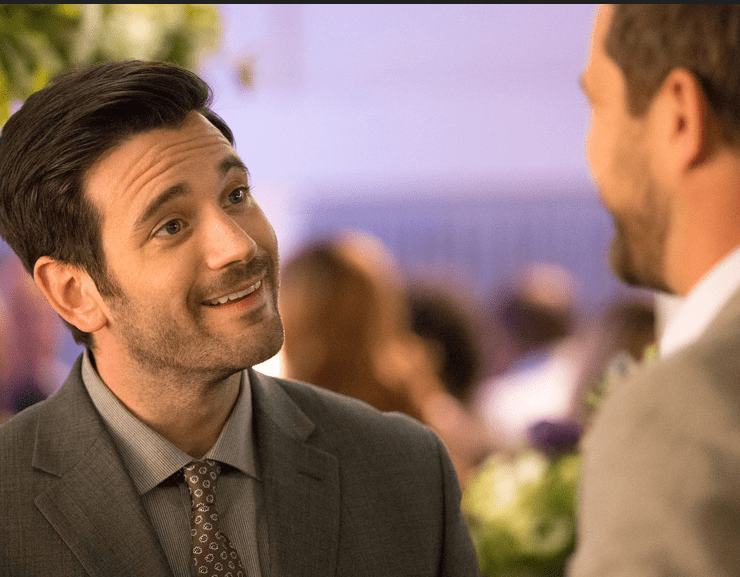