Count 2015 as yet another banner year in the deep lexicon of experimental and avant-garde music where mountains of exceptional records—from both the old guard and fresh, new talent and across myriad genres—were dropped.

The following list may carry the obligatory “best of” distinction, but we can easily pluck out another batch of stellar recordings released this past year that blazed its own innovative trail and do another round. But as much as we’d love to highlight ’15 “out” faves we spun incessantly like XE by Zs, Henry Kaiser & Ray Russell’s The Celestial Squid, Circuit de Yeux’s In Plain Speech and just about anything pulled from the catalog of the Portugal-based outsider Clean Feed label, that, alas, cannot be swung. So, dig deep and indulge in our list of 2015’s best avant and experimental albums—in no particular order.

Perfectly fitting of its assaultive moniker, Pulverize The Sound do, in fact, pulverize the living heck out of the sound with whiplashing start/stop energy music designed to snap necks. On its self-titled debut, the apeshit trio of trumpeter Peter Evans, Child Abuse/Lydia Lunch Retrovirus bassist Tim Dahl and drummer Mike Pride vomit jazzified grind-metal ragers that are as razor sharp composed and hammering repetitious as they are industrial-strength deranged. You’ll never hear the trumpet the same way again after absorbing the salvos of Evans’ bizarro circular breathing techniques, Dahl’s thuds and thumps and the sonic heaviosity of Pride, who is currently touring arenas as part of a jazz trio opening for Amy Schumer(!).

[bandcamp width=100% height=120 album=1466549017 size=large bgcol=ffffff linkcol=0687f5 tracklist=false artwork=small]Brooklyn-based alto sax terrorist Chris Pitsiokos may be a 20-something but this rising firebrand wages total war out of his horn. On any given night, the lanky punk jazzer can be found around New York City’s DIY avant scene, gigging at dingy bars, raw loft spaces and Chinatown record store Downtown Music Gallery where he works, pitting his squawks and shrieks against the likes of Flying Luttenbachers overlord Weasel Walter, no wave goddess Lydia Lunch and banjo destroyer Brandon Seabrook. On Gordion Twine, his first record as leader, Pitsiokos has joined forces with bass ace Max Johnson and Talibam! drummer Kevin Shea for a set of breakneck speed bebop-core madness that recalls the legendary Ornette Coleman’s butt-shaking swing, the schizophrenic sound world of John Zorn’s Naked City and the “brutal-prog” of Walter’s own Luttenbachers.

On her solo guitar joint Meltframe—inspired in part from her opening for The Melvins’ King Buzzo on his acoustic tour in support of This Machine Kills Artists—Brooklyn’s six-string virtuosic godhead Mary Halvorson takes your ass to shred school, showing she’s to avant-jazz what Krallice guitarist Mick Barr is to metal (and, by the way, those two have collaborated). Sure, Halvorson has swung the ax for jazz legends such as Anthony Braxton and Marc Ribot but on tracks like the fuzz-drenched symphonic metal-jazz ripper “Cascades,” she’s channeling both Barr and her tour bud Buzzo. Serious fret-hopping magic gushes from Meltframe as Halvorson covers jazz standards by Duke Ellington, Ornette Coleman and Roscoe Mitchell along with tunes from forward thinking peers like Tomas Fujiwara and Chris Lightcap.

The eardrum-destroying and mangled math-metal tsunami let loose by Philly/NY free-improv Many Arms has fried brains over the course of an epically noisy four-album stretch, earning the fandom of avant-garde jazz icon John Zorn, who released the trio’s last two records on his elite Tzadik label. After bringing guest saxophonist Colin Fisher on board for 2014’s Black Flag-meets-Coltrane blitz of Suspended Definition, Many Arms are bolstered by yet another new addition—Japanoise improviser Toshimaru Nakamura. On its eponymously-titled joint effort, the quartet go time signature-maximalist ballistic, deconstructing jazz as guitar hero Nick Millevoi’s (also of Chris Forsyth and the Solar Motel Band) gushing hydrant of prog-rock riffery crashes head on with Nakamura’s wall of “no-input mixing board”-twiddling noise.

The seeds were first planted in 2013 for this holier than thou meeting of pioneering brutarians when Japanoise godfather Merzbow, Swedish sax/electronics dude Mats Gustafsson of The Thing (who cut an album with Neneh Cherry) and Hungarian metal/jazz drums ace Balazs Pandi came together to bleed noisefest, Cuts. That alliance continues but with an art-rock and renegade improviser added into its lethal mix: Sonic Youth founder Thurston Moore. On the second marathon installment of Cuts, titled Cuts Of Guilt, Cuts Deeper, the foursome cook up a bloodbath of skronk and clatter that is drum circle ritualistic and deep as hell fire music. No shocker that earplugs are highly recommended.

Sitting neatly on the fringe fence while wearing the badge of one those “most influential bands you’ve never heard of” was the NYC-based Laddio Bolocko, a super-obscure, radical band of noisemakers who intersected free jazz, math rock and Kraut grooves to skronk-heavy perfection. From 1996 through 2001, LB—birthed from the ashes of mathy metalists craw and Dazzling Killmen and prog-rock stars The Mars Volta—flew under the radar with its all-instrumental beast of firebreathers and grooves: envision the avant-garde jazz of Albert Ayler under the influence of Kraut-rock pioneers Can.

In LB’s canon, there’s already been one set that’s documented its schizoid recorded output (2003’s The Life & Times Of Laddio Bolocko) and now over a decade later, the LB vaults have been raided again. Both a stellar find and ideal introduction, Live and Unreleased 1997 – 2000 further crystallizes these outré heavyweights to-die-for cred with rare captures of their sax and organ-fueled dronescapes and intricate Don Caballero-isms. It’s no wonder Oneida drummer Kid Millions and no wave brutarian JG Thirlwell both sing the praises of Laddio Bolocko in the package’s liner notes.

Joined by their oft partner in noisy crime, Wilco’s pedal-hopping riff monster Nels Cline, these experimentalists-in-arms transmit spiritual jams from the outer regions where Sun Ra dwells, dripping, bleeping, squelching and beaming layers of alien drone with spastic, feedback-laden licks and massaging and stabbing beats that resemble a voodoo ceremony. For the last two decades, the true conversationalists in White Out have counted honorary members such as Thurston Moore, Jim O’Rourke and William Winant into its fold, but the sonic language they and Cline share on Accidental Sky may be its apex.

Trombonist colossus Jacob Garchik totes quite the eclectic resume. For the last decade, he’s served as co-arranger for Kronos Quartet, leads a 10-piece marching band dubbed the Atheist Gospel Trombone Choir and is part of Banda de los Muertos, self-described as “NYC’s best (and only) Mexican banda.” On his latest jazzcentric venture Ye Olde, Garchik trekked even further into a mystical stratum, hatching a concept record centered on the medieval architecture found in the Flatbush section of Brooklyn.

To interpret his mythical tale, Garchik assembled a supergroup of sorts, recruiting a guitarist murderers row consisting of Brooklyn avant-jazz vets Brandon Seabrook, Mary Halvorson and Jonathan Goldberger and backed by heavyweight drummer Vinnie Sperrazza. Led by Garchik’s doom metalish gale-force blows and bluster and a small guitar army in full-on slay mode, Ye Olde invokes the arena-sized coiled rock riffs of King Crimson as Garchik’s gothic prog-jazz beast sets out to “imagine a 2015 cover of the soundtrack to a 1970s remake of a 1930s movie about the Middle Ages.”

While Garchik’s imagination runs prog-rock wild with the medieval architectural themes of Ye Olde, the conceptual vision of his trombonist contemporary Sam Kulik takes America’s national pastime and soundtracks it to avant-garde jazz. What? An Astoria mainstay and diehard Mets fan (Kulik actually performed The National Anthem at a game at CitiField this past season), Kulik hatched this otherworldly idea: he’d take a complete baseball game, set it to music and then make it available as a set of 20 collectible baseball cards featuring all the musicians who played on the record decked out in baseball uniforms.

With a natural born baseball announcer’s voice, Kulik muted his television and recorded himself doing the play-by-play of an early season contest between the Mets and the Florida Marlins and came away with the three-hour long The Broadcast. Featuring a host of Kulik’s cohorts, including members of Talibam!, Shahzad Ismaily (of Marc Ribot’s Ceramic Dog) and Mostly Other People Do The Killing bassist Moppa Elliot, Kulik’s mind-expanding The Broadcast achieves the unthinkable: soundtracking a Mets game to experimental jazz. 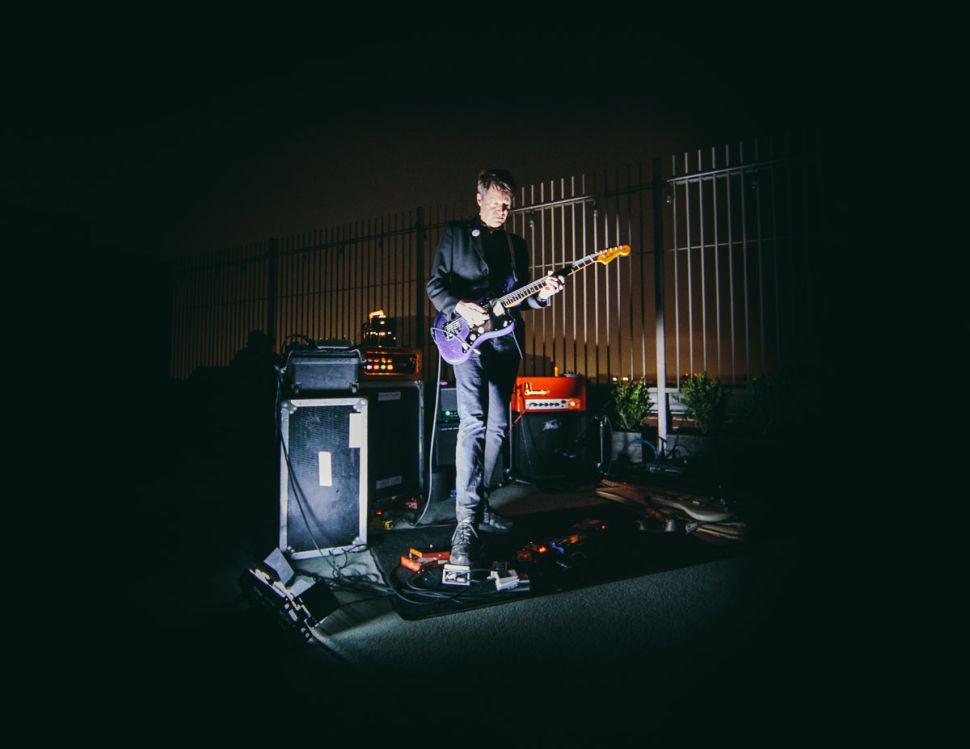