Last week on The Challenge even though I swear I watched the entire episode, it left me off midway through the elimination. It felt like it was an extra short episode but they throw out a “To Be Continued…” once in a while so I figured I’d find out who got the boot this week. I don’t know if it was just the feed I was watching or what. Either way, Cohutta and his cousin Jill got eliminated—ending one of my favorite early plot lines. Jill moved her wedding to compete on the show. So now that she is home, is the wedding going forward? Were any deposits lost? Will Cohutta be DJing? I need these answers.

This week’s episode did legitimately end with a “To Be Continued….” So basically, in three episodes I have seen a total of one actual elimination and it is still my favorite show. I don’t care if MTV ever airs one of these rounds ever again. I don’t care if they get rid of every competition. Or even better, if they kept it exactly the same but you could sign up for 24/7 live feeds like Big Brother, I would do that faster than Cara Maria can overthink a decision. Even if it was just watching drunk cousin Rianna feeding slices of prosciutto to drunk cousin Mitch for seven hours at a time. Even if it was just watching Johnny Bananas try on little straw hats for one full day. Even if it was a week straight of watching Shane sculpt his fantastic eyebrows. I am in. Sign me up.

The big twist of the season, which was apparently revealed at the end of last week’s episode but I missed it along with the elimination because I’m living in some sort of Dark City variant world where nothing is true and the Others come around atmidnight and change all of our realities around as part of some kinky space experiment, the Bloodlines are being split up. They’re separated into two teams. And since Cara Maria and Jamie won for the week, they are captains. The reaction to them being in charge of this is hilarious. One of the best reoccurring storylines over the past few seasons is people getting mad anytime Cara Maria does anything. She could be like “I’m going to eat this sandwich” and half the house will flip out and be like “Of course Cara Maria is going to eat that sandwich, ugh” and then she’ll be like “okay, okay I’m not going to eat it, it’s fine” and everyone will be like “agggghhh, of course she’s not going to eat the sandwich what is wrong with her.” And then for the next three days, shell be like “why doesn’t anyone want me to eat or not eat my sandwich?” The way the draft works is they alternate picking a veteran, and the bloodline of that pick automatically goes on the other team. Jamie’s strategy is solid, he picks mostly strong players with seemingly weak partners for a double advantage. Of course TJ has some last minute drama to add—even though the pairs are split up your fate is still tied to your bloodline.

The two teams, now called Red Team and Blue Team, are competing in an event called Meet Me Half Way, which is the best song on the Over the Top soundtrack. Kenny Loggins, man—the soundtrack assassin. They’re suspended thirty feet in the air on one platform. There is a swinging smaller middle platform and then a matching larger one on the other side. Each team has to transfer thirty flags from one side to the other. Cara Maria’s Red Team is considered the underdog because they have Candace, Brianna, Nicole, and Rianna. And they have to go first, which is another disadvantage because you don’t get to see the other team’s strategy. Nicole falls first. Then Rianna. Tony goes down hard into the . This is important, remember it for later. Everyone else gets across, including Candace who busts open her face on the platform. Bloody mouth, fat lip and all, Candace screams “Don’t doubt me bitches” and it’s a top five best moment of the season instantly. It was just like when Lincoln Hawk beats Bull Hurley in armwrestling. She ended up needing ten stitches and she broke her toe. Next up, the blue team goes and immediately Vince falls, Jamie falls, Kellyanne goes down, and finally Larissa, meaning Red Team wins.

Tony doesn’t feel well after the event is over and goes off to the hospital with Candace. The losing team has to vote in one member to The Pit. The winning team also votes in one member of the losing team. It’s a girl’s elimination week. And then this twist hits harder than your fist to the table when your truckstop wrestling Sylvester Stallone and we all see why the Real World has been on for one thousand seasons because these game makers are so good at what they do it’s like having a gaggle of Plutarch Heavensbees. The Blue Team wants to vote in Larissa because they feel like she is a bad competitor and also, if she goes home then Camila leaves from the Red Team. Unfortunately, the Camilanator does not like this idea and goes on a rampage. She tries to talk everyone out of voting for her sister, including her own teammates who having nothing to do with the vote. The best part is when Camila says “I’m never this emotional,” which is the most untrue thing ever said on tv this week and they aired a Republican debate the night before. Camila is a boss but she has also threatened to actually kill Johnny Bananas and has thrown several pieces of furniture threw several other pieces of furniture. Camila’s fire is what makes her a great competitor and an awesome addition to these shows but to say she never gets emotional on a Challenge would be like TJ saying he doesn’t smugly love to watch the competitors get tortured. It would be like Robert Loggia saying he doesn’t hate the father of his daughter’s kid, Lincoln Hawk, in Over the Top. They do and we love them for it.

Next up, The Red Team considers voting in Nany, which sets off Nicole. It’s a perfect dynamic because whoever you want to vote in from the other team, their bloodline is on your team so there will always be inherent drama because nobody wants to go into The Pit. The Red Team ends up voting in Jenna because if she loses, no big deal for Brianna to go home back to the bakery where she has a job because her dad owns the bakery.

The elimination is set: Larissa vs. Jenna. Tony comes back from the hospital, he’s been cleared—no internal bleeding, etc. But as the days go on, he’s not feeling so hot. His skin color is super pale, paler than even cousin Mitch who is Chase Budinger, the palest NBA player of all-time. The Producers try to get Tony to go to the hospital but he doesn’t have to by “declining medical attention.” How is this a thing now?!? It used to be that you couldn’t fight anyone and definitely couldn’t compete if you were as pale as those monsters Will Smith is terrorizing in I Am Legend. Now you get fight warnings and can decline medical attention. Truly, we are in the golden age of reality television, where the stakes are legitimately high. Tony ends up falling down walking to The Pit and the footage of him does not show him moving in any way. They call an ambulance and race him to the hospital. “To Be Continued…” says the tv. Okay, so I’m pretty sure Tony is doing alright now because Twitter. And obviously if anything was truly wrong I would want him to go home. But Tony cannot go home yet! It just isn’t time. He still has so much to give this season. There’s still so many women that are his type (all women) for him to be into. It’s too soon.

Speaking of sneaking off into the night, Cara Maria and Thomas got caught by the camera planning to meet in the bathroom. This seems to be the biggest open secret of the season. Stupid move. They’ve already teased that Abe shows up at some point. I just can’t wait. I’m telling you, who even needs an elimination? I am here for this. 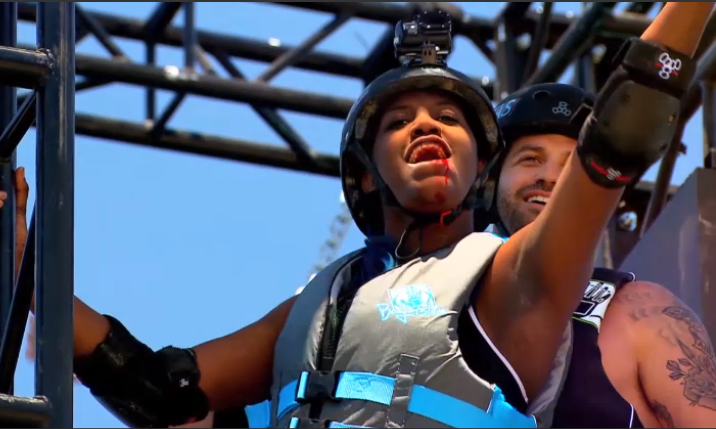