I don’t know what today is. You might be trying to say that it is Christmas but you would be wrong. I celebrated that last night when the MTV Challenge gave me the greatest gift of all. It was like Banana Claus got on his Tony Rainesdeer and delivered a perfect evening of television. Today? Today is just another day of tank top weather in the month of December in the year of El Nino.

Before jumping into the ep I need to lead with the most important news. It wasn’t exactly a secret but the Aftershow revealed that Tony is in fact about to have a baby with Madison. Bubbles is pregnant. This is my Blue Ivy, this is my North Saint West. It didn’t sound like Tony and Madison were on the best terms from the interview so my hope is it all works out in the end. I am wishing the best for them, even if it means we possibly lose out on more seasons of The Most Entertaining Person on Reality Television. How can I even go on after this news? I want to write a thousand words on how excited I am for this kid. Like I was excited for Brian and Jenny’s kid from Real World Explosion. Brian is in my top 5 fave Real World houseguests all-time. But this is even better. As much as I want Tony and Madison and their baby to be okay and lead happy, normal lives, I selfishly would watch a spin-off baby-centric show. Like in a second. Especially if they were neighbors with Brian and Jenny and they all raised their kids together. I just created next season’s Real World twist, you don’t even have to send me a check Bunim-Murray, just invite me to the afterparty.

So back to the Challenge because there is so much to cover. Last week, Tony got taken away in an ambulance after collapsing on his way to The Pit. Turns out he was bleeding internally from a ruptured spleen and had to have emergency surgery in Turkey to have it removed. Unbelievable how everything Tony does is on an epic scale. He can’t even get eliminated in a mundane way. Production wakes Shane up in the middle of the night to say Tony is asking for him at the hospital. And that’s it. They’re done competing. I’d be devastated if it wasn’t for this baby news. Did I mention I was pumped for this baby? How do you find out where reality show contestants are registered? Don’t think I won’t send over a Sophie giraffe teething toy. It’s practically in the mail.

But wait, there is more. Candace gets MAJOR props from TJ on her performance which is basically on par with shaking Frank Sinatra’s hand in an Ocean’s Eleven movie. Obviously I mean the Clooney ones, almost everyone shakes hands with Sinatra in the Sinatra version, which has a much better ending by the way. And then because Candace broke her toe, it’s announced that she can’t compete anymore. So her and Leroy are eliminated. Four people down but you know what, that doesn’t mean we’re not going to have an elimination tonight as well. There was a point like halfway through the episode where I was convinced the winner was going to be crowned week 3 because everyone else would be kicked off before the hour was up.

The Pit was a matchup between Larissa and Jenna. It was called Door Slammer and it involved them literally on each side of a door trying to be the first to slam it shut. Jenna won easily and just like that Camila and her sister were out, too. Not good for Johnny Bananas who lost a big piece of his alliance in Leroy and Camila. Six people gone in one episode. Six. Just over five but not quite seven. And then the Producers throw the loveliest curve. Cara Maria and Thomas have been openly flirting and sneaking into bathrooms all season. Cara Maria has a boyfriend at home. He once got arrested for public urination and while he was in jail, he went to the bathroom in a different way and smeared it all over himself and the cell. Seriously. He is the guy on the Challenge that the guys everyone are afraid are afraid of. And so who comes running in. Abram and his brother and this very lit season just had kerosene poured onto it.

People are getting medically disqualified left and right. Lunatic boyfriends are showing up. What else could possibly get squeezed into this episode?! Well, the Rookies put a big fat target on Johnny Bananas. The Rookie alliance spans the Red and Blue teams. So they’re conspiring together to get Bananas out. And Cory, a rookie, has a little thing with Aneesa, the vet. Then Kellyanne, another vet, has a  romance going with Dario. Aneesa hears Cory talking about how he’s not there for girls, he’s trying to get paid. So she confronts him about the disrespect and they call it off. Looks like Aneesa is gunning for him now. It’s a guy’s elimination week even though they’ve basically decided to not show eliminations anymore, which I am fine with. Again, this ep is a To Be Continued leading up to next week.

To top off what amounts to a perfect episode, is that the challenge this week is Trivia, which is TJ’s absolute favorite game to play. Each team breaks into pairs, one answering questions, the other suspended over the in an inner-tube. If their partner got two questions wrong, they got dropped. TJ must have some awesome off-camera rivalry with Nany because in the bug comp last week he was heckling her and then this week he cackled like that part in Austin Powers when all the bad guys just keep laughing about their evil plan and don’t stop for like five rounds of it when Nany got dropped into the . The best part though was when Rianna got dumped in the drink and TJ pulled out a previously unseen megaphone to scream at her in the about how ungraceful her fall was. The man has a megaphone. To taunt. At the ready. Like he went to production and was like I need this for the challenge today. It is not a request. I will have my bullhorn. Johnny Bananas didn’t know that Beyonce’s sister is Solange and Cousin Vince spelled “column” as “COLLUM” so there were some great missed questions. Hopefully mtv.com will put out a video of TJ bull-horning everyone’s bad answers for like 20 minutes. The Red Team won because Nicole got every question right and was the last person standing. And now I am ready to go into a coma for a week because all of that was too exciting to handle. Have fun today, I’ll be recovering from getting my faceChallenge’d off last night. 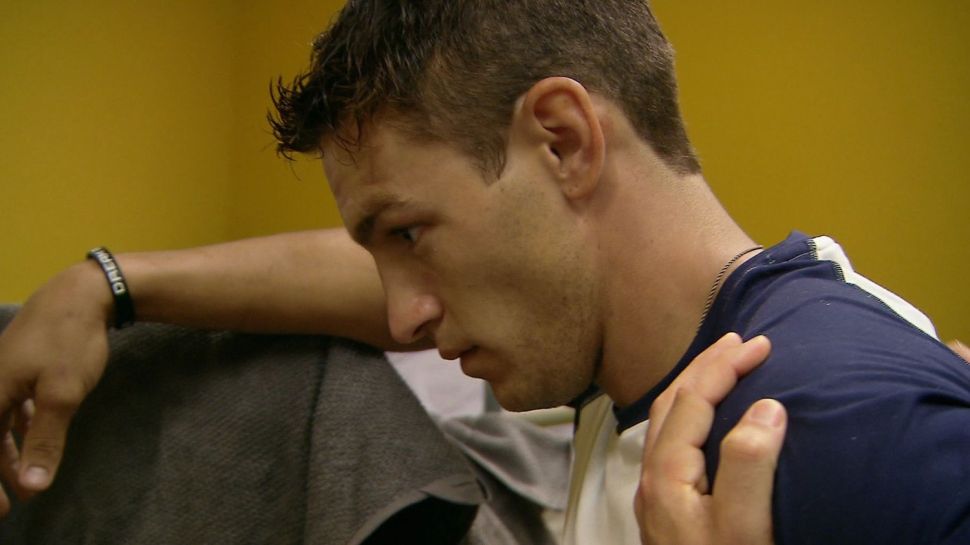