To pick up where last week’s “To Be Continued” left off, the Red Team won thanks to Nicole being super good at trivia and contouring. Nicole is really climbing up the most fave rankings quickly. So two guys from the Blue Team have to go into The Pit. This season really picked up when they split up the Bloodlines into two teams because there is a rookie vs vet alliance that spans the Red/Blue sides. So the rookies and vets are working against each other despite being on the same teams. I don’t know if they know for sure that the Final is going to go back to pairs but I can’t think of anything else that makes sense. If you actually thought you were going to have to compete as a team, you’d want the most skilled players regardless of whether they are rookies or vets. Whether it’s out of strategy or stupidity, it certainly makes things fun. There hasn’t been this much inter-team sabotage since Wes was throwing comps for the Champions team on The Ruins because Kenny and Johanna hooked up on The Island.

The rookies want to get Mike into The Pit because he just joined the show, and that way they can try to maintain the Cory, Mitch, Raphy, Dario, Stephen, Thomas rookie alliance. It all comes down to Aneesa as the swing vote. She had a thing with Cory but they got into a fight last week and haven’t been talking. Cory tries to play off the feelings that Aneesa has for him to get her to vote their way but she is a vet and she goes with the Bananas crew to vote in Raphy. Then the Red Team puts in Mitch. Raphy and Dario get into it with Nany and Johnny after the votes are cast. Johnny calls Raphy “Bart Simpson” for some reason and either Raphy or Dario tears off his mic and says “they’ll pay for this” in Spanish. TJ sees all this going down and lays in the cut watching with his arms crossed and a huge smile on his face. But the clincher is Abe, who grits his teeth and says in his interview “Hit each other. Everyone get out of the way and hit each other.”

Abe being back is so huge. He knows that people are terrified of him. He copped to it. He knows people are scared because he’s gone out of his way to make them be scared. His flashback reel of lunatic flipout clips rivals CT’s. The reason Abe freaks people out is because aside from his psycho side, he’s super smart and has this hyper-logical part of his personality. Like on The Island he got stung by like a thousand wasps and barely cared. But then he ended up asking everyone to vote him off because one of his businesses was having shipping problems or something. Both of these episodes are building towards the revelation that Cara Maria, Abe’s girlfriend, has been messing around with Thomas. It is going to be exquisite. Abe also is great because he hates Johnny Bananas. He dislikes him so much, he won’t even call him “Johnny Bananas.” He refers to him as “John” like I won’t even play your little nickname game.

Aside from the Raphy/Dario vs John/Nany beef, Aneesa and KellyAnne get into it out at the bar. Aneesa throws a drink in KellyAnne’s face. Then they start arguing about who looks older. KellyAnne makes a comment about Aneesa’s “black skin.” It sucks that it got to that point, even though later on KellyAnne attempts to explain that she meant it as a compliment, causing Aneesa’s jaw to drop. Aneesa told KellyAnne she needs to be more careful with what she says, however she meant it. Mitch tried to console KellyAnne saying she’s still the fan-favorite. I don’t know if she was ever a fan-favorite but I do know if you’re drunk, crying on the floor about how you’re not a racist, you def have just said something racist.

In the elimination, Raphy and Mitch have to play tug of war with some Junkyard Dog chains. Mitch’s strategy is to hold firm while Raphy tires himself out. But as Mitch is putting this into action, he slips off the platform and goes down. Raphy starts to reel him in and almost has him but right as he’s about to get the tape over the line, Mitch gets up and Dario, thinking they’ve already won, chest bumps Raphy while he’s pulling. This knocks him off-balance and allows Mitch to pull the other way and win. It is the chest bump heard around the world. I don’t know if this counts as a choke or outside interference but it’s one of the craziest turnarounds since Total Eclipse of the Heart dropped. It would be like if Bill Buckner blew the game because right as he was about to catch the ball, his brother, Will Buckner, ran onto the field to celebrate the victory early and accidentally kicked the ball through his brother’s legs. Raphy and Dario are eliminated and as they’re leaving, Johnny calls out: “You are not the ones!” Typs John move.

The next episode reveals the depth of Abe’s hatred of John. He doesn’t trust him and he’s never liked him. But they’re on the same team so they need to work together. The challenge is to transfer balls across a beach using only flat panels attached to construction worker helmets. Again, the Red Team smokes the Blue Team. Since KellyAnne realizes that she’s probably going to get voted in, she volunteers. Then the Red Team has to pick someone. Abe, knowing that he can’t get John out directly, goes for his ally, Nany. And everyone comes onboard. Including John. The whole house is shocked when John says Nany’s name. But the real kicker is that they have some hidden-camera of John admitting that his vote goes beyond the game. Last season was Battle of the Exes 2, and it was revealed that at some point in life and off-camera, John and Nany hooked up. Even though it was never part of any show and John has had a serious girlfriend for the last thirty seasons. So whatever, they have a past. But John says if his girlfriend saw this episode and John was the only one who didn’t vote for Nany, then he’d be in big trouble. They almost never, 99.9% of the time ever mention real-life, off-the-show stuff on here so this was big. John didn’t want Nany to go home, he just realized that she was going in no matter what so he’d vote for her to save face. John didn’t see how Nany could be upset about this which is the craziest part of all. Nany has gotten mad at people for talking too close to her. How could he possibly think betraying her wouldn’t be a big deal. Usually Nany goes from “zero” to “cut a b—“ so it’s surprising that she didn’t even yell at John, she just seemed hurt. Nicole told John to “eat a bag of dicks,” when he tried to explain himself. To be a smartass about it, Nicole also voted her cousin in. But that was more to throw it in her team’s face. But wow, what a move. I’m telling you Nicole is climbing the list fast. She scares me because she will fight with anyone and also her color contacts are terrifying like when Johnny Depp played Whitey Bulger or Joseph Gordon Levitt walked between the Twin Towers. And when they show Nicole without her contacts she has really nice brown eyes. Maybe it’s part of her intimidation strategy. If so, it is working on me.

Nany vs. KellyAnne in the elimination. They have to run back and forth to swing a mattress into a bell fifty times. KellyAnne is coughing like she has tuberculosis and it doesn’t look good for her but she manages to pull it off. Nany and my new-fave Nicole have to go home. I am more upset about this than when I found out Next Friday didn’t have Chris Tucker in it.

We’re now halfway through the season but it’s only going to get better. The scenes from future shows finally show what EVERYONE has been waiting for. CT saying he’s ready to cause havoc. Also, Zach shows up and he is BALD instead of having his long flowing Thor hair. They’re both wearing gray shirts so I’m assuming it’s for a special competition and they’re not joining the cast. But who knows! Anything is possible, it’s about to be a new year. Let’s do this. 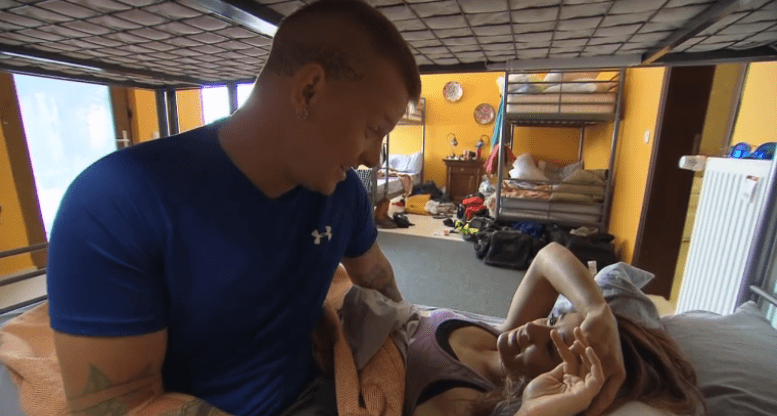