It’s not hard to figure out why the SyFy channel is pushing to make The Expanse its flagship series given success and lasting legacy of Ronald Moore’s Battlestar Galactica and his work on Star Trek: Deep Space Nine. While these shows had the advantage of following established brands, their staying power is owed to Moore’s use of relatable and sometimes controversial themes explored in each episode.

The Expanse effectively utilizes this formula to bridge the show’s distant setting with the viewer’s everyday life. Battlestar explored touchy subjects like abortion and genocide while Star Trek tackled xenophobia, racism and war crimes. In the second episode of The Expanse, “The Big Empty”, and air shortages set the stage for conflict between the intersecting storylines.

On Ceres station in the asteroid belt “where air and are more precious than gold”, Detective Miller is seen mid-shower when an alert indicates the exhaustion of his ration and shuts off his tap. Aggravated, Miller continues on and begins his investigation into the disappearance of Juliette Mao who was last seen on the station. Miller finds and makes his way into Mao’s apartment to scan previous video messages and is given clues in a way familiar to Lost fans; via the creepy man from those Dharma Initiative videos.

Dr. Pierre Chang as he was known on Lost, returns to sci-fi television as the wealthy father of Miller’s missing girl and is introduced in the very same way -on a small video monitor. The messages between father and daughter point to a combative, estranged relationship. Detective Miller takes note of this but seems more interested in completing his shower under the tap of Juliette Mao’s sink.

While Miller’s struggle with mandatory rationing is mainly hygiene-related, the situation for the asteroid belt-born Belters is far more desperate. There is a clear disparity between the poor “rock thrower” class of Ceres station and the corporate administrators or politicians that oversee labor from their pristine office spaces and luxury living quarters. The laborers and even the “badges” like Detective Miller, live in dilapidated housing complexes that are under constant surveillance by drones.

While leaving his apartment, Miller crosses paths with a Belter who claims that Earth and Mars are holding back shipments. While it’s still unclear how the bartering between the solar system’s powers work, we can assume that is part of the exchange for the precious resources mined from the asteroid belt. The Belter warns Detective Miller that the first missing shipment will lead to protests and a second could lead to widespread death.

The desperation is highlighted further as an administrator asks Miller to find the individual stealing from the upper-class lawn-watering system and is told that it must be a Belter because Ceres station’s “criminals tend to be Belters.” Detective Miller finds the culprit to be a young man but lets him go with a warning -a sign that Miller is starting to at least acknowledge the suffering of the station’s less fortunate.

On Earth, the story continues to follow United Nations Undersecretary Avasarala who is described by her male counterpart, Sadavir Errinwright, as “two heartbeats away from running the government on this planet and yet, accountable to noone”. The character, who also has the title of Undersecretary, is played by the actor recognizable from his stint as Kate’s lawyer on Lost. Avasarala is warned by Errinwright that the torture of a Belter she has in custody using Earth’s gravity as method of inducing pain has been “publicly disavowed” by their boss, The United Nation’s Secretary General.

Avasarala’s claims that her prisoner is a smuggler for the Outer Planet Alliance or OPA – an organization she describes as seeking legitimacy through violence. The Undersecretary suspects this Belter of carrying restricted stealth technology and uses her concern to lobby for a surveillance of Mars’ military bases. This suspicion may point to a conspiracy between the OPA and the Mars Congressional Republic.

Avasarala’s heeds the advice of her law-abiding colleague and moves the prisoner to a suitable, low-gravity liquid tank where they exchange cryptic allegations during interrogation. The prisoner acknowledges that he’s heard tales of his torturer indicating that Avasarala may have a nefarious history. Her investigation comes to a halt as the Belter prisoner commits suicide while being transported to another prison.

Further exchanges by both UN Undersecretaries point to a cash-strapped ruling government who would rather remain static in the “cold war” between Earth and Mars. The standstill creates “Mutual distrust and complete co-dependence” explains Errinwright. “Nobody wants to change that”.

It seems that change will happen regardless given the situation looming over the crew of the stranded shuttle, The Knight. These characters have just witnessed the destruction of The Canterbury mining ship via a nuclear-armed missile launched by a Mars military vessel in the previous episode. This particular storyline is currently the least interesting thing about the show due to the familiarity of the beaten-to-death device of a struggling, rag-tag group of hot-headed shipmates. It’s safe to assume that loyal SyFy viewers have seen this arrangement a handful of times on the network’s many space-set shows like Stargate and Battlestar Galactica.

The highest ranking officer of The Knight, Jim Holden, has his leadership immediately challenged by the crew as debris from their destroyed mothership damages the shuttle. Visibly upset from the death of The Canterbury’s navigator whom he had ongoing sexual relations with, Holden rushes to ensure the survival of his crew by taking extreme risks. The Knight is without two things at this point; a sustainable air supply and radio contact.

While these issues are commonplace in this genre and have been explored time and time again in every incarnation of Star Trek, the showrunners of The Expanse are using the lack of basic necessities like air, , and communications to ground the story. Continuing to explore the theme of resources we take for granted here on Earth and how precious they become the further we venture into the solar system, can be a useful tool for relating the show’s characters to the audience.

The episode concludes with the crew of The Knight successfully restoring communications and seemingly enabling rescue before their air supply is exhausted. Their worry became celebration as a signal is received to indicate rescue but that prospect quickly turns to dread as the ship is revealed to be a Mars flagship naval vessel. Still in a state of despair, Holden sees nothing but destruction by their supposed rescuers and sends a video message into the void of space that explains the red planet’s hand in the destruction of The Canterbury and the murder of its 50 crew members. 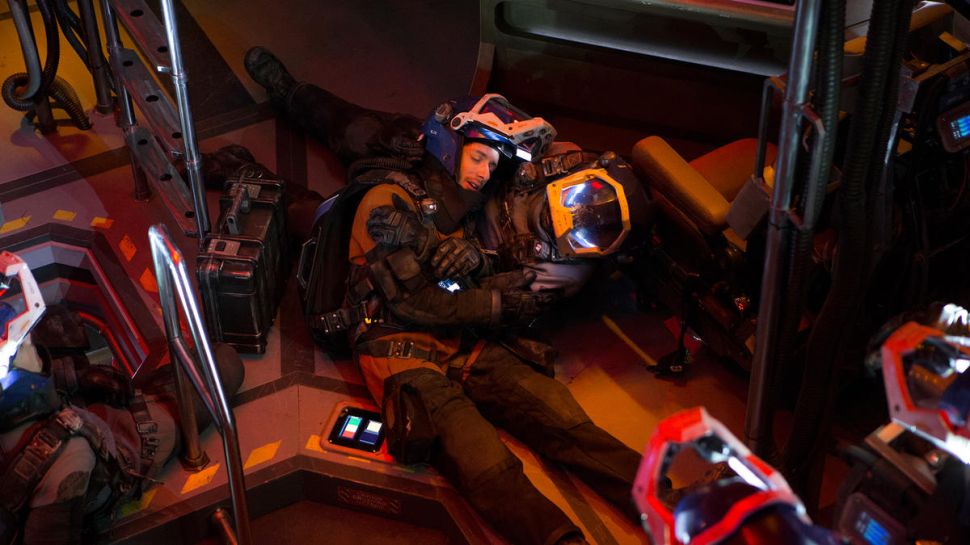