In the distant future of The Expanse, The Church of Jesus Christ of Latter-Day Saints has commissioned the construction of the Nauvoo – a giant spaceship that will carry their “best and brightest” Mormons to a new planet with a new sun. This rich slice of universe-building accompanied the introduction of Fred Johnson, Director of Operations at Tycho Station and the man overseeing the construction of the Nauvoo.

In the winter of 1839, Mormon settlers purchased a small city in western Illinois called Commerce and the founder of the Latter-Day saint movement, Joseph Smith, renamed it Nauvoo. The embattled church was escaping persecution, violence and legal trouble from the Illinois state government as well as factions from Missouri and Utah. It’s safe to say this persecution has been reignited in humanity’s space-faring future and may point to a disdain for religion in the story’s universe.

In The Expanse, the story of what happens to the Mormon church (and other organized religions) will be trickled out with other back-story elements to fill the 200-year gap between the show’s setting and the present- which the showrunners seem desperate to bridge with (They have flying drones and video messaging!). The brief scene between Fred Johnson and a Mormon administrator weighs heavy on the show’s plot but is slipped in between the three main storylines of the  Earth-based United Nations, Detective Miller’s case on Ceres Station and the rag-tag crew currently ship-hopping around the asteroid belt.

Fred Johnson, played by The Wire and Walking Dead alum Chad Coleman, makes the best of the few lines he is given while fitting together some of the show’s puzzle pieces. The Mormon administrator explains to Johnson that he must be replaced because the church’s elders are concerned about his alleged ties to the Outer Planets Alliance(OPA) -a group the solar system’s powers believe to be violent terrorists.

Johnson does not refute the accusation but instead explains that the OPA is a human rights organization that also ensures fair labor practices for Belters. As he continues on, Johnson’s tone changes to a sinister one as he instills fear into the Mormon administrator, explaining that his departure from the construction of the Nauvoo may have dire consequences for those who will make the hundred-year journey to a new world.

Johnson would pull the most skilled engineers from the workforce, leaving the Mormons with a lesser-skilled workforce to build the interstellar-bound spaceship. Fearing the unlimited problems they could experience on the journey, the Mormon administrator concedes to Johnson and politely asks him to continue overseeing the work.

The construction of the Nauvoo is unusually being overseen by Tycho station -the largest construction platform in the solar system and a facility Johnson explains as being previously used exclusively for ice processing.

In the last few moments of the scene, two important pieces of information are rushed out. Fred Johnson hastily asks the Mormons to evacuate their personnel from the Nauvoo so his team may complete routine work. What does this mean? If Johnson is in fact OPA, he may have used the Mormons to finance the building of this new spaceship. After dropping off the Mormon administrator at Tycho station via a gondola between there and the Nauvoo, Johnson calls for an update on the situation currently crippling the Donnager – indicating he may be pulling the strings.

The Mars Naval vessel is attacked by what we can now assume are OPA ships equipped with advanced warfare technology. Jim Holden and his crew are still prisoners of the Donnager but are evacuated during a devastating attack so they may convince the rest of the solar system that Mars was not responsible for destroying the Canterbury and that a newly- militarized group is trying to start a war. Holden and what’s left of his crew (the medic is killed pretty gruesomely) escape with the help of the Mars navy before they destroy their own ship along with the probably-OPA soldiers.

Who is Fred Johnson? Probably the leader of the Outer Planets Alliance. He certainly sounds like a leader or politician when defending the organization and describing it like an NGO (Hamas leaders have done the same during Israeli-Palestinian conflict). It’s been established in previous episodes that the OPA’s core group of members are made up of hard-laborers marginalized in the asteroid belt and Johnson clearly has some kind of unionized control over the best of them.

The introduction of Fred Johnson and the Mormon vessel brings the story into focus and finally fires the engines on the overall plot driving the story of the intersecting characters. Jim Holden’s crew (as he notices in this episode) was attacked in the pilot episode by the OPA and their new ships. United Nations Undersecretary Avasarala was wrong to blame Mars for conspiring against Earth and it seems that the OPA may be acting independently against all other parties. It’s still unclear how Detective Miller’s missing girl case ties directly into this conflict but we do know she is a member of the OPA. If The Expanse continues to build a rich universe rather than focusing on long, poorly-executed battle scenes we’ve seen time and time again on the SyFy channel, I’ll continue to tune in.

Ironically, the show’s predecessor Battlestar Galactica, was praised for its thrilling battle scenes and grounded action while the religion and spiritual aspects of the story fell short. In The Expanse, learning how religion and scripture evolves along with the exploration of space is far more interesting than anything else currently happening on the show. 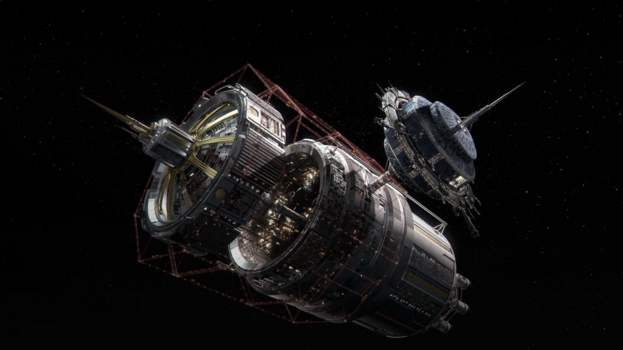