Old habits die hard. At least, that’s what we can gather from the Captain August Robertson and John Thackery origin story. If things had gone to plan, Robertson would have met his end six years prior in Nicaragua after infecting the locals with smallpox infected blankets he used to barter a trade route. The business model for Robertson’s shipping company has always seemed to inadvertently involved spreading plague in one form or another. In this case, Robertson is saved by John Thackery, a fresh-faced Philadelphia doctor who manages to successfully barter for the shipping magnate’s life while MacGyvering a smallpox cure from the local flora.

Six years later, Robertson is on the cusp of being done in again by his own careless business practices. In this case, his own daughter, Cornelia, is prepared to blow the whistle on him. And Thack, well, he’s looking far more craggy and used up than he did in that flattering Central American sunlight. And he’s not just looking rough on the outside. He’s suffering from an extreme case of gut rot after ingesting enough cocaine to have fueled several Motley Crue tours. Despite collapsing in front of Bertie and Algie, Thack refuses exploratory surgery. Instead, he opts to have Zinberg over at Mt. Sinai use an innovative procedure to look inside Thack while he’s awake. Sure, Bertie and Algie are amazed at the new technology with which Zinberg can peek into Thack’s necrotic intestines, but they are also morbidly fascinated with the complete dumpster fire that is Thack’s insides. The past few years of hard living have really caught up with the good doctor. Despite the urgency of his situation, Thack refuses Zinberg’s recommended immediate surgery. Instead, he has other ideas. Let’s just hope he knows what he’s doing. Sure, Thack is brilliant and he separated those conjoined twins and all, but he doesn’t exactly have a perfect batting average when it comes to implementing treatment. Just ask his ex-girlfriend Abigail and a few of his addiction study volunteers. Oh wait, you can’t.

If there’s ever an award for a show’s most dynamic character, the statuette has to go to Nurse Lucy Elkins. God, has she evolved from the naive, co-dependent nurse. Now she’s shrewdly bargaining and manipulating her way into society via her relationship with Henry Robertson. If there was ever an indication that her relationship with men has done a complete 180, it would have to be the speech rubbing her abusive preacher father’s face in her decadent sex life before sending his paralyzed ass to the afterlife with a mystery injection. Damn, girl.

Speaking of women not taking any shit from men, Effie Barrow managed to position herself as a far more menacing threat than Ping Wu and Bunky Collier combined. Amid her soon to be ex-husband’s aggressive cruelty in banishing her and their children to a small apartment, while he lives on the edge of Central Park with his newly liberated former sex worker, Effie just so happened to have discovered the original work orders for the new Knick construction after a banker mistakenly handed her the key to her husband’s safe deposit box. Knowing what a scumbag her husband is, Effie rightly assumes that he’s been skimming money off of the construction and demands half of his salary along with a sweet Upper East Side townhouse or else she’ll expose him for the crook he is. Barrow was basically born to be owned by someone else, and each season his jailer changes hands. Sure, Effie may not be a gangster or underworld boss like his former handlers, but she’s no less formidable.

Given the fact that Barrow can’t get Henry Robinson to draw out construction so that he can further skim money and oay off his ex-wife, it would make sense if he set the fire that ultimately brought the new Knick down and killed Daddy Robertson in the process. However, given the sincerity with which Robertson denied Cornelia’s accusation that he ushered plague into the country by issuing second class tickets to sick patients, it’s also possible that Henry set the building ablaze. After all, Henry was supposed to join Cornelia in confronting their father about his shady and illegal business practices, only to be mysteriously late to the meeting. How convenient that he seemed to show up after the building was well engulfed in flames.

Gallinger is still garbage. However, he’s garbage that just learned that his now committed wife wasn’t the only person poisoning Dr. Cotton, she just sped the process along. According to the cop who dropped by The Knick, Dr. Cotton used the same invasive tooth removal procedure on his sons, and they retaliated by gradually poisoning him. Hey, at least Eleanor is off the hook and she can live out her days in the humane sanitarium rather than a prison cell while her husband has celebratory sex with her sister on the floor of their house. Plus, any sympathy for Gallinger accrued in the cop scene was instantly pissed away when he sucker punched Algie after getting off the hook for the involuntary sterilization of a house full of unwitting Jewish youths. It looks like Gallinger will have a bright future after all considering one of the doctors on his review board sees a bit of a kindred spirit in the Hitler Youth poster boy. Poor Algie just cannot win, even when he should, which is all the damn time.

Tom Cleary’s condom pitch is something to behold. He and Harriet are on the way to a profitable partnership, even if it isn’t the romantic partnership Tom Would like. Still, something in the ex-nun’s face telegraphs that she is wrestling with a desire strictly forbidden by her former, more pious life.

The episode ends with Daddy Robertson getting sprung from his shackles and walking off in lush countryside with Thack. Robertson reveals that he’s on the board of a hospital in New York, which Thack realizes employs a doctor he greatly admires, but has never met. Of course, the doc in question is Christiansen, Thack’s mentor who ended up killing himself early in the first season after losing a pregnant patient. Still, the golden sunlight gives the scene a “start of a beautiful friendship” feel, yet Cliff Martinez’s droning soundtrack foreshadows the ensuing dread. 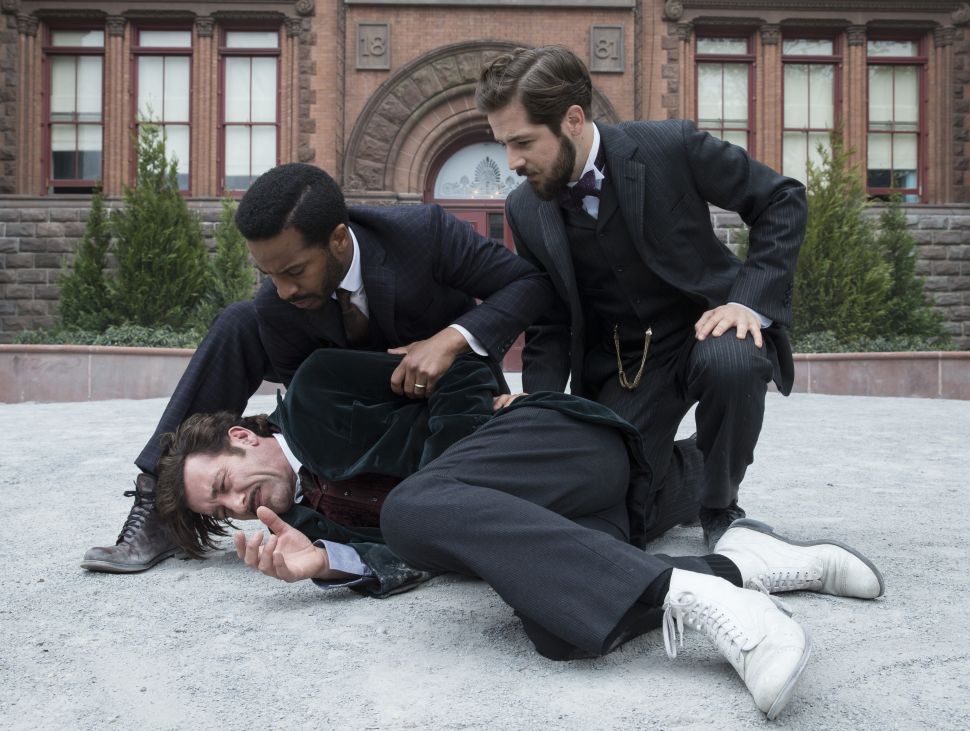