The Magicians, SyFy’s new fantasy drama series, has been touted widely as grown-up Harry Potter. The similarities, of course, are obvious from a rote description of the plot: a disaffected young boy with an English-sounding name discovers that magic is real when he’s selected to attend a magical boarding school. But we learn from the first scene that Quentin Coldwater (portrayed by Jason Ralph) is no boy wizard; instead, he’s a J. Crew-model-handsome college senior who we know is depressed because we see him at a party sitting down and looking sad while drinking from a red cup and ignoring a seductively dancing woman in tiny shorts.

The decision to make Quentin and Co. college seniors and Brakebills—the magical would-be Hogwarts—a graduate school is the first of many sizable changes SyFy has made to Lev Grossman’s bestselling trilogy on which the series is based. It’s an understandable one, at the very least, in terms of appearance. Every student we meet has the same glossy sheen of generic attractiveness as 25-year old extras in an episode of Gossip Girl, and bypassing the temptation to pass them off as 18-year-olds makes the already gratuitous sexuality a little less eye-roll inducing. Penny, who in the books had been described as an overweight, round-faced outcast with a mohawk, has been replaced with a slithery brown-skinned sex god. We are told that Alice is the smartest in the class by far, and this is conveyed by putting a gorgeous blonde woman in glasses and short dresses with peter-pan collars. The effect is almost pornographic; we half expect her to ask the professor what she can do for…extra credit.

But the older cast of good looking people speaks to a larger problem with the show so far: a misunderstanding of the point of the novels. Grossman’s books, especially the first one, are oddly paced, with four years passing before Quentin is even faced with the story’s central conflict. Attempting to condense the exposition and internal dialogue of the character over an incredibly long period of time into an interesting and tight pilot is an ambitious endeavor, but the beats that the show chose to highlight made it seem as though, in lieu of reading the book, the screenwriter had just read a summary of the The Magicians‘ first 200 pages by a lackluster intern.

The entire first episode might have focused on Quentin’s feelings of dissolution with the real world, and the way he retreats into the Narnia-analog books as a way of preserving a sense of childhood purpose, climaxing with his entrance to the school, Brakebills, and learning that the thing he thought had been missing in his life had been there all along, hidden behind elevator doors and down forgotten alleys. But the television show, anxious and impatient, rushes through the bullet points of the book’s plot and forgoes the emotional complexity that made the books more unique than just the Potter imitation they seem at first blush.

Book Quentin is legitimately depressed, and Grossman’s portrayal of the character’s mental illness touches upon something very real: the inability to find meaning in daily life. The trope of discovering he was special all along is later subverted by the realization that unlike Harry Potter, the chosen one, Quentin is not actually chosen. He is an ordinary student of magic, a subject we learn through long paragraphs of description is basically just very advanced organic chemistry with ancient languages thrown in, a subject so boring and complicated it makes you wonder if magic is really worth all of the effort at all. Quentin spends chapters feeling inadequate and studying using academic rote memorization and practice, which makes his contrast to self-taught Julia who becomes magical in the sleazy underground so distinct and interesting.

Quentin is equally unlikeable in the books as he was on the TV show, but whereas Book Quentin was prickly and insecure, pining away for a girl dating his best friend, TV show Quentin is a sullen and obnoxious Colin Jost-type who ignores the plethora of the most beautiful women a casting agent could find in Los Angeles because none of them understand the children’s books he likes as deeply as he does. When he’s confronted by Julia about magic (a scene which takes place two or so years after he’s been studying at Brakebills in the books, and approximately 5 minutes after getting there in the show), he’s so condescending to her attempts at spellwork, you just want to shout at the screen that he hasn’t learned a single spell yet!

I was disheartened by the immediate and oblivious way the show stripped Julia of all of the interesting female agency she had in the book. This flirtatious Shay Mitchell-body double with long hair extensions flounces into bed with milquetoast Quentin, doing her darndest to manic-pixie him out of his ennui. When we find out later that she has a boyfriend, it’s just more confusing than anything. The larger problem with Julia is that she only comes into her powers when under threat of sexual violence. Side note: the would-be rapist is so equally generically handsome as the rest of the cast that I thought it was Julia’s Brooks Brothers boyfriend who had already been in a few scenes.

The rushed world-building continues when Elliot and Margo (another Shay Mitchell stand-in, her name arbitrarily changed from the book’s “Janet”) immediately become best friends with Quentin for no explanation and point out the different cliques of magicians as they walk past them on the campus like they’re in a fantasy-themed parody of the cafeteria table scene in Mean Girls.

The show also made the bewildering choice to make the Chatwins already older teens when they entire the magical Fillory through the grandfather clock in the attic which altogether eliminates the fixation on youthful innocence on turns out to have so much metaphorical resonance. In fact, Fillory’s importance as tied to Quentin’s “destiny” (and their insistence on making him Special at all) is so heavily foreshadowed in sloppy dream sequences that it ceases to be a metaphor altogether.

Of course all of my nitpicking can be attributed to the usual fan anger at any adaptation. And, though I was initially skeptical to the series, I became a fan as I continued reading, finding pleasure in the angry quirks and self-awareness of the story and rabidly defending it against those who misread it with complete earnestness. That’s where I felt disappointed by the premiere – not because it strayed from the plot in any significant way or because the visuals or score weren’t wonderful, but because it failed to live up to the promise of the book’s premise: a truly ordinary boy making a lot of the terrible, self-centered mistakes most college kids do, in a world in which magic happens to exist. But, after all, Grossman’s series reached its peak in the trilogy’s final book. Maybe as the show finds its pace, and continues, it’ll get somewhere close. 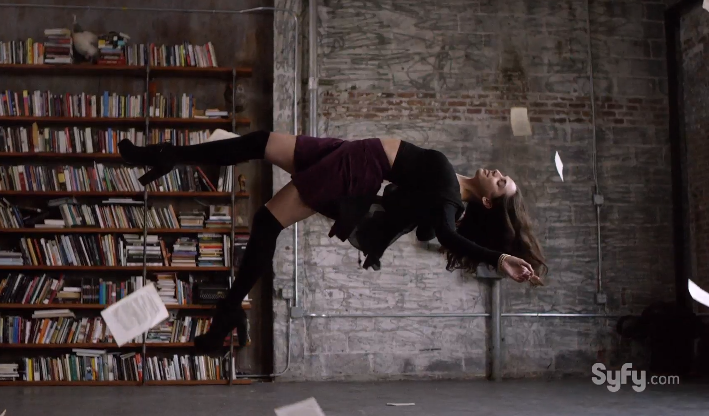