Denim, an indgo-dyed, woven twill cotton fabric known for its durability and utility, has long been a staple in American closets. But in recent decades it has also become a trendy piece on fashion runways. The path from gritty gear to fashion obsession is explored by The Museum at FIT’s curator Emma McClendon in the exhibition Denim: Fashion’s Frontier, which opens today.

The idea for the exhibition began while Ms. McClendon worked on the museum’s spring 2015 exhibition on Yves Saint Laurent and Halston. “You can’t research fashion in the ’70s without coming across a lot [of] denim,” Ms. McClendon said. “It really exploded on all levels of the market during that period. It was the most visible symbol of cultural change.” When Ms. McClendon began her research in the Spring of 2014, the denim industry wasn’t doing well, with ominous reports of dropping sales. But then, “all of a sudden, September 2014 hit and it exploded across all the runways,” Ms. McClendon said. “It was lucky timing because people [now] really want to learn.” Ms. McClendon hopes that viewers will see that, “it’s not just about the five-pocket jean…there was a history before that.”

The exhibition does begin with this familiar part of denim history–the beginning of denim lore–with the story of how Levi Strauss created the first denim five-pocket jeans with copper rivets, suitable for the hard labor of Gold Rush miners. Although the Levi 501s on display are not the ones first invented by Levi Strauss (Ms. McClendon was limited to using pieces only from FIT’s collection) an iPad shows a photo of one from 1890 so that viewers can compare it to the 1953 version on display. The combination of a linear visual history with multimedia elements for both cohesion and interactivity is effective. It tells the story of denim–one of the most ubiquitous garments in the contemporary world–by walking through its history, both literally and figuratively, in a way that both informs and delights.

The exhibition continues chronologically, in a long looping line around the perimeter of the museum’s first floor Fashion & Textile History Gallery, beginning with some examples of early uses of denim in 19th century workwear, long before Levi Strauss and his 5-pocket jeans famously came on the scene. A sailor uniform and a prison uniform display the pervasiveness of denim in the early 1900s, as well as the working class and degenerate associations percolating well before the cinema street thug of the 50s, and the hippie revolution of the 60s.

It then moves on to the 1930s and the beginnings of denim as a fashion textile with Vogue’s first mention, in 1935, of Levi’s being recommended for wear for a fashionable dude ranch vacation. Then World War II came, and with it Claire McCardell’s perfect housewife popover dress and the Rosie Riveter women in denim jumpsuits taking over male hard labor. Then, in the 1950s, Marlon Brando famously wore a pair of tight jeans, giving denim a negative connotation of rebellion and delinquency. But then the counter-cultural hippie movement of the ’60s and its embrace of the demonized denim was what led to denim finally coming into the mainstream by the ’70s.

The exhibition then traces the rise of the European style jeans, Jordache jeans and Brooke Shield’s controversial commercial for Calvin Klein jeans in the 80s; to the sagging jeans of hip hop, acid-wash finishing and hyper sexualized imagery of the ’90s; to the introduction of luxury denim with Tom Ford’s 1999 Gucci collection of feathered and beaded jeans costing well over $3,000 (the jeans, gifted by Gucci, is one of the highlights of the show) which, to the shock of the fashion press, sold out before it arrived in stores and led to the creation of premium jean companies like 7 For All Mankind and Acne in the early aughts. One of the final pieces, a denim dress by Junya Watanabe for the spring 2002 Comme des Garçons runway, is another highlight, showing the versatility of denim to create a distressed and draped couture garment.

The exhibition ends with a selection of denim from the spring 2015 runways–Chloé, Sacai, Dries van Noten, Rachel Comey, Ralph Lauren–a nod to the re-emergence of the 1970s, the decade that brought denim as a fashion item into the mainstream. This attempt by Ms. McClendon to bring the exhibition full-circle, underscores the continued significance of not only the classic “heritage” jeans, but also of the use of denim in many different garments. As Ms. McClendon explains, denim is a fabric, “so many people wear every day. The market for it is colossal.”

Denim: Fashion’s Frontier will be on view from December 1 until May 7, 2016 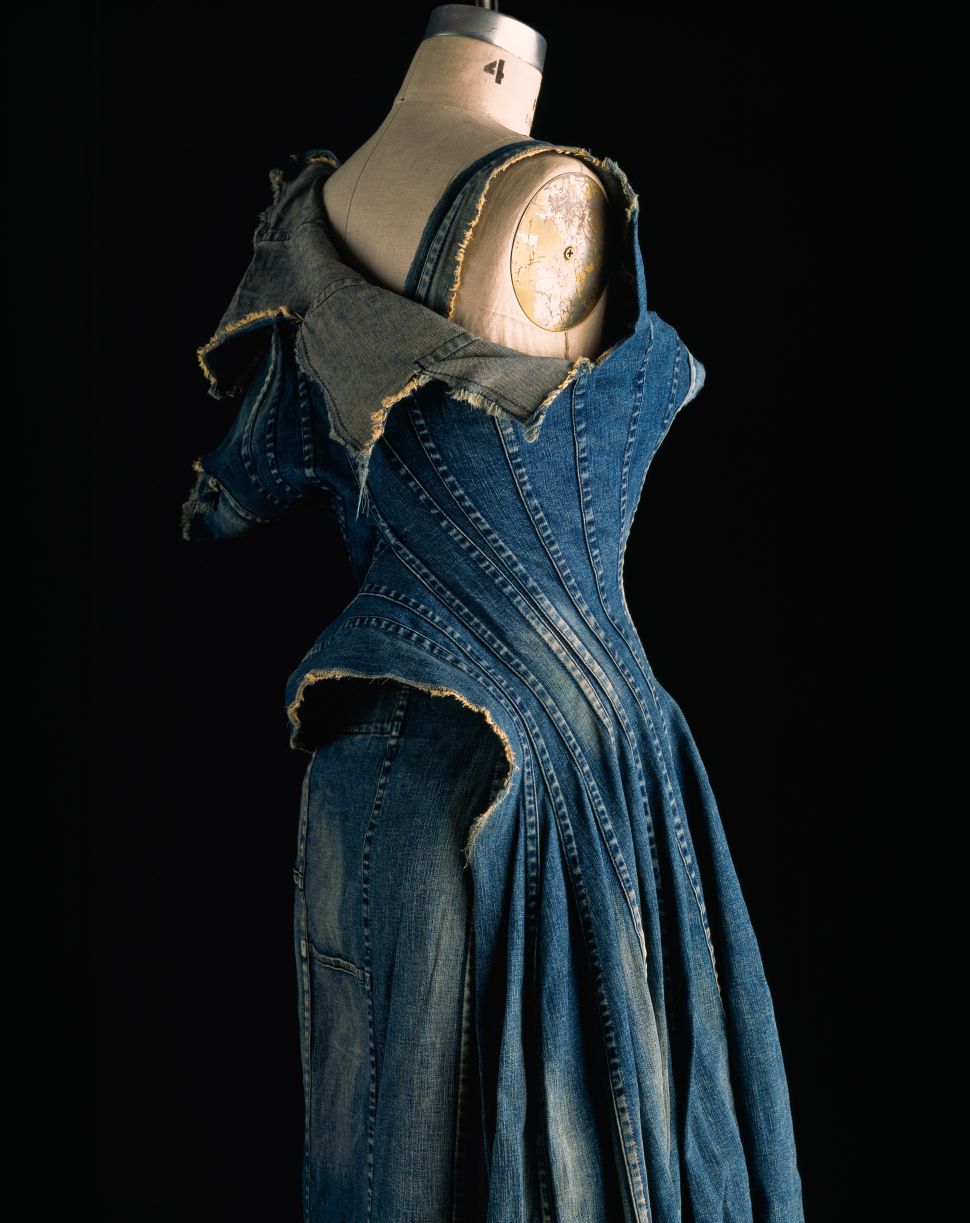