The members of the New Orleans Swamp Donkeys, a traditional jazz band, are by no means stuck in the past, despite that their music suggests they yearn for the 1920s.

You may know them for their swinging instrumental cover of the Game of Thrones theme song, which they performed in June 2014 at B.B. King’s Blues Club & Grill in Times Square. It was an artful appropriation of a tune already in everybody’s head, as well as a smart marketing strategy for a band that tends to work with rarefied material. The video went viral, and a lot more people knew about the Swamp Donkeys as a result.

Now, the band has returned with a jazzy take on the music from Star Wars called “Far, Far Way,” based on the main theme song. You can watch the video below, which shows the band performing its intergalactic music at Bamboula’s, in New Orleans, and throughout the city.

The band, which was featured in a recent Vanity Fair piece by Will Friedwald on the rise of trad jazz, includes Haruka Kikuchi on trombone, Miles Lyons on sousaphone, Josh Marotta on percussion, Connor Stewart on saxophone and James Williams on trumpet. 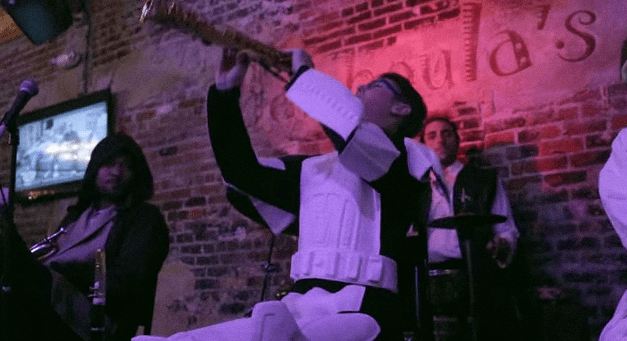