“Can a perfectly healthy twenty-something have a heart attack?” I thought, gasping for breath, as the strobe lights worked their Miami nightclub magic in the almost blackout basement where a DJ brought the beats.

Full disclosure—perfectly healthy might be overkill. I guzzle vodka sodas like they’re going out of style (when in fact, they’re a timeless classic) and would much rather watch a Netflix marathon than run a real one. Despite not being born a jock, after reading rave reviews from model clients in the Observer, I believed that I was ready to take a ((305)) Fitness class in the West Village. After all, I eat kale! I take obscure boutique fitness classes! I say horrible things like “I’m not doing carbs right now,” and “My facialist said I should cut back on dairy.”

Despite my new-found love of kale, my own personal “wellness journey” began in the South, where wellness is a fresh baked biscuit, hold the butter. Or grits without the cheese. It’s certainly not New York City wellness, which mostly consists of talking endlessly about gluten-free options and surviving on green juice and air.

Said journey brought me to a stylish studio that looked more like an art installation, with class-goers wearing “Make Sweat Sexy” tanks while Instagram-ing the decor, which consisted of neon pink flamingos and what seemed to be an artist-in-residency hard at work.

Once inside, a black light illuminated my sneakers, along with the instructor’s neon nail polish and a classmate’s underwear, which was shining brightly through her Lululemon leggings. I couldn’t take my eyes off of the man next to me, clad in a tie-dye tiger tee, with muscles that looked like they were cut out of marble. As he bounced up and down enthusiastically, I was barely breathing. When the instructor, the endlessly energetic Sadie Kurzban, shouted “You can do it, Margaret!” into her microphone, I wondered if I could, or if I would be the first ((305)) casualty.

Ms. Kurzban, the self proclaimed “Jewban” who started the latest lifestyle cult craze, possesses the type of energy that even double shots of espresso can’t seem to give me. As Ms. Kurzban greeted her new students and devoted regulars, she never slowed down. As I bopped in place, hoping no one would notice that I wasn’t truly moving, she ran around the room and high-kicked like a Rockette on Christmas Day.

How can one prepare for a class that makes a night at LIV seem low-key? As a South Florida native and Zumba fan, I assumed I was ready for this workout, which I envisioned as a straight edge Ultra. Instead of dancing to reggaeton while channeling my inner Jennifer Lopez, there were boot camp jumping jacks. In fact, the sheer amount of jumping took me back to middle school P.E., only now I would certainly be picked last for this trendy team. My gray Observer T-shirt gave me away as woefully out of place, along with the fact that my high kicks haven’t reached my nose since my cheerleading days. Even my jazz squares were losing steam.

While I’ve never left a class (not even aerial yoga or hip hop cardio on a particularly painful Sunday morning), I seriously considered it. As I plotted my escape, the friendly Greek god next to me started Vogue-ing far better than Madonna, or even FKA twigs, could even dream. He was later announced as a new instructor, which only made me feel slightly better about my current state.

When Ms. Kurzban asked what everyone would rank their workout, from a 1 (Netflix marathon) to a 10 (actual marathon), my body screamed “hard 30,” while my classmates settled on a solid 7. She announced that we were kicking it up to 12, which seemed like an impossible feat. While the leg toning portion sounded terrifying at the beginning of class, when it arrived it was a welcome relief. As someone who lives in a walk-up, my calves are the only body part that truly receive a daily workout—but despite their strength, they were screaming.

As I left class, the unstoppable Ms. Kurzban, who was teaching again the next morning, told me to come back within the week. She was so motivational that I genuinely considered it, before I was distracted by the smell of fresh pizza across the street. On my way home, as I walked by my classmates drinking their dinner at Liquiteria, I wondered if I should start bringing my inhaler to workouts with me. 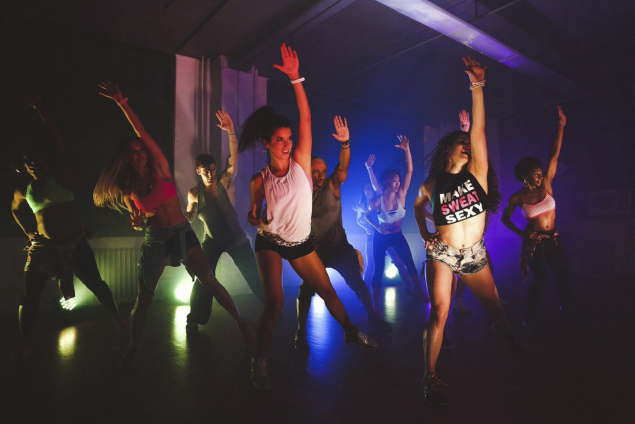