Exactly four decades ago on December 13, Arista Records released Patti Smith’s debut album, Horses. I can’t help noticing that this particular 40th anniversary has been far more remarked upon than that of, say, Yes’ Relayer album last year. Why such unfairness? In its way, Horses is just as pretentious and self-indulgent as Relayer, only it contains fewer chords, no synthesizer solos and melodies that aren’t as good.

The historical importance of Horses is inarguable.

I kid, of course. (Though not about the pretentiousness and self-indulgence, which don’t bother me, or the melodies, which kinda do.) The historical importance of Horses is inarguable, above and beyond any particular aesthetic considerations. It introduced, fully formed, a daring new mystic voice in popular music. It referenced a classic persona, that of the androgynous poet/rocker, and gave it an exciting twist: the poet/rocker in question was a woman. And for listeners outside of New York, it was the first real full-length hint of the artistic ferment taking place in the mid-’70s at the juncture of Bowery and Bleecker.

The word “punk” would later be attached to everything CBGB-related, but Horses is more punk in its attitude than in its sound. It takes a cabaret approach to rock, and by cabaret I mean Brecht/Weill, not the Sweeney Sisters. Richard Sohl’s graceful keyboard work drives the arrangements more than Lenny Kaye’s scratchy guitar, and although the band can work up a good head of steam, it tends to do so in a knowingly theatrical way. This music has a deeper affinity to Van Morrison lapsing into animal noises on “Listen to the Lion” than to the primal power of the Ramones.

While we’re on the subject of animal noises, it must be acknowledged that Horses is not always a pleasant listening experience. Smith didn’t intend it to be. Over the course of its 44 minutes, she bleats like a goat, yelps like a cat whose tail has been stepped on, howls like an abandoned toddler and pounds her chest while she sings to give her voice a guttural gulp. All for what? Like a shaman (a word and a concept she loves), she’s always reaching for the transcendent, trying to slip past the borders of her own self, enter the spirits of others, and meld with the mysterious force that binds us all together. She doesn’t always attain this transcendence, but she knows where she can find it: in rock and roll.

That is the abiding message of “Gloria” and “Land,” the garage-recitative suites that are Horses’ two centerpieces. The message is conveyed more through the music’s overall mood, the swells and surges of the band, and the sound of Smith’s voice—harsh edge, yearning center—than it is through her words (which, truth be told, verge on gibberish at times, especially during “Land”). And that message further confirms that this album could only have been made by people who were young and starstruck in the ’60s.

It’s true, you don’t have to be familiar with “Gloria” as rendered by Them (or any number of others) or “Land of 1,000 Dances” as rendered by Wilson Pickett (ditto) to appreciate what’s going on here. But it sure helps a lot if you are, and if you subscribe to the notion that three chords and the truth are really all that matters. To quote David Bowie, “Till there was rock, you only had God.”

These holy orgiastic moments are necessary to counterbalance the rest of the disc, much of which—“Redondo Beach,” “Birdland,” “Break It Up,” “Elegie”—is fixated on death. One curious irony about Horses is that an album so closely associated with the beginning of something (punk) is itself so concerned with endings. Its celebrated opening line, “Jesus died for somebody’s sins but not mine,” now seems far less significant than its closing ones: “I think it’s sad, it’s much too bad, that our friends can’t be with us today.”

When Smith sang those words, the foremost person in her mind was Jimi Hendrix. Horses was recorded, after all, in the studio he’d built, Electric Lady on 8th Street; Smith had met him there at the studio’s opening party, only weeks before he died. But she was also singing for other departed counterculture heroes like Jim Morrison, Janis Joplin and Brian Jones. She and her baby boomer peers felt, with some justification, that their lives had already been permanently altered by loss.

Forty years later, those losses appear minuscule compared to what Smith has suffered since. Her parents. Her brother. Her artistic kinsman Robert Mapplethorpe, whose photography helped make Horses such an arresting statement. Her bandmate Richard Sohl, whose playing so enlivens the album. And then there are Smith’s listeners, you and I. For how many important people in our own lives are we grieving, and for how many more that we’ve never even met, in New York, Paris, Charleston, San Bernardino, Colorado Springs? In 1975, the final moments of “Elegie” must have been chilling. Today, they’re a guaranteed tearjerker.

All of which is a long way of saying that the kind of pretentiousness and self-indulgence on display in Horses is the kind everyone needs from time to time. It’s a positive thing to be reminded of Smith’s wild-eyed belief in the power of rock to provide catharsis, to soothe, to heal, to transform. Unlike many of her generation, she’s never given up that belief. She was still proclaiming it loud last Sunday through her very presence on stage with U2 in Paris. Would the world be a healthier place if more of us shared her faith? It could be worth a try. 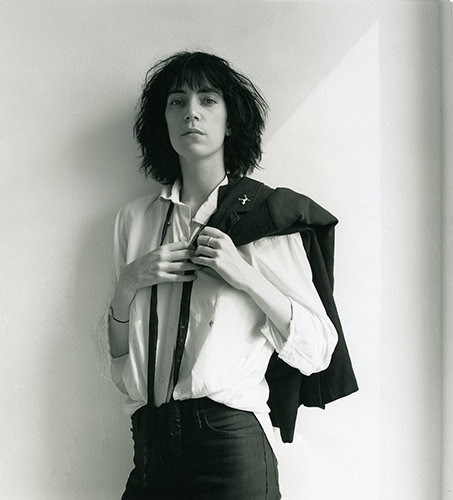