Michael Stillman is the 35-year-old heir to the Smith & Wollensky steakhouse empire built by his father, 78-year-old Alan Stillman, also best known for opening the first T.G.I. Friday’s. Since joining his father at Smith & Wollensky after his graduation from Brown, Michael has been leading the charge in modernizing the powerhouse group beyond the stuffy and familiar, and into the realms of “New American” and beyond. There will always be the mainstays like Smith & Wollensky, fueled by old-school Manhattanites, tourists, and even a band of loyal Irishmen I dined with on St. Patrick’s Day, but downtowners need their high quality proteins too. Enter Quality Eats, which takes another progressive step for the “Quality” brand into casual dining. The umbrella also includes the relaxed Quality Meats and Quality Italian in Midtown.

Quality Eats delves into the land of the hipster millennial in the West Village who might value innovative gastronomy over the perfect cut of beef. The dishes are quirky, even fun compared to their tried and true brethren where Porterhouses and whipped potatoes reign supreme. What’s more, you can actually wear jeans here without a scoff from the maitre’d.

However, like any respectable steak joint, the meat stands alone. There are no rubs or heavy sauces to mask their natural flavors. That’s why the imagination of Chef Ryan Bartlow comes into play with the appetizers, side dishes, and desserts. Take, for example, the Grilled Nueske’s Bacon over served over peanut butter and Jalapeño jelly, and topped with crunchy apples. It sounds gross, we know, but it was by far the best dish of the evening thanks to its pairing of unlikely ingredients. There are also hush puppies filled with cheesy spinach, and baked potato monkey bread, both of which strike a chord of familiarity and innovation.

These disparate qualities not only make the food enjoyable, but also memorable for the millennial set hellbent on unique experiences to later share as a tastemaker amongst their peers. For dessert, there’s the Sticky Toffee Pudding Pan for Two by Executive Pastry Chef Cory Colton, which sparks an entire narrative in itself making it shareable beyond the dinner table. It arrives baked into a miniature cake pan. Diners provide the toppings themselves by pouring the warm butterscotch sauce over the cake, and scooping out their own dollops of vanilla ice cream from a cardboard container that might have appeared from a Duane Reade freezer if it was not for its branded hallmarks. Thus, much of the work is forced onto the guests, but therein lies the unique experience that can even trump taste. The story of assembling the dessert is far more interesting to pass along, both visually and verbally, than a simple review of “delicious” – although it absolutely was just that.

This is one of them #latergrams – epic dessert spread at #qualityeats

Like this dessert, the dining experience is also witty, playful, and picture perfect for Instagram. The plates are etched with graffiti scribbles proclaming the meal’s organic roots. The wines come in stackable stemless pods, which allow guests to customize their wine bottles for the evening by choosing up to three different bottles (white, red, or rosé). The three separate stacked glass chambers are put together on top of each other to form a traditional wine bottle. Even the bar, where Bryan Schneider expertly slings quality cocktails, includes crayons labeled with steak preparations (i.e. Rare, Well Done, and Charred) to take us millennials back to a time when we didn’t have a cell phone to speak of or in to. 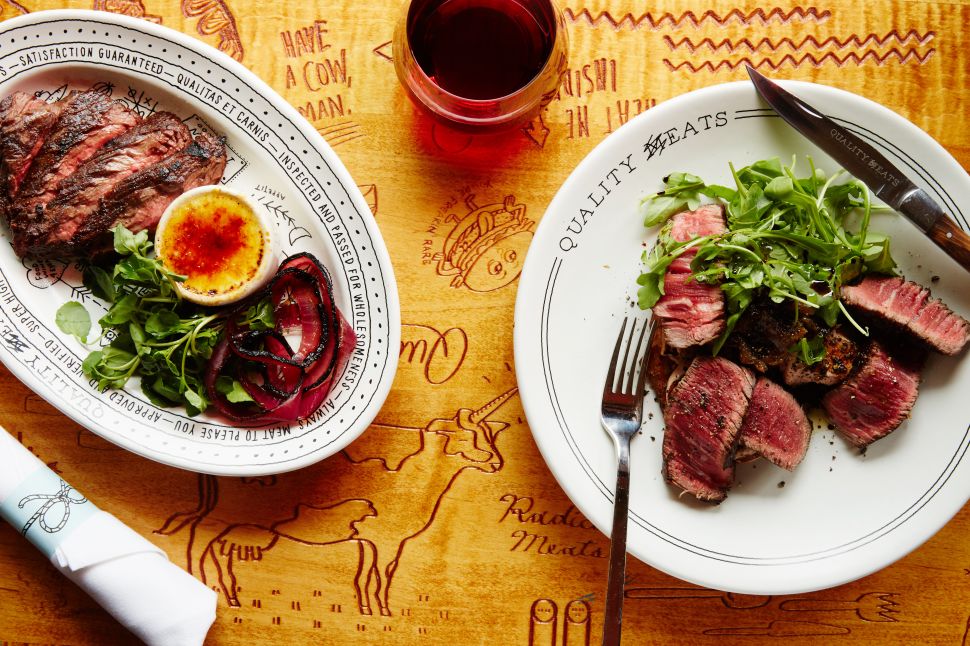