Tim Gunn, who made “make it work!” an oft-repeated anthem, has spent the last season of Project Runway Junior sharing his considerable knowledge with the next generation of designers. On last week’s episode, challenge winner Peytie Slater designed a Lands’ End backpack inspired by the Let Girls Learn Peace Corps initiative, which led to an appearance by the First Lady. To celebrate the collaboration, Tim Gunn, judge Aya Kanai and winner Peytie gathered at the Lands’ End holiday pop-up shop to discuss the show’s trajectory.

Surrounded by snow boots and flannel, Mr. Gunn, who is somehow even more charming in person, shared his thoughts on working with teens, trend pieces and what every New York woman needs in her closet. Mr. Gunn describes the contestants as “unbelievable,” with incredible work ethics, especially since the youngest turned fourteen on last week’s episode. “They execute everything. There are no little elves behind the scenes. The time is real. They’re phenomenal. I’m literally in awe. That’s why the judging is so difficult.”

When it comes to breaking teens heart on television, he was wary at first, but quickly learned that the insatiable young designers were eager to hear his feedback. “I was worried about it, I really was. I thought I’d have to walk on egg shells. I learned our first challenge, ‘bring it on.’ They want it, they’re resilient. They’re pure joy. I couldn’t get enough of them.”

Mr. Gunn is always outspoken, whether he’s calling for an end to horse carriages or opening up about Anna Wintour. He has been open about his dislike of many fashion crazes, including ones the Kardashian family disseminates. The trendy teens he worked with were fans of crop tops, which he can’t stand. “We did have a lot of conversations about crop tops, which were certainly on trend, but at one point I was having them chant in the designer’s lounge after the challenge together, having them say ‘no more crop tops!'”

Despite his love of the classics, he still keeps up with designers (he just doesn’t keep up with the Kardashians). For favorites, he says “I’m loyal to my Proenza Schouler boys because they were my students. I’m always a fan of DVF; I love everything that she does. I like innovation, creativity and staying power.” When it comes to celebrity style icons, he’s a fan of Cate Blanchett, Helen Mirren and Anne Hathaway.

With the variety of challenges over the years, the appearance of the First Lady was still the ultimate fangirl moment for all involved, including Mr. Gunn. “To have Mrs. Obama present it, does it get any better than that?” he asks. Another favorite challenge was the show’s premiere episode in 2004. “For me it’s emotional, it has to be episode 1 of season 1 when we went to the grocery store, we went to Gristedes. It was that fresh first moment where there were no pre-conceptions, there’s no precedence for anything. The whole show was really seminal.”

When it comes to past Project Runway winners of the adult variety, Mr. Gunn adores Christian Siriano. He’s equally passionate about Sean Kelly, the winner of season 13. “He is on a trajectory now, high end retailers are really clamoring for his work. I mean, he’s 25, he has the world ahead of him and I really think he’s going to be the next big thing.”

Another fresh designer is Peytie Slater, the winner of the challenge. At only 15, she’s a sunny California girl who shares, “I wasn’t happy with my dress after the first challenge, it was kind of a disaster.” When she discovered the Alice + Olivia store, the colorful prints inspired her.

Along with Alice + Olivia, Mr. Gunn has been a major inspiration. Ms. Slater gushed, “I really think he has taught me to be myself. The different designers on the show are so completely different it’s crazy. Sometimes I’d think, oh my gosh, should I change my whole boho vibe? He’s really taught me to stick to my gut.”

Mr. Gunn hasn’t just inspired a generation of designers to create, he’s influenced fans who still regularly quote him. On his signature catchphrases, he admits “I love hearing it. The funniest thing is when people shout it from cars.” 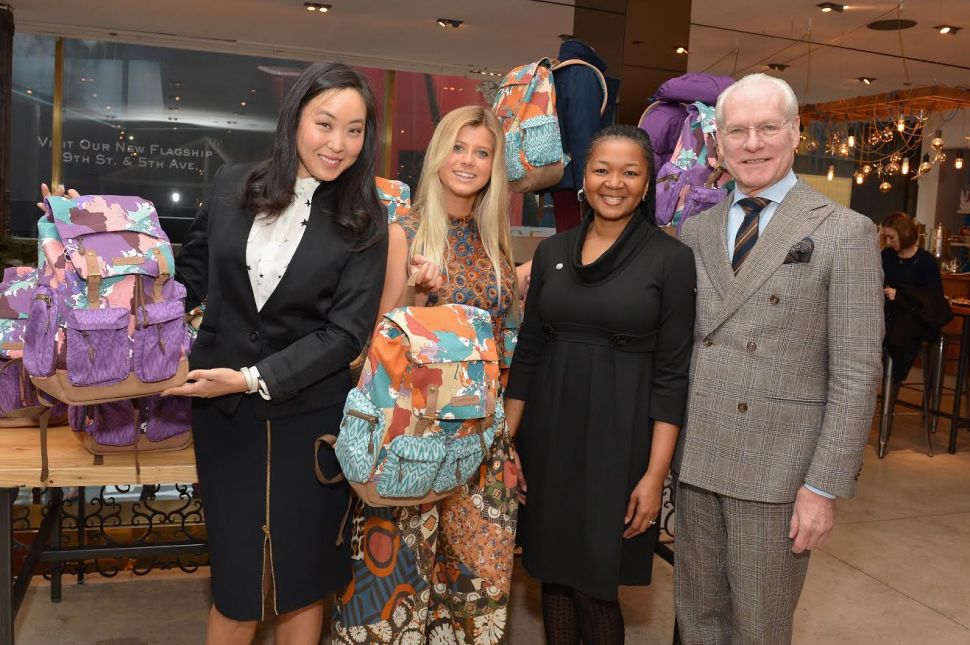