Transparent uses a lot of signifiers to great effect—music, clothing, language (especially in these flashbacks to the Berlin era, where everyone talks like they’re in current-day Pasadena)—but none so deftly as makeup. It’s apparent in its use, misuse and lack thereof. Maura is the only Pfefferman who seems to know how to apply it correctly, which makes sense, as she’s the one who spent years practicing it in secret. Ali uses it like warpaint: we saw her first season getting a department store makeover that made her look grotesquely pale as a way to get back at Maura the morning after her ecstasy-fueled acceptance. (She allows the makeup to be purchased for her and later returns it for a cash refund.) Now she’s putting on bizarre eyeshadow that is to recappers what The Dress was to the Internet earlier this year. (Come on guys: it’s orange, right? Not yellow.)

Sarah, on the other hand, has gone in the opposite direction by giving up on makeup entirely. Not only does she stop wearing it out, but when confronted with a case of eyeshadow palette belonging to Len’s new girlfriend’s in the bedroom of the house they’re now bird-nesting, she approaches it with skittish incredulity: first dabbing her finger curiously into a shade, dropping the entire thing on the carpet, flipping out, and then making the stain so much worse by bringing wet towels into the mix. (“Everyone knows not to do that!” my sister moaned while covering her eyes during that scene. “Stop, stop stop!”) But Sarah’s apparent un-learning of makeup’s effects reflects her increasingly slippery grip on her own womanhood, now that her role as both a sexual object and a parental unit has been called into question. Even her orgasms—which she has by imagining herself being spanked by a paddle by her school’s old disciplinarian Mr. Irons—seem haggard.

Only Maura seems to know how to apply it with a deft hand. After all, what is makeup if not a learned art signifying womanhood? Ali and Sarah were born as women, so they can choose to apply or not apply makeup as they see fit. For Maura however, makeup is something she’s had to learn how to do…and one we imagine she’d had years to practice with in secret.

That gulf—between what is quote-unquote “natural” and what is affected—is what drives most of this episode. When the second-wave feminist critique about transgenderism rears its head (as we knew it would inevitably would), Transparent doesn’t choose the easy route. It’s not as if some big bad lesbian comes to yell at Maura for being born with male privilege, or oust her from the women’s bathroom again. Nobody is accusing Maura of thinking she’ll make a better woman than women, à la Germaine Greer. Instead, it’s introduced here as the opportunities that Maura-as-Mort denied the Berkeley 7, a group of radical feminists whom Professor Pfefferman never accepted into her classes. While taking Ali to visit her old stomping grounds at UCLA in an effort to get her into grad school (“It’s not nepotism, I just want to see you use a few of my connections,” Maura insists, un-ironically), she is re-introduced to Leslie Mackinaw, the head of the newly re-titled Gender Studies program. (“Woman is a dirty word,” Leslie says, completely ironically, thus setting up a perfect tension between the two.) Maura doesn’t remember Leslie, but Leslie remembers Maura-as-Mort, the sexist academic who blocked her and her sisters from publishing and working on the editorial board of Perspectives on Politics. “I applied and applied and applied, and you accepted only men,” Leslie says with a wry smile, before closing her eyes and stretching out in her chair. “Oh, and this one chick who had these huge, huge tits that you couldn’t keep your eyes off of, if…if memory serves correctly.”

Maura tries to apologize: “I don’t stand by what I did back then…I don’t remember much of it, actually,” but Leslie’s reply is devastating in its implication: “Well, why would you remember it?” Why indeed: the institutional sexism had not just worked in Maura-as-Mort’s favor, but did so with appalling insidiousness: it never even registered to Maura-as-Mort that she was benefiting from the mere fact that she wasn’t a woman.

And this, finally, is what Ali’s been looking for: a way to defy her Moppa-as-father for, well, everything. For being able to buy her acceptance with money, for allowing her not to have a bat mitzvah, for basically being a passive agent in the way she was raised. It’s interesting that while we can understand Ali’s perspective, she never appears less than culpable: after all, she’s essentially angry because she’s been allowed to make bad choices. At the end of the episode, she gushes over Leslie’s poetry, and we hear her reading one of Leslie’s poems in a voiceover that mirrors (no pun intended) Maura’s “dancing with herself” scene in the previous episode. Except it’s also a reversal: instead of dancing on her own, we see the predictably nonconformist Ali defining herself as part of the lesbian community of both Syd’s and Leslie’s…and against her trans father. (Though again, Maura seems to be leaning toward lesbianism herself.) She even hooks up with Syd at the bowling alley party of lesbians, and it’s a tender moment, though one that’s hard to take at face-value (and not only because of Ali’s insane eye-makeup). The scene seems a little too idyllic, and Leslie’s poem is…well…this:

“I always put my pussy in the middle of trees like a waterfall, like a doorway to God, like a flock of birds. I always put my lover’s cunt on the crest of a wave, like a flag that I can pledge my allegiance to. This is my country. Here when we’re alone in public. My lover’s pussy is a badge, is a nightstick, is a helmet, is a deer’s face, is a handful of flowers, is a waterfall, is a river of blood, is a Bible, is a hurricane, is a soothsayer.”

This is actually a poem written by Eileen Myles, whom Jill Soloway based Leslie’s character on, and whom the Transparent creator began dating while doing research for this season. But is the poem supposed to be affecting…or just affecting Ali? And what would Ali know from her lover’s pussy…or anyone’s for that matter? Maybe the absurdity isn’t the poem itself (though it rings slightly absurd), but how Ali immediately latches onto it; to Leslie’s whole militant second-wave feminism brand (especially in how it relates to and against her Moppa) that rings false. It’s like she’s decided to become a lesbian, rather than actually being one. Ironically, it’s that privilege—the decision to change one’s gender, rather than being born with one—that Leslie is critiquing in the Old Boy’s Club of the Berkeley faculty lunch room.

So it’s hard to tell what to make of that final scene in a way that makes me wish I hadn’t read that fantastic Ariel Levy piece about Ms. Soloway in The New Yorker, since it’s harder now to separate the art from the artist, and to separate Ali’s infatuation with Leslie, Syd and her newly discovered sexual identity from Ms. Soloway’s relationship with Ms. Myles. But knowing we’re only in the second episode of the season, I think it’s safe to say that Ali’s newly discovered Eden is as fragile—and fleeting—as the one found in a 1930s Berlin cabaret. 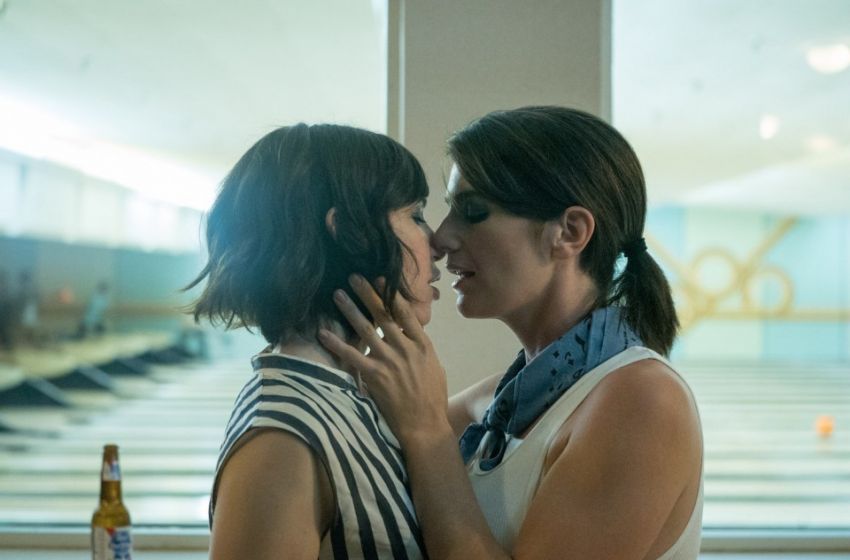