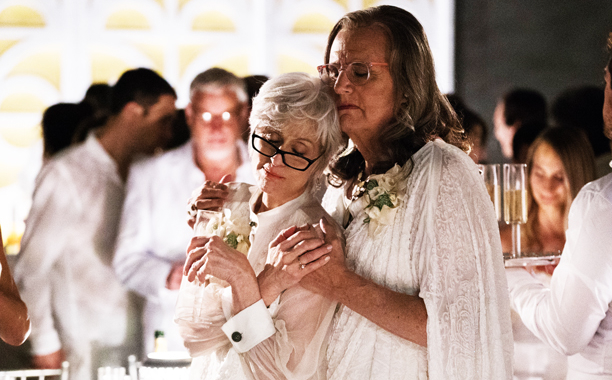 When its first season debuted, Transparent provoked millions of thought pieces and critical essays, examining not just the gender issues addressed in the Pfefferman clan, but the religious ones as well. It was lauded as being the “Jewiest” show on TV by both The Forward and Tablet, and resonated in a deeply personal way for anyone who spent their middle-school years wishing, like Ali (Gaby Hoffman), that they’d be given the option of bowing out of their bat or bar-mitzvah.

Not that you need to be of the same religious persuasion as the Pfeffermans in order to feel an almost eerie familiarity (or as Maura puts it, a “fem-iliarity”) with them…though I believe the show does resonate with a particular type of family dynamic. Take, for instance, Transparent‘s second season premiere, released one week early last night, which is essentially a bottle episode that takes place during Sarah’s wedding to Tammy. To watch the opening shot– the Pfefferman clan walking in and out of frame for a wedding portrait, shouting directives over each other while trying to herd everyone together for just one nice photo–is to be immediately transported to many a cringe-worthy family function, complete with the chaotic hand-gesturing.

Though maybe I’m just feeling a little tenderly: I have my own wheelchair-bound grandmother named Rose, although she doesn’t sound quite so narrow-minded as Maura and her sister Bryna make her out to be (My 92-year-old grandmother surprised everyone at Thanksgiving this year by showing up with a boyfriend twenty years her junior from her Jewish assisted living facility in Bethesda). Maura is clearly more comfortable in her own skin than the first season: when the photographer refers to her as a “Sir,” she doesn’t meekly grin and bear it, the way she did during the show’s first season when she was still finding her identity. Now she waves her hands and announces the picture time immediately over before storming off. Oy vey.

The Pfeffermans still can’t help make every occasion about them, as Sarah points out to Ali after learning from her that Josh has knocked up Rabbi Raquel and swore her to secrecy. “He’s making today all about himself,” Ali complains.

“And now you’re telling me,” Sarah retorts. “You’re making it all about you.”

So caught up is this family on their own interpersonal drama that they fail to notice one crucial fact: in Sarah’s rush to the alter to marry the twice-divorced Tammy was a reaction to being rebuffed by her own ex-husband, Len; that she in fact, isn’t ready to jump into a new, extended family when she hasn’t fully processed her feelings about her own. But so wrapped up are the Pfeffermans in their own perceived slights–Ali still mad at Josh for sleeping with Syd; Josh still mad at Ali for telling Rabbi Raquel he’s a sex addict; Raquel at Josh for telling Ali about her pregnancy; Maura at Sarah for inviting her estranged sister (leading to a hilarious misinterpretation of the Facebook game “Bejeweled Blitz”); Shelly at Sarah’s too-dark eyebrows (God, I had forgotten just how right this show gets its smaller moments like these)–that they fail to register Sarah’s cold feet until its time for the Horah.

But just like you don’t need to have a Moppa in your family to relate to Transparent, the Jewish experience isn’t essential in order to understand the Pfeffermans on an emotional level. The fact that the Pfeffermans personify a certain Jewish archetype of the constantly bickering, expressive family unable to suppress even the tiniest grievance for a short period of time lends itself well to the thrust of the show, where no secret can remain buried for very long, and where exasperation, sarcasm and familial burnout go hand in hand with the more prominent themes of acceptance, adaptation and tolerance.

We also learn this episode that Maura and Shelly have moved back in together after the death of Shelly’s second husband, Ed Paskowitz and the demise of Maura’s living situation in her apartment complex with Davina. (“Yuppies,” Maura offers, in way of cryptic-yet-perfect explanation.) Whatever the nature of their relationship–mere companionship, or a rekindling of their marriage– it’s clear that Shelly stands by her eruption from last season’s finale after: “I don’t want you to call me. I want you to be here. He…she’s the only one who comes!” Whatever remains between Shelly and Maura, their apparently unconditional love and support for each other make them (for now) the most healthy relationship on the show. As Shelly says at the end of the episode, cradling Maura’s face in her hands in their shared hotel room, “I hope you feel beautiful because you are so beautiful.” They kiss tenderly, as we pan across the hotel to the next room over, where Sarah is breaking the news to Tammy that she doesn’t want to be married. Luckily, Rabbi Raquel had admitted she hadn’t sent in their paperwork to the courthouse yet, allowing Sarah a legal, if not religious, way to back out of the nuptials. “What’s a wedding then?” asks Ali, who never misses an opportunity to be morally outraged. Rabbi Raquel’s explanation–that it’s just a really, really expensive play–just infuriates her further: so absorbed is she in her own disbelief at yet another sacred tradition turned meaningless that she misses Sarah’s own, heartbreakingly hopeful smile…maybe she hasn’t done something irreparable after all.

That’s the Pfeffermans in a nutshell, isn’t it? Between all the yelling and drama and narcissism, this is a family where the important revelations can almost slip by unnoticed. Until, of course, they can’t. 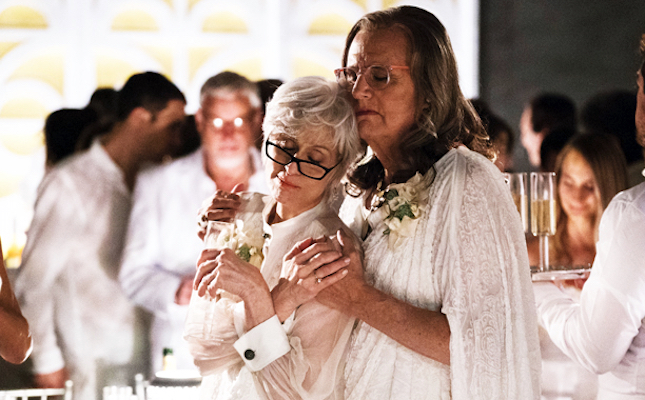