I love mean comedy. Not cringe-comedy, which is something else completely: stuff like GIRLS, The Comeback or hell, even this season of Transparent aren’t rooted in the comedy of conflict and confrontation, but use those humiliating moments to move the plot forward and try to make us sympathize with “unlikable” characters.

No, what I like is comedy that revels in the cruelty and nihilism of its characters behaving badly and absolutely not giving a shit about it. Seinfeld. Curb Your Enthusiasm. It’s Always Sunny in Philadelphia. You’re the Worst. Archer. Shows where the main characters aren’t merely unlikable, but distinctly hateable: either petty and small, psychopathic and grandiose, cruel and unusual (or some combination of all of the above). Because of some weird loophole in the laws of comedy, somehow characters who aren’t self-aware enough to know when to be ashamed of their behavior aren’t cringe-worthy, because we’re not stuck feeling bad for them. We’re given permission to cackle at their misfortune, and delight in their most base moments. They might be loathsome, but–twist!!– the worse their behavior is, the more entertaining they are.

As far as I can tell, there’s only one comedy besides It’s Always Sunny that succeeded so well in doubling-down on the complete ruination of its characters. The incredible UK comedy Peep Show, which ended its nine season run with a finale last night on Channel 4, makes me want to call up Stephen Falk and tell him “No, THESE GUYS are the Worst.”

Peep Show–which I’ve proselytized before, so let’s not get bogged down here–is about two roommates: Mark (middle management at a bank, a job that his personality couldn’t be more suited for) and his college friend Jez, who doesn’t do shit except get high and make terrible trance music with his best friend, Super Hans. The brilliance of the show isn’t the dialogue, or the situations the two get themselves into (although both are pretty funny), but the internal monologues of the characters, which you can hear whenever the single-camera comedy distorts into a fish-eye lens allowing you, the viewer, Being John Malkovich-level access into the heads of these two losers. That’s not name-calling, just a fact: Mark and Jez are both failing at life, albeit in different ways.

Just a brief rundown here of their antics over the years:

The time Jeremy ran over, set fire to and then ate the corpse of a dog:

The time Mark got cold feet at his wedding and hid in the church:
[youtube https://www.youtube.com/watch?v=LTAyoddm704]

The time Jez joined a cult “for a laugh”:
[youtube https://www.youtube.com/watch?v=TJOKQRnAm30]

The time Mark kicks out his new roommate by allowing Jez and Super Hans to roll him up in a sleeping bag, drag him into an elevator and waterboard him with beer:
[youtube https://www.youtube.com/watch?v=TZh0J9M-IvQ]

And that barely scratches the surface of the atrocities of two men, one of whom– as described by tvDownload recapper Maggie Serota last night–may be the very definition of the phrase “banality of evil.”

You can find all of Peep Show‘s first eight seasons on Netflix, and the most recent one on YouTube if you know where to look, but since the finale aired last night in Britain, I’ve done you all a favor and uploaded it myself for your viewing pleasure. You’re welcome, monsters.
[youtube https://www.youtube.com/watch?v=ZrMs8MzBRvI] 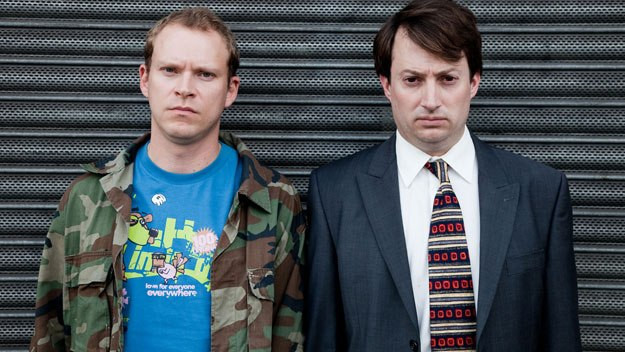