Skater and Vine enthusiast, @Luciano, posted this short video of a little girl heelflipping in a fairy princess costume in September, and it has been crushing on Vine here in the final week of 2015. We’ve started seeing it on Facebook and Twitter, repeatedly. As of this writing, it has 210,065,070 loops and counting (it’s had 30,000 views while we wrote this story).

After exploring @Luciano’s videos quite it a bit, it looked plausible that this might have been his original video. He posts lots of videos of people skating, after all. Yet, in the spirit of The Fat Jew, it’s a reposted video, without attribution. It’s hardly the only account to repurpose the video. It’s all over Facebook, both attributed and unattributed, but the new resurgence seems to have started with this Vine, which may be the most popular instance to date.

The determined young woman with the wings on her back is Rayssa Leal, of Brazil (h/t to The Huffington Post). She originally posted the video on her Instagram account and her Facebook. It was popular on the Facebook-owned social network, but only got 7,180 likes there so far, with 42,000 likes and 88,000 shares on her Facebook. Very respectable, but since @Luciano edited it down and posted it on his own, it has 161,000+ likes and 81,000+ revines.

Ms. Leal’s original video is a richer story. It’s a little document of determination, showing her fail to land the heelflip twice before she comes through (in slow-mo) to nail it, to the excited delight of her friends and fans, but, as the parody Twitter account and media critic @ProfJeffJarvis likes to remind us, “Context kills pageviews.”

@Luciano posted her version cut down to just the successful heelflip and the delight that follows (which is how we originally saw it on Facebook), leaving the triumphant impression that this was just another day on the board for the young skater. That’s a fun story, making it fun to share, but it isn’t true. She nailed this heelflip only after several tries and some painful falls.

Neither Ms. Leal nor @Luciano were immediately available for comment.

Charmingly, the tiny shredder seems to love the fail video genre, which is a hallmark of a skater. Here’s another one of her not quite getting her trick.

Ms. Leal joins a chorus of young women pushing their way into the boys’ pastime. For example, Atita Verghese is on tour in India right now, both bringing the sport of skateboarding to the country and encouraging young women to take part. Shortly after discovering the sport, Ms. Verghese helped build a skatepark, as she recounts on the website of a women’s skating organiztion, Rokeo.

It all started with that video for Tom Petty’s song “Free Fallin’,” probably.

(In truth, the star of that video, Devon Kidd, formerly “Jenkin”, really did go on to do serious competitive skating of her own; she was a pioneer as the only woman competing in speed boarding, the terrifying sport of racing down mountain roads on thin pieces of wood with four wheels attached) 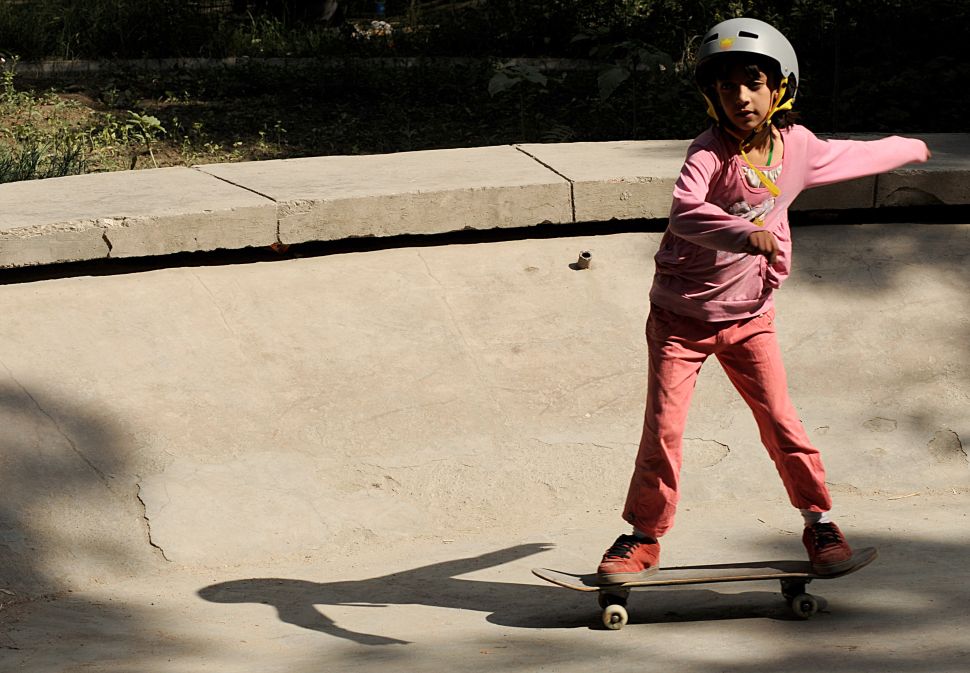