It’s rare that Fox News mouthpiece Bill O’Reilly expresses an opinion that even those on the American left embrace, but his summary of Russian President Vladimir Putin seems to reflect the attitude of just about all Americans. The cable host has used the following expressions when speaking of Mr. Putin: “a KGB thug,” “a menace to the world” and, simply, “a killer.”

According to the Pew Research Center, in 2015 three-quarters of Americans have been “critical of Putin” with only 21 percent having “confidence” in him. By the same poll, Russian sentiments toward U.S. President Barack Obama are even lower, with only 11 percent of Russians having faith in Mr. Obama—down from 41 percent in 2011. This drop is due, in great part, to the economic sanctions imposed by the West on Russia, and American policy on Ukraine and Syria. But these are not the only reasons.

As in America, the Russian public is largely informed by TV shows and other media, which never miss an opportunity to remind viewers that the current occupant of the White House is the world’s biggest villain—but not one to be taken too seriously.

Russian television has its own Bill O’Reilly. His name is Dmitry Kiselyov, and he is the host of his own weekly program News of the Week. This week’s heroes are FOX’s Ralph Peters and actress Stacey Dash, for the simple reason that they “cursed” Mr. Obama last week. That’s good enough for Mr. Kiselyov.

“I am not going to clog your brains with the usual banalities by Obama,” was all Mr. Kiselyov said to his viewers last Sunday, after the U.S. president’s speech from the Oval office. Rather than reporting on the substance of the U.S. president’s policies, Russian media prefers stories on Mr. Obama making faces like ‘Grumpy Cat,’ or on his wife’s adoration of rap music or other easy-to-digest memes:

“U.S. President Barack Obama started to laugh when asked by The Daily Show’s Jon Stewart who the U.S. is bombing in the Middle East. It’s not his first appearance on the comedy show,” reported major Russian news agency RIA Novosti.

“During his presidency, Obama spent more than 1,100 hours on the golf course—or one-and-a-half months without breaks for sleep or food. He played golf 247 times during his presidency, breaking the record of Dwight Eisenhower who did it 210 times,” a major Russian tabloid reported.

Barack Obama is an idiot.

“Obama linked the spread of terrorism to climate change. At the same time, the American president expressed confidence that terrorism will be defeated.” Not having given any specifics on how to deal with the climate change, Mr. Obama cannot be trusted in the war against terrorism, concludes RIA Novosti.

Barack Obama is a liar.

Mr. Putin is a macho alpha-male. Mr. Obama is a…what?

Mainstream media dodges this answer, leaving the task to pro-Kremlin propaganda that quickly and willingly provides it through videos like that of popular nationalist comedian Mikhail Zadornov, author of the widely known slogan, “Americans? But they are STOOOOOOOOOOPID!”

Instead, the answer is in the short and offensive motto: “Obama [is a] schmoe.”

In Russian, “schmoe” resembles the Yiddish “schmuck,” but with much stronger negative connotations.

“Obama schmoe” has recently become an all-pervading part of Russian pop culture. There are “Obama schmoe” bumper stickers (in addition to others, like “Obama is bad” and “Obama is the devil”), and there are T-shirts with pictures of Mr. Putin whispering into the ear of the embarrassed American President, “Obama, you are a schmoe.” 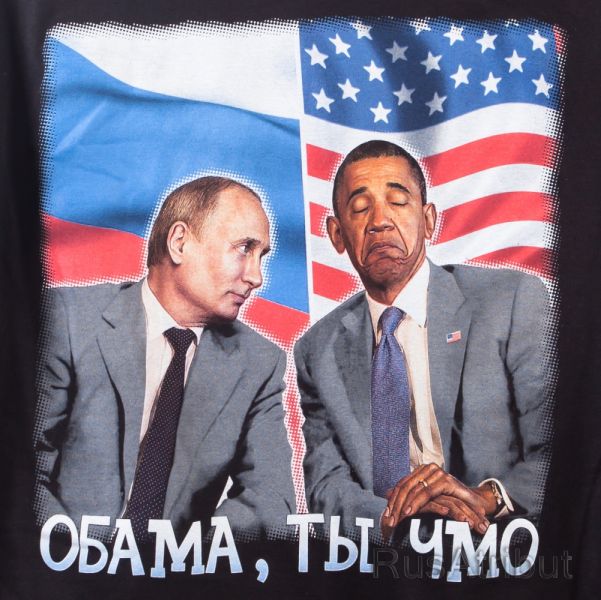 Last summer, during his trip to Russia, French Senator Yves Pozzo di Borgo was tricked into holding the T-shirt, with which he was photographed, La Parisien reported.

There are satellite photographs of the slogan in white paint on the runway of the Russian air base in Syrian Latakia. There, it serves as a background for Russian warplanes.

The term is so popular that it made its way into Wikipedia (but was later deleted because of user complaints).

On the surface, the Kremlin avoids putting President Obama down, though the Russian government approves the trend and, from time to time, openly endorses it.

Celebrating the 10th anniversary of spreading the Kremlin’s views to the world, Russian government-funded TV network RT kicked hard at President Obama in a recent promotional video. The film depicts what Mr. Obama and Secretary of State John Kerry will be doing 20 years from now, at a time when Edward Snowden is president and the whole world watches nothing but RT. Nobody is afraid of America any longer, and Mr. Obama and Mr. Kerry have a drink. “Yes we can!” says a decrepit Mr. Obama as he goes for a beer in the fridge.

When RT speaks to a mostly international audience, the anti-Obama message it spreads is only on the verge of being hostile and is never personal. When presented for domestic consumption, however, the attacks on the U.S. president—orchestrated by the Russian government—are straightforward.

During last summer’s Day of Youth celebration in the Siberian city of Bratsk (population around 250,000), the local administration organized a “Who Can Kick Obama Higher” contest. A life-sized poster of Mr. Obama was placed in the central square of the city and, to the joy and enthusiasm of the young participants, the rules were simple: the winners are those who kick Mr. Obama highest in the face.

In February, during the Maslenitsa folk holiday—celebrated in Russia in the last week before Lent—effigies of the U.S. president were burned in Kaliningrad, Sevastopol and other cities. In the Siberian city of Barnaul, the organizer of the burning was “an Afro-American who looked like Barack Obama,” who was a local representative of the LDPR party in Russian Parliament.

The holiday also included a puppet show for children, during which Russian puppet Petrushka killed and burned the American president. The performance welcomed by the Governor of the Altai region, Alexander Karlin. “This is a folklore tradition,” he said. “During Maslenitsa the people always have burned the effigy of Winter, and she never was offended by this. There is no political context here.” Organizers denied that Barack Obama was a puppet in the show.

In July, in the city of Perm, the Mr. Obama’s effigy was found hung under a railroad bridge not far from the local university with was a nameplate that read, “One dead Obama = 7,650 live Ukrainians.”

The perpetrators of this barbaric “performance” were never found—in fact, according to v-kurse.ru,  police said that “the hooligans” had done nothing unlawful. Just last week, in the Kuban region of Russia, a crowd of around 500 took part in the burning of the effigies of both Barack Obama and Recep Erdogan for “shooting down the Russian plane by Turkey at the command from America.”

Blatant racism has long accompanied attacks on the U.S. President’s image, but until recently never became a cause for concern among Russian authorities.

Last April, in the city of Samara, local company hung a poster in the middle of the street that read, “Shame on you, unwashed chimney sweep!” with a picture of Barack Obama’s face. The company received national notoriety and a great deal of new business, but was fined 10,000 rubles ($150) for breaking advertisement laws.

In the center of the city of Lipetsk, a local printing firm put a huge commercial banner with Mr. Obama’s face and a tear printed under his right eye. “We work for everybody—but Barack Obama,” it read. But this company was not fined because the banner didn’t break any laws, and “Barack Obama did not complain to the department personally.”

Last week’s disgustingly racist scandal finally broke the patience of the U.S. Embassy in Moscow, which had been silent despite all of the vulgar anti-Obama assaults in Russia. The high-end Bakhetle supermarket chain displayed cutting boards styled as the 2016 calendar that, according to Chinese horoscopes, will be “the year of monkey.”

“The product features a family of monkeys,” AFP reported, “with an image of Obama’s face superimposed onto that of the smallest primate.”

The owner of the supermarket chain, according to the Maxpark social network, is Mrs. Muslima Latypova, the deputy of the regional Tatar Parliament.

“It is disgusting to see that such blatant racism has a place on Russian store shelves,” Will Stevens, the spokesperson for the U.S. embassy in Moscow wrote on his Twitter. 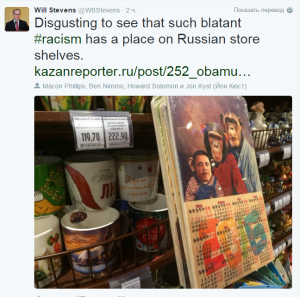 The response of the cutting boards’ producer was even more disgusting than the “product” itself.

“Nowhere on the cutting board is it written that this is Obama. These are nothing but boards with monkeys on them,” said the commercial director for the “Eurostyle” manufacturing company, Mr. Kirill Naumenko.

The boards were removed immediately following the angry reaction from the U.S. embassy and the official representative of the store chain made the public apology. But, yet again, there was no public apology from representatives of the state, and no signs that the ugly racist “performances” and personal insults against the U.S. president will be ended once and for all.

OUT OF GAS: WHY TURKEY IS LOSING ITS BATTLE WITH RUSSIA 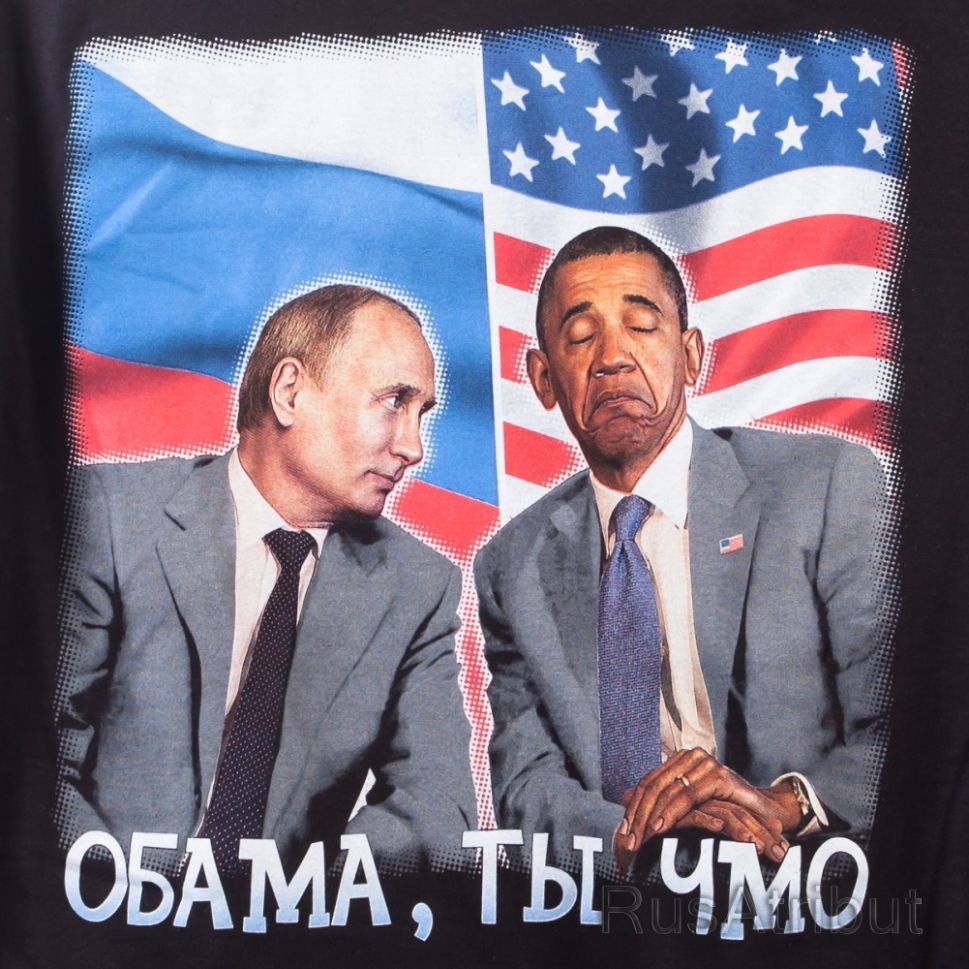