There are certain happy decisions in life for which there is no wrong answer. Chocolate or vanilla. Ocean or bay. Beatles or Stones. Tango or Cash.

Sure, people will have their preferences, and arguments can be made, but at the end of the day, regardless of which you choose, you’ll probably be pretty satisfied.

This observation is by way of introducing the following conundrum: Which is the more desirable of the Upper West Side’s two grand scenic thoroughfares—Central Park West or Riverside Drive?

A quick price check would suggest there’s no contest. Apartments on CPW command a hefty premium compared to those on Riverside. “So I think we would have to say that the market perceives [CPW] as more desirable because it sells for more money,” said Corcoran Sunshine’s Beth Fisher.

But does more expensive necessarily mean better? (By that logic, the Brooklyn Nets should be a 60-win team.) And besides, isn’t there something a little bit vulgar in reducing everything to a simple matter of dollars and cents?

What about the more subtle questions of personal taste? Quiet and seclusion versus hustle and bustle? Hudson River views versus a Central Park vista? Grant’s Tomb or Strawberry Fields?

“It’s a great problem to have,” said Stribling broker Jeffrey Stockwell, who has lived and sold in both areas. Currently, he represents 360 Central Park West, a 126-unit condo conversion of a 1929 Rosario Candela building. Fundamentally, he told the Observer, Riverside appeals most to longtime, committed Upper West Siders, while neighborhood newbies tend to side with CPW.

“I think Riverside is for real West Siders,” Mr. Stockwell said. “People who are new to the area often choose Central Park West because it’s closer to the East Side and easier to get to downtown.”

“I think newer New Yorkers will gravitate more toward Central Park West,” agreed RealDirect CEO Doug Perlson. “The longer-term Upper West Siders, they are more likely to buy on Riverside Drive. When you’re looking for a pied-a-terre in New York, everyone knows Central Park West and that there are certain addresses there that are going to be appealing for your first apartment in New York or as a place to park cash if you’re from out of the country.”

Somewhat complicating this last point, however, is the relative dearth of condos on CPW, which, noted Douglas Elliman’s Victor Barbenès, can present a challenge to overseas buyers.

“The thing about Central Park West is that, except for the area right above Columbus Circle, there are no condos,” he said. Riverside below 72nd, on the other hand, features a string of newish condo developments including One Riverside Park at Riverside and 62nd Street, The Aldyn at 60 Riverside Blvd, The Avery at 100 Riverside Blvd., and Trump Place 220 at 220 Riverside Blvd.

(For you hopeless pedants out there, yes, technically Riverside Boulevard and Riverside Drive are different streets, but for the purposes of the question at hand we’re considering them as one.)

“You have a lot of new-development condos with a lot of amenities and river views,” Mr. Barbenés said. “And so that has been really attractive to especially international buyers and investors.”

These buildings have also proved a draw among the (relatively) budget conscious, Ms. Fisher told the Observer. Corcoran Sunshine is handling sales at One Riverside Park, which, she said, has managed to attract some former residents of CPW super-building 15 Central Park West.

“We have seen people move over from 15 CPW to 50 Riverside, and I think part of that is that for the same dollars they can get a lot more space and a great view,” she said. “For $20 million on Riverside you are in a spectacular full-floor, 6,000-square-foot residence.”

A comparable apartment at 15 CPW, meanwhile, would run you in the $50 million range, Ms. Fisher added. “So for some people the value is just so overwhelmingly better.”

“If I have a client who is looking for a large one-bedroom or two-bedroom under 86th Street for less than $2 million, they are going to be looking on Riverside Drive,” said Platinum Properties agent Teresa Stephenson.

Of course, if it doesn’t exist, no amount of money can buy it. And this is often the problem for clients looking for large prewar apartments on Riverside, said Pinkwater Select founder and CEO Royce Pinkwater.

While the street’s newer condos “afford great space and great views…if you have a buyer who does not prefer those buildings but wants something large, they are in trouble,” she told the Observer, noting the difficulty of finding older units along Riverside in excess of 4,000 square feet.

“If they have large apartments they are hiding them, because they are not ever on the market, really,” she said. “I was working with someone recently, and we were looking assiduously all over Riverside Drive for three- and four-bedrooms and it was like, dream on. We couldn’t find beautiful, well-proportioned prewar space that appealed to my buyers, and they were not being unreasonable.”

‘I was working with someone recently, and we were looking assiduously all over Riverside Drive for three- and four-bedrooms and it was like, dream on.’—Pinkwater Select founder and CEO Royce Pinkwater

So you have price and size—your classic real estate considerations. Then there are the more ancillary matters. For instance, if you plan to send your kids to private school are you leaning toward an East Side spot like Dalton or Spence or more toward the Hilltop trio—Riverdale, Fieldston, Horace Mann?

If the former, living on CPW makes for an easy commute across the park, Mr. Stockwell noted. On the other hand, the latter are a straight shot up the Henry Hudson from Riverside.

Dog owners also have a choice to make, he adds. Riverside Park has enclosed dog runs. Central Park doesn’t. In the latter, though, dogs are allowed to roam off-leash from 9 p.m. to 9 a.m.

“So there is just this fabulous dog culture where people from all over the city from all different backgrounds come together and you sort of become friends in sweatpants without even knowing who the other is at the beginning,” Mr. Stockwell said.

The weather is another factor, said BOND New York broker Svetlana Choi. “There is a lot more wind [on Riverside].”

It’s true, said Ms. Pinkwater, Riverside “is definitely cooler and definitely much windier” than CPW. Whether this is a good or a bad thing obviously depends on the season. When it’s hot out a cool breeze blowing in off the can be nice. Not so much, on the other hand, an icy gale whistling up the sidewalk in the middle of January. (Indeed, perhaps an even-handed “middle-way” approach is best—keep your year-round residence on CPW and your summer place on Riverside!)

Ultimately, if it’s status you’re after, CPW is probably the way to go. “I think there’s definitely some cachet that comes along with Central Park West,” said Ms. Stephenson.

“Without a doubt, Central Park West is the more prestigious New York location,” Ms. Pinkwater said. “You have The San Remo, The Beresford, The Dakota, 15 CPW, some of the finest buildings in New York City. Riverside Drive can’t compete with that.”

True, said Douglas Elliman broker Paul Zweben, who has lived on Riverside for the last 19 years. “There are certain buildings on CPW where you walk in and you’re like, ‘I AM THE MAN!’ ”

‘There are certain buildings on CPW where you walk in and you’re like, “I AM THE MAN!” ’—Douglas Elliman broker Paul Zweben

Those looking to keep things low-key, on the other hand, will likely find Riverside more to their liking, RealDirect’s Mr. Perlson said.

“Riverside really has I think a super-residential feel to it, versus CPW, which just has a ton of action between the subways and busses and the business of the park in general,” he said. “People say Central Park is New York’s park, but I would go further and say that it is almost an international park. People from all over the world come there. Whereas Riverside Park is more of the Upper West Side’s park, and it’s very kind of family-oriented and residential.”

And don’t forget the little details. For instance, are we talking about CPW with full park views or an apartment looking out the back of the building?

The difference between the two, noted Argo Real Estate broker Harold Kobner, is not insubstantial. He cited the example of a two-bedroom with park views at 65 Central Park West that recently went into contract for $5 million despite needing a gut renovation. The same apartment in the back of the building, he said, would probably sell for around $3.5 million.

But while many would prefer a view on Riverside to a courtyard view on CPW, “it ultimately just depends on the priorities of that particular buyer,” Ms. Stephenson said. “Some people would rather face the back of the building at Central Park West than have a nice view on Riverside Drive.”

The Riverside apartment Mr. Zweben shares with his wife and fellow Elliman broker Carolyn Zweben has only partial river views, “so if I could move my apartment to Central Park West with Central Park views, I’m there,” he said.

What if he could keep the Riverside place but have full river views? 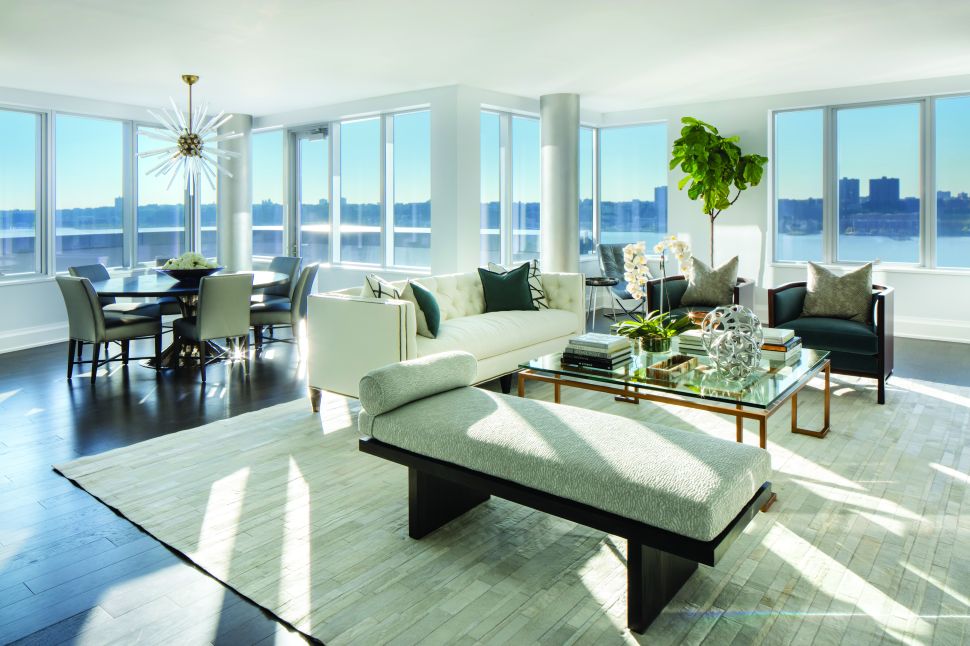 Filed Under: Upper West Side