Generally, when such articles define this coalition, it is considered to have three main components: black voters, Latino voters and young voters (aged 18-29). In other words, the “Obama Coalition” is comprised of the same groups who have been giving Democrats the bulk of their votes for a long, long time.

Indeed, using Census Bureau data going back to the 1996 presidential election, turnout within both demographics during President Obama’s two elections did exceed the levels at which these groups voted in the previous three elections. Nearly two-thirds of eligible black voters (66.2 percent) turned out in 2012, up from 64.7 percent in 2008 and 60 percent in 2004. And yes, Latino voters turned out at a 49.9 percent rate in 2008, as compared to 47.2 percent in 2004, and even with a drop-off to 48 percent in 2012, they still turned out at a higher rate than they had in the elections of 2004, 2000 and 1996.

But, looking at the same Census Bureau data, the trend toward increased turnout within these two demographic groups has been ongoing for at least the last five election cycles. Starting in 1996, when black voter turnout was 53 percent, black turnout in presidential elections has increased in every election by anywhere from 1.5 percent to 4.7 percent every cycle, with the smallest increase occurring between President Obama’s first election in 2008 and his reelection in 2012. Similarly, Latino turnout, at 48 percent in 2012, was up 4 percent from 1996, when it was 44 percent, but from 1996 to 2008, it increased incrementally from that 20-year low of 44 percent in 1996 to a high of 49.9 percent in 2008, then actually dropped off by nearly two points in 2012.

Republicans are going to need unprecedented levels of support from white voters to prevail in 2016.

Nor does it follow that the high levels of Democratic support among these two demographic groups in 2008 and 2012 was entirely attributable to President Obama. It is true that the president won approximately 95 percent of black voters in 2008 and 93 percent in 2012, but according to statistics published by the Joint Center For Political and Economic Studies, the Democratic share of the black vote has only sunk below 85 percent one time since 1960 (dropping to 82 percent in the three-way race of 2012) and exceeded 90 percent on two other occasions during that time (1964, 2000).

It is also true that President Obama captured more than 71 percent of the Latino vote in 2012, but even that was not a record for Democratic performance among Latino voters. According to statistics produced by the Pew Research Center, President Bill Clinton captured 72 percent in 1996, and the Democrats have failed only once since 1980 to capture at least 61 percent of the Latino vote—in 2004, when President George W. Bush held John Kerry to 58 percent. It is also worth noting that Republican candidate Mitt Romney’s perceived anti-immigrant stance and his unfortunate term “self-deportation” were widely believed to have contributed to his party’s poor performance with Latino voters in 2012.

“So,” you may ask, “what about the young voters? They came out in droves for President Obama, right?”

Actually, not so much. According to Census Bureau data, young voters’ participation only increased from slightly more than 20 million votes in 2004 to slightly more than 22 million in 2008—roughly in line with the increase in all voters—and then dipped back to about 20 million in 2012. There was a much larger increase in the number of young voters between 2000 and 2004—when the total went from just under 16 million to more than 20 million—than between 2004 and President Obama’s first run in 2008. According to Pew, President Obama also received a significantly smaller share of the 18-29 vote (60 percent) in 2012 than he did in 2008 (66 percent). It is true that he performed better among young voters than any candidate since 18-year-olds received the right to vote in time for the 1972 election, so the notion that they were uniquely inspired by Mr. Obama is not as easily dismissed; however, it is also true that there has only been one election since 1992 in which Republicans managed to pull even among 18-29 year olds, and that was in 2004, the Republicans’ best overall presidential-election performance in the last 27 years. Democrats have had a notable advantage among this demographic in the last 20 years, and its level of turnout in 2012 was no more impressive than its turnout level in 2004.

If the increased levels of turnout and Democratic support among black voters, Latino voters and young voters in 2008, and the additional increase among black voters in 2012, cannot be specifically attributed to President Obama personally, that’s troubling news for Republicans. Unless they can significantly increase their share of the white vote (already approaching 60 percent for the Republicans in 2012) and/or white turnout (64.1% in 2012), their success in 2016 depends on significant leakage of black, Latino and/or young voters from the Democratic Party, or the voter pool in general.

Elections guru Nate Silver, who accurately called all 50 states in the 2012 presidential election, and his team at FiveThirtyEight.com recently unveiled a tool called the “Swing-O-Matic.” This tool, taking into account the expected voting-age population of various racial demographic groups in 2016, allows users to adjust their turnout levels and voting behaviors to determine which states, along with their corresponding electoral votes, would swing from one party to the other based on those adjustments. (The tool does not provide methods for adjusting turnout or party support by age group.)

According to the Swing-O-Matic, if white turnout, and white support for the Republican Party, stay at 2012 levels (64.1 percent and approximately 59 percent, respectively), then black and Latino turnout, and their support for the Democratic Party, would have to approach 20-year lows for a Republican candidate to surpass the 270 electoral votes needed to win in 2016. Even a 20-year average performance among these two demographic groups would keep Democrats in control of the White House. With white turnout and white support for Republicans unchanged; Democrats getting 90 percent of the black vote at a 60 percent turnout rate; and Democrats getting 66 percent of the Latino vote at a 47 percent turnout rate, only Florida would flip from the Democratic column into the Republican one in 2016, leaving the Democrats at 303 electoral votes, or 33 more than needed to win.

In short, if the so-called “Obama Coalition” is really just the “Democratic Coalition,” and the increased participation of its constituent groups is happening independently of President Obama, then Republicans are going to need unprecedented levels of support from white voters to prevail in 2016. 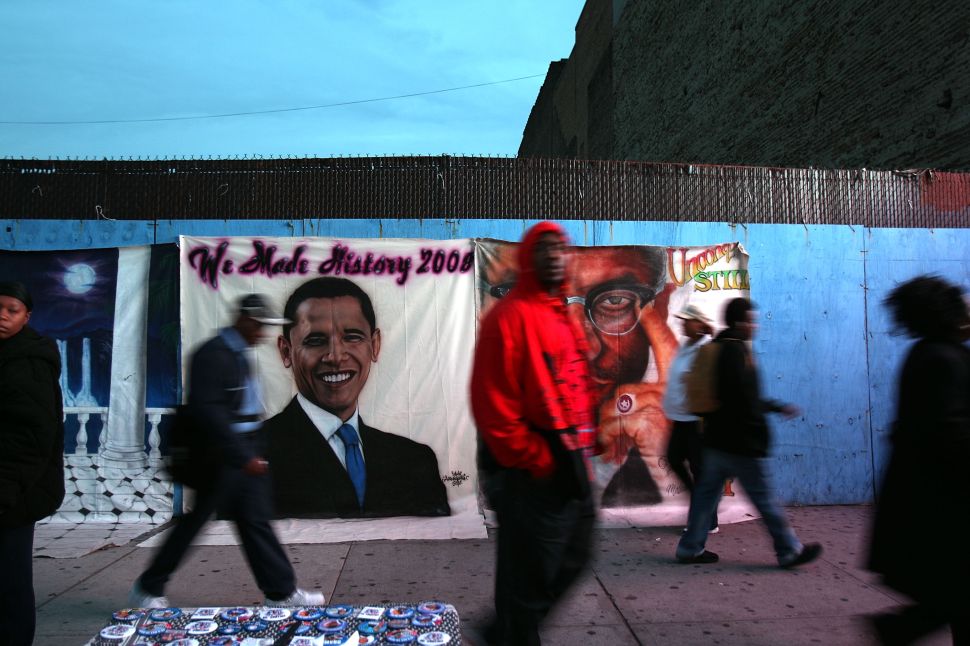