I had a mentor who was committed, for the sake of others, to my moral being. He was four-star General H. Norman Schwarzkopf, who, following his victory in Desert Storm, was known to an admiring world as The Bear.

In 1966, jobs were plentiful, The Sound of Music won Best Picture, the Beatles ruled radio, college cost $200 a year, a big-block Corvette Stingray was a daylight robbery at $5300, the national debt was 3% of today’s, and Boomers were pushing sex, drugs, and rock and roll.

I was at monastic West Point when we heard of a highly-decorated and scary new professor who’d been wounded in distant Vietnam. Sensing he’d land with the compassion of a tornado in a trailer park, those of us with low engineering grades began praying to avoid him.

No one achieves character without hardship; this was as easy as a self-inflicted root canal.

“Section, Ten-HUT!” A tall, hard, wide-shouldered, bear-like officer entered our 12-man bottom-scraping section. He had short-cropped light-colored hair, a deep tropical tan, and wore every medal we admired. He’d absorbed the sun and blotted it out. He was that guy.

“You are lazy, gutless wonders! Why are you down here?!” His anger was like a sharp right cross to the head. It quickly passed: I was a junior who was proficient in English, poker, the weight room and pranks, and was therefore logically full of myself. But my radiant indifference was a fly in the Bear’s ointment. He ordered me to report to him for correction.

He wore gray Academy sweats. Big forearms, a watch on each wrist, writing left-handed at a desk for smaller humans in tiny quarters filled with thick books written for big brains. A miniature fan riffled ranks of thumb-tacked notes on an organized bulletin board.

He opened with gentle banter: “Why don’t you study?” “What’d you learn from your dad?” “You’d hate to fail so why don’t you work on succeeding?” “You know the Harder Right – why not do it?” My puny excuses seemed to be making him physically ill. He coughed.

“Do me a favor. Tell me only one thing: the unvarnished truth.”

“I just try to get by,” I confessed, “without being noticed” – an unlikely result for one of five Asians among 4,000 Anglo cadets and faculty – and for the one Asian who was bad in math.

So the Bear breezily tutored me from an “F” in mechanical engineering to a “B.”

But he wasn’t after grades. He had learned a counterintuitive truth in war that he began to pour into me: that the romantic and moral action – West Point’s famous Harder Right – was shockingly also the most practical course of action. I tried to squirm away; he pursued my good character like Grant had relentlessly chased another Mr. Lee during the Overland Campaign.

He had me practice what I feared: honor people I dislike; take responsibility without excuses, gossip or blame; speak truth to tough bosses; fearlessly correct wrongs; and act calmly in the face of stress.

The Bear showed me what we’d need in war and peace, in work, dating, marriage and parenting: how to make a mushy wishbone into a backbone and how to grow a pain-avoidant male into a courageous and trustworthy man of the Harder Right. He got me to box in that rarified moral space where the Cheap Me battled my Better Self.

He had me practice what I feared: honor people I dislike; take responsibility without excuses, gossip or blame; speak truth to tough bosses; fearlessly correct wrongs; and act calmly in the face of stress without anger or seeking the approval of others. No one achieves character without hardship; this was as easy as a self-inflicted root canal.

After retirement, the Bear declined wealth and power to support ailing children and the environment. We worked together in a start-up; he helped me with leadership development and supported my writing. After 47 years of moral comradeship, 78-year old General H. Norman Schwarzkopf passed away shortly after Christmas in 2012.

I still hear his gruff voice: cowardice makes misery; moral courage makes happiness; the romantic and moral act is the most practical; and place faith in something nobler than our egos and appetite for wealth and power.

His mentoring changed my life, shaped my work in ethics and character-based leader development, and helped uplift my marriage and the lives of our children.

For I had a mentor who was committed, for the sake of others, to my moral being.

Author Gus Lee’s just-released, With Schwarzkopf: Life Lessons of the Bear recounts how his mentor altered the course of his life and the life of his family. 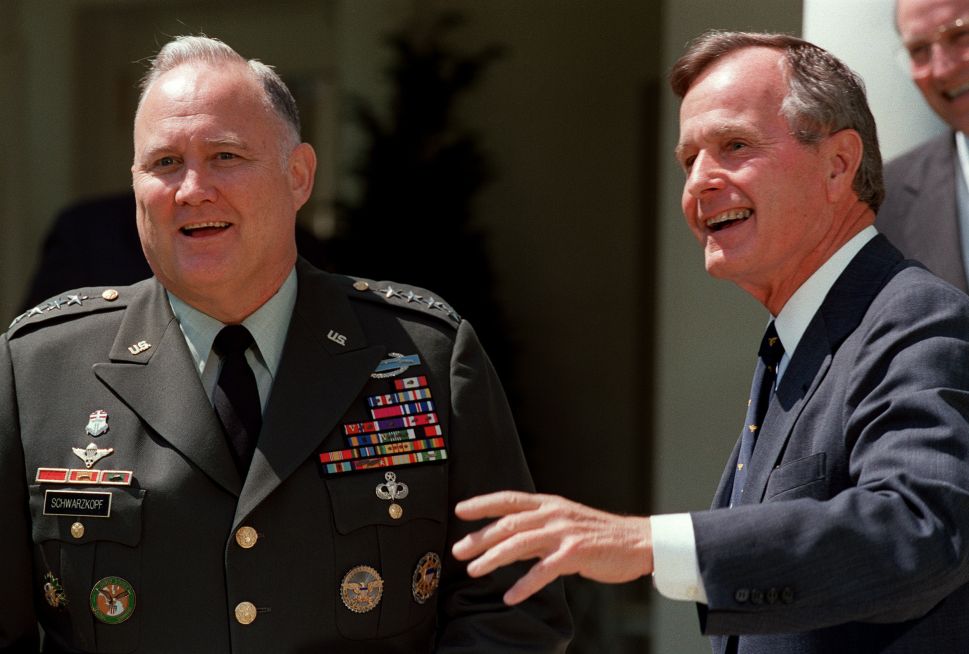