The downing of a Russian Su-24 bomber jet on November 24 by a Turkish F-16 fighter on the Turkish-Syrian border, where the two air forces have been playing high-speed cat-and-mouse games for months, opened a new and dangerous phase in an international crisis that’s long been brewing on low-boil.

Although President Recep Erdoğan’s Turkey and President Vladimir Putin’s Russia are ancestral foes, in recent years the countries had enjoyed a cordial relationship with substantial trade between them and significant alignments on many security issues, notwithstanding the former’s NATO membership going back to the early Cold War. As the Middle East has gone up in flames since the Arab Spring, a Russo-Turkish partnership might have gone a long way in preventing wider conflagration.

Alas, any regional cooperation between Ankara and Moscow has broken up on Syrian rocks, with the two countries pursuing contrary goals in that sad country, which has experienced the torments of hell since its civil war began in spring 2011. While Mr. Putin has backed its proxy—the Assad dictatorship in Damascus—to the hilt, Mr. Erdoğan has quietly supported anti-Assad guerrilla groups with equal determination.

Overt Russian military intervention in the Syrian conflict in late September placed Moscow and Ankara on a collision course, as was obvious to clear-eyed observers. For Turkey, exerting some control over neighboring Syria, particularly its war-torn north, is a vital national security interest, and Ankara made clear it did not appreciate Russian games there. Here, Mr. Putin’s customary bull-in-china-shop methods in international relations were destined to result in a clash.

All that can be said for certain is that a Turkish Air Force F-16 shot down the Russian Air Force Su-24 a little over a week ago, killing the pilot and wounding the second crewman; another Russian serviceman was killed by Syrian rebels during search and rescue efforts. Ankara claims that the Russians briefly entered their airspace, something that Moscow vehemently denies. Similarly, Turkish assertions that they gave the wayward bomber multiple warnings have been dismissed as lies—after-the-fact excuses—by the Russian defense ministry.

The Pentagon has affirmed the Turkish narrative, broadly speaking, yet it’s evident that the Obama administration is displeased with Ankara over the shoot-down. It’s not normal for NATO fighters to open fire out of the blue at intruding Russian military aircraft, something which has been happening with mounting frequency of late. Instead, NATO fighters are supposed to intercept the intruder, making mutual visual sightings, at which point the Russians usually head the other way. None of that seems to have happened on November 24.

It’s not every day you get to see leaders of major countries with large militaries acting like petulant teenagers on the world stage.

In fairness to the Turks, the Russian Air Force had been playing dangerous games in that border region for weeks leading up to the incident, bombing the locals, who are backed by Ankara, and goading the Turks into action. In addition, the Su-24 is frequently used for electronic warfare missions, so it cannot be ruled out that the Russians were jamming or spoofing frequencies in the area, causing confusion on the Turkish side—a deadly confusion, as it turned out.

This is where a dispassionate international investigation would help to defuse tensions, but it’s unlikely either side will support that. As with the shoot-down of Malaysian Airlines 17 over eastern Ukraine in July 2014, almost certainly by Russian-controlled forces, the Kremlin has responded to this incident with barrages of propaganda, some plausible, some downright absurd.

Some of this has come directly from Mr. Putin himself, who publicly accused Mr. Erdoğan of supporting the Islamic State, the notorious ISIS, including personal profiteering off the illegal sale of ISIS oil through Turkey. Adding fuel to the fire, Moscow sources have asserted that the shoot-down, which was “really” done to protect the “secret” of illicit ISIS oil shipments through Turkey, was done with the personal approval of President Obama. This is more of the noxious Kremlin agitprop that this White House bizarrely has chosen to do nothing to counter, as I recently explained.

Inconveniently for Ankara, at least some of Putin’s accusations are true. Although only Kremlin Trolls believe Mr. Obama had anything to do with the shoot-down, clandestine Turkish support for ISIS in the Syrian war isn’t a figment of Moscow’s imagination. Reports of oil profiteering in Ankara, including from ISIS, have circulated widely among Western intelligence agencies in recent years, while Mr. Erdoğan’s personal corruption is well known.

However, Russian accusations against Turkey ultimately fall flat, not least because Western intelligence has also reported about Russian profiteering from illegal ISIS oil sales, while questionable Kremlin spy games with various jihadists over the years, including Al-Qa’ida, are a matter of record. While Mr. Putin’s inflammatory accusations are not wholly fabricated, his own regime has done much the same.

Ankara has reacted to all this in an equally juvenile fashion. Mr. Putin’s allegations of profiteering have resulted in Mr. Erdoğan stating he will resign if the ISIS oil story proves true, while demanding that Mr. Putin resign if not. It’s not every day you get to see the leaders of major countries with large militaries acting like petulant teenagers on the world stage.

Neither country shows any desire to step back from confrontation, which ought to alarm everyone.

Russia and Ankara have shifted more military forces to the Syrian tinderbox—the former has moved in cutting-edge S-400 air defense missiles while the latter has deployed brigade’s worth of tanks to the border—which does nothing to stifle the crisis. Moscow’s aggressive trade sanctions against Turkey over the shoot-down will cause pain to both countries, while demonstrating that this incident will not be allowed to go away by the Kremlin.

Mr. Erdoğan’s suggestion of a meeting between the leaders to resolve the crisis was rudely dismissed by Moscow, leading to the Turkish prime minister stating his country will never apologize for defending their sovereignty. At the moment, neither country shows any desire to step back from confrontation, which ought to alarm everyone.

No small part of this mess has been caused by the essential similarities of both leaders. Mr. Putin and Mr. Erdoğan are charismatic strongmen with deep nationalist credentials. They have successfully employed faith mixed with chauvinism to handsome political effect, including nostalgia for lost imperial glory that rankles and scares their neighbors. They are popular with many citizens, who credit them with big economic advances among average people. Their political foes have fled the country in fear, while dissenting journalists and activists get arrested or killed in “mysterious,” never-solved crimes. Above all, they have used quasi-democratic ends to establish very un-democratic regimes, personally profiting in the process. Neither man has any history of backing down in the hour of crisis.

If all this sounds alarming, it should. It ought to be noted that neither Mr. Putin nor Mr. Erdoğan has crossed the point of no return yet: for the former, that would be cutting off Turkey’s natural gas shipments as winter sets in, while for the latter the shutting of the Bophorus to Russian ships, as it is permitted under the Montreux Convention of 1936, would have a similar effect, i.e. tantamount to a declaration of war. However, the lack of any signs of crisis de-escalation yet ought to raise concerns.

Moscow must understand it cannot bully a NATO member without consequences.

In Mr. Erdoğan, Mr. Putin has encountered a foe whose congenital response to the Kremlin strongman’s usual foreign policy playbook of tantrums and threats will be pushback rather than backing down. This matters because Turkey is a key member of NATO and it possesses a large and competent military—though it lacks the several thousand nuclear weapons Mr. Putin controls. Alarming signs are not difficult to detect. Demands in Moscow that Turkey return Hagia Sophia to the Orthodox Church, which fell to the Ottomans in 1453 when Constantinople—now Istanbul—at last was taken by the Turks after centuries of effort, are sure to inflame passions among history-minded Turks of an Islamist bent like Mr. Erdoğan.

Falling back on militant faith and historical grievance in a crisis is seldom an encouraging sign, and NATO needs to make it abundantly clear to Ankara that Article 5, the Alliance’s collective defense clause, does not apply if Turkey goads Russia into an avoidable war. That said, Moscow must understand that it cannot bully a NATO member without consequences either.

If all this—nationalist passions, dangerous border games, entangling alliances—sounds worryingly similar to 1914, it’s not altogether wide of the mark. As a historian I try to avoid bad analogies, which can be hazardous, but there are parallels with the disaster that befell Europe after the assassination of Archduke Franz Ferdinand in Sarajevo. Then, as now, an aggressive Russia backed a troublesome proxy—then Serbia, now Syria—into an avoidable confrontation with a bigger neighbor, which led to a wider and unimaginably terrible war.

For decades it was fashionable to view the coming of World War I as some sort of unfortunate misunderstanding, which historically speaking is utter nonsense. In truth, both Vienna and Russia consciously opted for war, knowing full well that the outcome would be a major conflict: one that neither regime would survive, as it turned out. As I explain in my just-released book Fall of the Double Eagle, which details that fateful July and its awful outcome, sometimes political and military leaders, smart and educated people, do insanely stupid things, with horrific consequences for millions.

We can hope that Mr. Putin and Mr. Erdoğan, understanding what war—especially possible nuclear war—would mean, are more cautious than the leaders of 1914 were. At this hour, Mr. Obama is attempting to mediate this crisis before it gets out of hand, urging Turkey to step back a bit, and we should all wish him well, although there is reason to doubt Ankara takes Mr. Obama very seriously, given his dismal track record in the region. Whether reason prevails over passion in this hazardous misunderstanding between Russia and Turkey, who have waged numerous wars against each other over the centuries, remains to be seen. 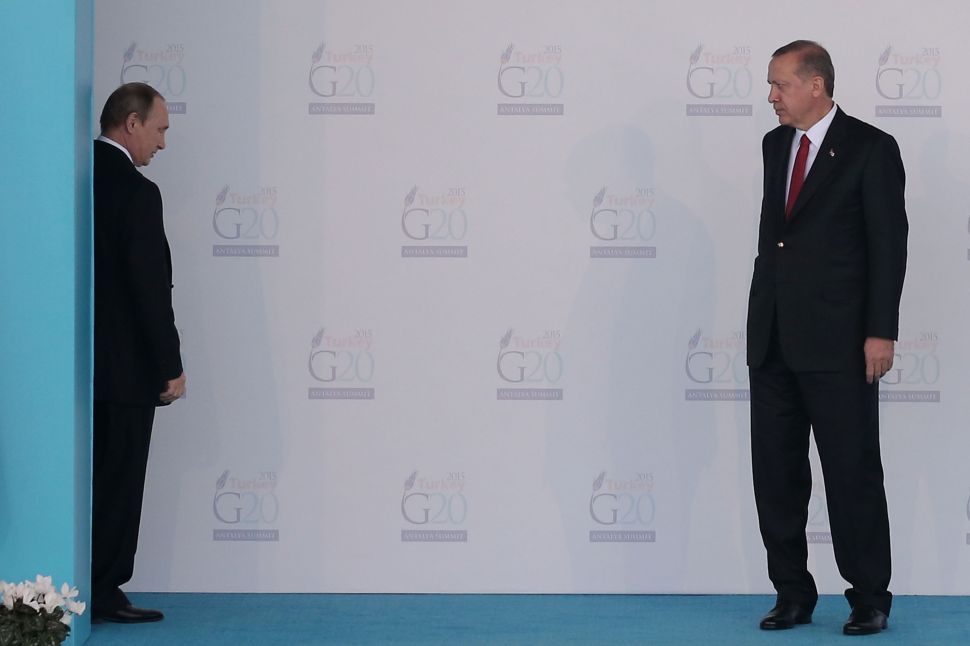