Following the release last week of a proposal to amend the state constitution and allow gaming outside of Atlantic City, Assemblyman Chris Brown (R-2) lashed out at Senator Jim Whelan (D-2) in a public letter asking that Whelan refuse to post the bill as chair of the Senate State Government, Wagering, Tourism, and Historic Preservation Committee committee.

In a letter posted to his Facebook page Friday (with “Jim” written in by hand over a crossed-out “Mr. Chairman”), Brown addressed Whelan as the one legislator who could single-handedly stop North Jersey casinos. Whelan called the suggestion “ridiculous” in a written response to Brown.

Whelan’s ties to Assemblyman Vince Mazzeo (D-2) and their mutual role in sponsoring Atlantic City casinos’ benighted PILOT bill put him in Brown’s crosshairs more than once during the 2015 Assembly elections, and this off-season attack could be an early sign that Brown has his eye on Whelan’s Senate seat in 2017.

“You have the ability to stop the push for North Jersey casinos. Given your good relationship with Senate President Sweeney, he would certainly refer such a concurrent resolution to your committee,” read Brown’s letter. “I am asking you to exercise your as chairman to kill the North Jersey casino proposal on behalf of the hard working families in Atlantic County.”

The proposal, however, was not referred to Whelan’s committee, landing instead with the Senate Budget and Appropriations Committee. After he posted the letter, the Press of Atlantic City reported that Brown called the resolution’s landing in a committee chaired by North Jersey casino supporter Paul Sarlo (D-36) instead of Whelan’s a “charade.”

“I’d love to be wrong about this, but I believe the question of North Jersey casinos will be on the ballot in November 2016,” said Whelan in his response to Brown.

“[To] suggest that we can stop this by having Senate President Sweeney assign a piece of legislation that he is sponsoring to a committee where the chairman would not post nor support the bill is ridiculous.

“Equally ridiculous is the notion that we can stop this question by complaining about the procedural processes of the Legislature, so let’s stop posturing on this.”

Brown fought hard and held his own against massive campaign spending from super PACs and a flush Democratic majority this year, and it looks like the next year and a half won’t be bringing Atlantic City’s Democrats any rest. 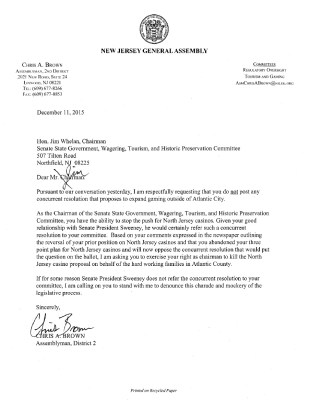 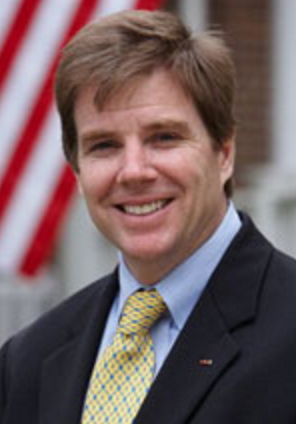