A couple of years ago while in Memphis, Tenn., Senior Vice President of the American Museum of Natural History Michael Novacek checked his email only to find an astounding photograph from his colleagues. Pictured was Diego Pol, an Argentinian paleontologist and alumnus of the joint American Museum of Natural History and Columbia University Ph.D. program, laying down on a dinosaur femur the size of a living room couch.

That bone is part of a 122-foot long, 17-foot tall dinosaur that has moved into the AMNH this week. Temporarily dubbed “the Titanosaur,” the specimen belongs to a completely unprecedented sauropod, whose structure and astounding size indicate the emergence of a new dinosaur species. A fiberglass model based on the dino’s remains will officially be revealed to the public on Friday at the AMNH Miriam and Ira D. Wallach Orientation Center. The creature’s new neighbor, a massive herbivore Barosaurus and also a sauropod, has resided there since 1996.

AMNH President Ellen V. Futter recently described the Titanosaur as the museum’s newest icon, a destination and touchstone, adding that its unveiling is part of a series of events leading to the Museum’s spring exhibition “Dinosaurs Among Us.”

Discovered two years ago in Argentine Patagonia by the Museo Paleontológico Egidio Feruglio, the beast extends 30 feet longer than the museum’s famous 94-foot model of a blue whale, and hardly fits inside the gallery’s rather roomy confines. Its head, suspended at 9.5 feet above the ground peeks out from the dark room, as if to greet visitors. Still, the Titanosaur is made of just 84 of the 223 fossil bones MEF paleontologists uncovered at the Argentine site. Among the artifacts belonging to six individual animals is an 8-foot thigh bone, a facsimile of which will be on display at the exhibit along with five other replicated finds.

The Titanosaur is thought to have weighed around 70 tons—a weight comparable to that of 10 African elephants. According to the museum, the creature could easily peek into a five-story building with its 39-foot-long neck extended upwards. Yet despite its colossal size, the Titanosaur was only an “adolescent” when it perished, probably near an ephemeral lake. According to AMNH’s Macaulay Curator and Chair of the Division of Paleontology Mark Norell there are several ways to tell if a dinosaur—and many other animals for that matter—are “somatically mature,” which in layman’s terms means growing a lot.

“One of those ways is that in some of the bones in the vertebrae in the neck and body elements is that those are composed of different sutures or connections between them,” Mr. Norell explained during the panel. “When an animal quits growing, those become fused and that’s an indication that the animal has quit getting bigger.”

Mr. Novacek noted that paleontologists have only just begun to discover such incredibly massive creatures as the Titanosaur, even after collecting dinosaurs since at least the nineteenth century. Mr. Pol offered that for the longest time research had been focused exclusively on Europe and North America. “These creatures are unique to South America,” he said of the larger breeds. “Regions that are much less explored … and they were the homes of these giants that roamed the earth 18 million years ago.”

According to Mr. Pol, sauropods found in South America are of the most diverse ever discovered, particularly in terms of size.

And while dinosaurs have, in rare circumstances, been found vaguely intact on digs in the Gobi Desert, such was not the case with Titanosaur’s bones, which were found among an accumulation of others.

“It wasn’t all just laid out beautifully in a perfect skeleton,” he explained. “It was just a big mélange of different bones that then had to be put together.” 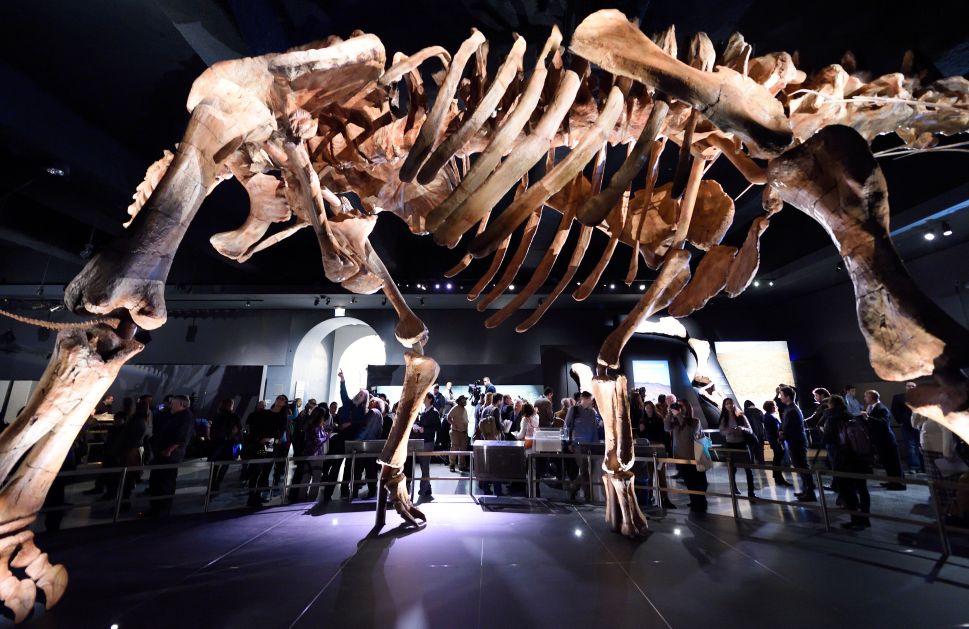