The announcement out of Florida that Jeb Bush would be running for president all but finished Chris Christie among that set of bar stool establishment Republicans in New Jersey who keenly respect that nexus of money and influence in American politics.

Like the bug planet bad guys in Starship Troopers, Jeb would suck Christie dry, or so ran the conventional wisdom.

Jeb’s big brother, after all, made Christie. Put him in the U.S. Attorney’s Office. Those donors who made W. by extension made Christie and would deprive the guy who’s family didn’t arrive on the Mayflower of financial support in favor of the former president’s son and former president’s brother who clubbed a wicked overhand on poppy’s tennis court all those years ago.

If Christie couldn’t corral Kyrillos, how was he going to wrap his arms around Iowa?

Then there was the back chatter.

No one in the senate caucus, for example, was jumping up and down for Christie to run for president. Senator Kevin O’Toole (R-40) remained an avid Christie fan, but he was noticeably quiet about it. Yeah, there was Bridgegate obviously. But maybe it went all the way back to the 2013 election when state Senate Minority Leader Tom Kean (R-21) painstakingly recruited South Jersey candidates to run on the GOP slate – some impressive women, no less, brought in to blunt any female power Christie challenger State Senator Barbara Buono (D-18) could generate.

Christie didn’t seem to stick so much as a big toe into South Jersey for the GOP that year, as GN3 saddle tramps rode back into office unimpeded by the Christie wave. As Tom Kean, Jr. tried, in good faith, to put together a down ballot Republican revolution on the governor’s coattails, Christie followed the playbook of Kean’s father and (even more aggressively) romanced Democrats. Rather than boost no-name women Republicans in South Jersey, Christie serenaded the likes of Essex County Executive Joe DiVincenzo and state Senator Brian P. Stack (D-33) up north.

And of course, as we reported exhaustively then and in the aftermath, the governor and his team feverishly pursued the endorsement of Democratic mayors – guys in towns we’ve never heard of surfacing suddenly amid belching smoke stacks proclaiming Christie the indispensable man.

All of that appeared to boomerang on Christie when, on the other side of the governor’s massive victory over Buono, he and O’Toole tried to offload Kean out of the minority leader seat  (Junior wouldn’t be a problem. Just run over him.) and ran up against a previously usually pliable caucus that didn’t comply. The Republican senators backed Kean, stood with him. Against the governor. It revealed very early pre-Bridgegate implosion fissures in the party; fissures that turned into post-GW Bridge fractures and appeared to strip the governor of that old reliable statewide trampoline called GOP love.

Then Bridgegate bombarded him.

Then – just as Christie on the heels of his administration-commissioned Mastro Report attempted to drive the absolution message and free himself from GWB entanglements – Bush got in the race.

“Game over,” a Democratic source from Hudson County told PolitickerNJ. “That’s the ballgame. Bush is your next president.”

The pol shared the assessment with all the enthusiasm of one prepared to go back to sleep for the next two years or more.

But Christie slogged through anyway amid murmurs of his immense self-belief, his unwilingness to be cowed, his blue collar appeal alongside an overgrown Little Lord Fauntleroy (Great – bring on Jeb, Christie will bully him. He’ll make Jebby boy cry. It wasn’t quite that bad, but there was the abiding recognition of Christie’s unmovable ego), his political skill, and of course, his titantic ambition.

Plus, Christie – ever the go-getter – had gone out and done what every smart politician does. A lesser talent would sit around bragging about how W. had made him U.S. Attorney then have a deer-in-the-headlights moment when confronted with Jeb. At the height of his powers, Christie set about building a national political operation as head of the Republican Governors Association. That’s the same job Bobby Jindal wanted and that Christie muscled.

Plus, Jeb was Romney, right?

Another uninteresting rich dude who would sooner write the sequel to King Lear on par with Shakespeare than connect with the average American voter.

He had backed Mitt.

Joe would always back the guy from central casting who excels in the boardroom of corporate America and makes great cocktail party company, and miss the populist. And, by God, it was time for a populist messenger in the Republican Party, or so ran the logic of that handful off Christie loyalists; and it was a handful.

How many YouTube hits had Jeb put together over the course of the last four years?

Had Jeb ever told anyone to get the hell off the beach?

Christie would be the next president in this environment, one last stand ally of the governor’s insisted in a conversation with PolitickerNJ. No, no, no, the vast majority of the New Jersey Republican Party confessed on condition of anonymity, Jeb was the guy. Too much money and influence.

No one here saw Donald Trump coming back then.

No one stopped to consider that if indeed the American angry male had reached his apotheosis, if – in the harshest of internal establishment diagnoses of the advanced public condition – Cro Magnon had devolved to Neanderthal and Neanderthal to Peking Man, and technology had progressed just as fast in the other direction, from newspapers to Twitter, and the abrogation of manners and good taste and the virtues of modesty and proportion at last received an improper burial at the hands of our constant, unrelenting and voracious streaming ego, then…

routinely calling people “loser,” bested “get the hell off the beach,”

and – in the flat plains of scared Middle America, wasn’t the guy who wanted to blockade the country off from intruders superior to someone who had nuanced views on immigration and campaigned for reelection with Democrats?

It turned out – and those same establishment types sedately eating steak now carefully shifted gears in their analysis – it wasn’t Bush who was the threat to Christie. It was Christie. Or rather it was Trump, who did Christie better than Christie.

The “Telling it like it is Tour” was the right idea. But it didn’t beat bread and circus’s and Ringling Brothers and 14 prime time seasons on network. How could 250 teary-eyed sit-downs with Neil Cavuto compete?

If Christie had a Star Trek geek-like fixation on The Boss, Trump was The Boss.

New Jersey attitude, and this may have been the most painful revelation of all, didn’t beat an activated Big Apple.

No, it was too difficult a confession.

But all these months later watching Trump onstage standing with the scars of 911 around him, rising like holograms of pure energy in the face of Ted Cruz’s values attack, even produced a strange sort of Nixon in China moment; as though only the Republican front-runner for the presidency dragging a million accusations of nativism could finally, back against the wall, stand up for New York in the middle of an Iowa cornfield.

And then turn around and insist on a Muslim ban.

That was a feat Rudy Giuliani couldn’t pull off in 2008.

Just couldn’t do it.

But Christie, getting back to his earliest days on the trail, looked like the purveyor of a DOA campaign in the summertime when he kicked off in Livingston. That Asbury Park boardwalk event felt stilted. Mood wrong. One could picture Jerry Lewis walking out on stage and calling for sexy lights. Something. Anything. Whatever it took to create a more electric atmosphere. There were bodies in Convention Hall. But they didn’t look like people who believed they were going to the White House. There was a lesson there, the most zen-like observers sought to impart. Yes,one needs ego in politics. But too much ego causes people to do foolish things, like run for president long after their due date, which, as every expert delighted in repeating and repeating, in Christie’s case had been 2012.

About a month later, the former Florida senator confidently, tan and tall with an accessible southern twang in his voice showed up at a Monmouth County country club looking different from the discarded hay bale prop he would transform into over the coming months. The scion of a great political family (Democrats can insert laugh track here, but the Bushes did create two presidents) Bush would turn into a pumpkin, almost literally, over the course of the next six months.

“Things happen in threes,” said one astute analyst of the situation, referring to George Herbert Walker, W., and now Jeb.

And yet Christie, written off as a Bush casualty, would show all those considerable and well honed political qualities to fight through the skeptical and hate-tinged and jealous din, to put forward a credible if doomed campaign effort with Bush shrinking inch by inch like the characters in The Fantastic Voyage and Trump climbing, hand over hand, up the sheer surface of the Empire State Building above the dismally scrapping crowd of bunched-up rivals.

Jindal – a governor with a successful record – was supposed to threaten.

Scott Walker – a populist-acting governor with a Christie-like record of axing public sector unions and no Bridgegate encumbrances – should have been a big headache. Maybe the flanking movement with Bush to finish Christie early.

What can one say about him?

Meanwhile the Democratic establishment in New Jersey – on lock-down for Hillary Clinton – high-fived with abandon, popping popcorn, racing home early to watch those nightly scheduled Fox and CNN train wrecks featuring unelectable Republicans (and Christie, who, they knew, could be a problem if he got through the primary, but he wouldn’t), delighting in how incredibly daft Republicans had been not to see Trump sneaking up on the party, eager to discuss how reduced the GOP had become and narrow and unseeing and ill-suited…

“Could we,” a veteran Democratic source texted PolitickerNJ a half an hour ago, “really have a Trump v. Sanders election?”

Full disclosure: Donald Trump is the father-in-law of Jared Kushner, who is the publisher of the New York Observer, which owns PolitickerNJ. 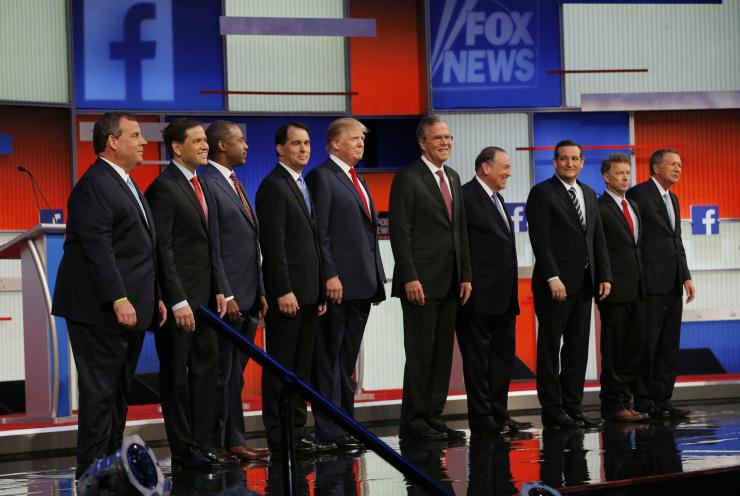