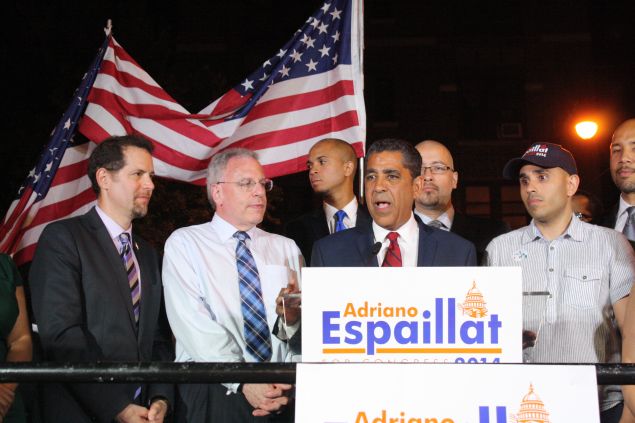 It’ll cost you way more than $10 if you want to see the “ten dollar Founding Father.” That is, if you can even get a ticket.

But for those in need of a way to see the Broadway smash-hit Hamilton, all it takes is a donation to the congressional campaign for State Senator Adriano Espaillat. Give Mr. Espaillat $1,500 and receive one ticket, according to a fundraising email obtained by the Observer. Give $2,700 and receive two.

“Get the most exclusive ticket in New York City today! And show your support for Adriano Espaillat for Congress,” the invitation reads. The tickets are for three shows on January 28, January 30 and February 19.

Hamilton, a wildly popular hip-hop musical, tells the story of Alexander Hamilton, a legendary Founding Father and New Yorker. The show’s composer, Lin-Manuel Miranda, is from Mr. Espaillat’s Inwood neighborhood and is the son of his longtime consultant, Luis Miranda of the MirRam Group. Mr. Miranda, the composer, was the master of ceremonies for Council Speaker Melissa Mark-Viverito’s inauguration, not long before Ms. Mark-Viverito would endorse Mr. Espaillat’s second bid for Congress in 2014.

Mr. Espaillat is now running for Congress a third time against a crowded field of fellow Democrats for a seat that spans upper Manhattan and the Bronx. The Democrats are all vying to replace Congressman Charles Rangel, who has said he will retire at the end of this year.

The primary will be held June 28.