You know when you go to Chuck E Cheese to get wasted on $3 glasses of tap-wine because you don’t technically have to tip there, but you end up spending your entire SomeECards internship stipend because you have no self control, and then when it comes time to eat you have to buy groceries instead of ordering from Seamless so you go to the weird Greenpoint Ukrainian dollar store instead of Whole Foods and instead of getting Annie’s Homegrown Nine Dollar Mac and Cheese you have to buy something called Олександра’s Devastating Twenty Nine Cent Turnip Brine of the Blighted Dead? That can happen with television, too.

Let me back up. For the last few weeks everyone has been talking about Making a Murderer. I log into Facebook and everyone is Making a Murderer this, Making a Murderer that. Twitter, Instagram, Tinder same thing. I’m trying to write this article right now and a little animated paper clip keeps popping up and asking to show me a PowerPoint presentation on why Steven Avery couldn’t have possibly killed his fam or whatever. Well squad, I have no idea what anyone is talking about. When you guys talk about this show my eyes glaze over like I’m listening to Marc Maron narrate the audio version of Infinite Jest. I don’t know what anyone is talking about because my Netflix is out this month. I’m out of money because I ran out of people willing to buy my used socks on the internet and I ran out of opportunities to write Vice articles about how I sell my socks on the internet. Times are tough, but that doesn’t mean you can’t have a social life. If you can’t afford to watch Making a Murderer, do what I did, watch a bunch of old DVDs of The Andy Griffith Show instead and just fire back plot points from it whenever people bring up Steven Avery. No one will be the wiser and you’ll save yourself nine bucks or whatever the hell Netflix actually costs.

Check it out: The show stars Andy Griffith as this sheriff whose wife is dead, so right there, you know, there’s that. Andy maintains order around the quiet unsuspecting mountain town of Mayberry NC. He’s like nine feet tall and he’s got a face like he smokes Parliament full flavors two at a time with the filters cut off. Really, his face looks like you beat a pumpkin with a Tom’s shoe. Google the guy’s face and you’ll see what I mean. He looks really cool and dapper in all the black and white photos but when you see him in color all of the sudden you’d think you were staring at a talking Slipknot mask. I’d bet this guy’s Tinder profile is all black and white duck face photos and then when you end up meeting him at a Denny’s he shows up looking like Iggy Pop with a CVS manager’s haircut. I guess this aired during a time all television was presented through the Inkwell IG filter and people watched programs that weren’t about people trying to lose weight so they could run through an obstacle course. History is crazy.

Next you’ve got this this kid named Opie a.k.a. Yung Trump who get’s into all kinds of crazy shit with his OG Aunt Bee. Opie looks like what happens when you create a Fallout character and just use the default settings. He’s a pale red haired robot that occasionally hits baseballs through windows and pushes a hoop down a dirt road with a stick. He kind of looks like a Banksy cartoon without the giant lollipop that’s in the shape of a huge prozac or whatever, JUST the plain looking child part. AGS was on the air for eight seasons so I’m assuming this child actor grew up to be a Skid Row smack whore or a Randy Quaid or something.

Now while Andy’s not chilling with the fam or running around committing hate crimes and planting evidence on people he’s working with this Adam Driver looking fuccboi named Barney Fife who sort of talks like someone sat on the controls during an autotuning session of a John Darnielle track. He’s a sheriff’s deputy who serves to complicate the plot by mishandling evidence and firearms. Fife spends a lot of screentime Darren Wilson-ing his gun off at scarecrows and sitting on pies and things like that. If you’re at a party and everyone starts talking about Making a Murderer and how they ignored DNA evidence or lost a ballistics analysis or what have you, just start describing a Barney Fife plot without mentioning his name and you’ll fit seamlessly into the conversation. For example: “Ohhh yes, when the officer accidentally handcuffed himself to the carousel at the county fair I was like ‘the justice system is broken’ ” or “can you believe that one key witness went as far as to dress up as a woman in order to invite Steven Avery to the Sadie Hawkins dance? Disgusting.”

Anyways everyone else in this show looks exactly like Rand Paul and open carries like they’re trying to get booked on the Blue Collar Comedy Tour. The Andy Griffith show really harkens back to a simpler time in America when everyone was white because there was a giant wall around North Carolina or something? Guys I really need to see Making A Murderer, I can’t take any more of The Andy Griffith Show. I’m starting to find guns funny and family important. Oh my god I’m 29 and I’ve become Ammond Bundy. Please send snacks. 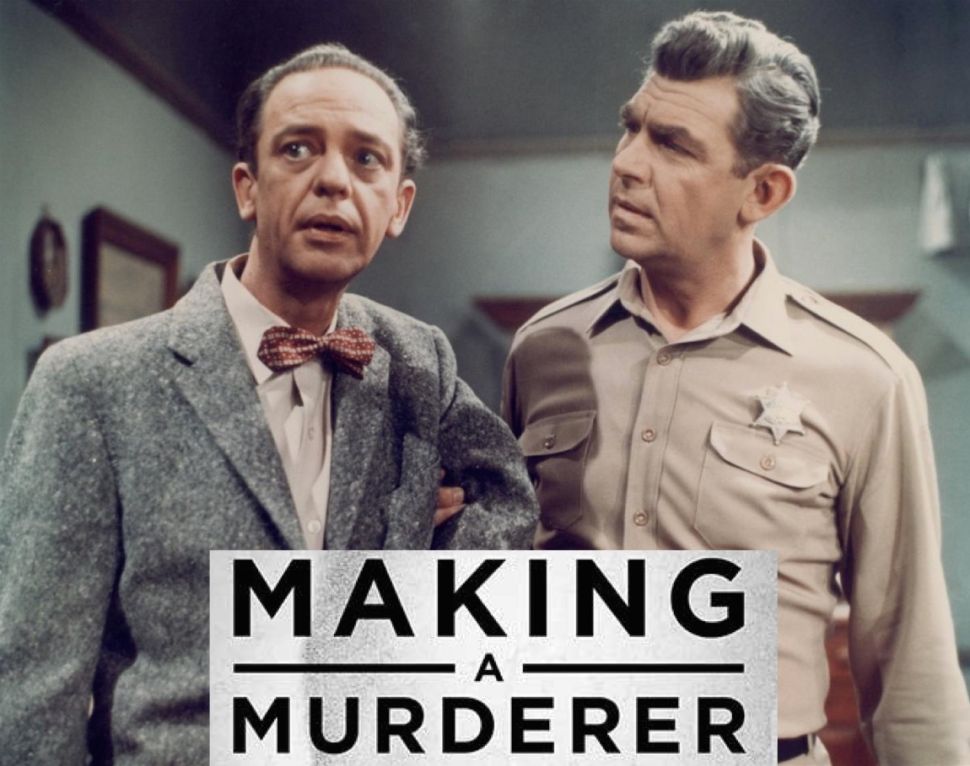