Saying only that the Assembly Human Services, Housing and Economic and Development, Women and Children, and Transportation and Independent Authorities committees will meet on January 27 to receive testimony on anti-poverty measures, details were scant as Prieto offered a list of topics rather than a list of bills. Transportation infrastructure, food assistance and housing assistance will continue to be the focuses of the initiative.

“We live in a state where the richest 20 percent hold half of all the income,” said Prieto. “We applaud and welcome such success, but such inequality is concerning, both when it comes to sound fiscal and smart social policy. We must rebuild the middle-class and make New Jersey more affordable with common sense 21st century ideas and government reforms.

“I’ll keep this simple – we should be embarrassed that so many of our fellow New Jerseyans – our friends, our neighbors, our own family members – are living in poverty in 2016. It is not acceptable. We must rebuild our middle-class.”

“Republicans look forward to joining that discussion, and we should also address high property taxes to help the middle class,” Bramnick said in an emailed statement.  “For too long middle-class homeowners have struggled living in this state.  To get New Jersey’s property taxes under control we need to make this our top priority this session.”

Prieto lost ground to Sweeney on entitlements for Atlantic City bidders earlier this month, and an unexpected veto of an aid package for Atlantic City could signal that Sweeney’s takeover effort has the lion’s share of legislative support against Guardian. Prieto had met with Guardian earlier Wednesday morning to discuss the possibility of a municipal bankruptcy, a meeting where he said he wouldn’t rule out seeking amendments to Sweeney’s takeover bill or posting a competing bill of his own.

While Guardian is saying that the city may file soon, Sweeney changed gears earlier this week in saying he would oppose the move in favor of his own takeover bill. The key bill in the vetoed rescue package would have allowed payment in lieu of taxes for Atlantic City casinos, a decision that leaves the city with a $33.5 million budget shortfall on top of the $160 million it owes in tax appeals to the Borgata, the most profitable of its remaining casinos.

On a municipal bankruptcy for the impoverished gaming capitol, Prieto said that all parties in the legislature, himself included, are hoping to avoid such a drastic step.

“I don’t think that’s something anyone is looking to do,” said Prieto said of the intricacies involved in declaring and managing a bankruptcy.

“I think Donald Trump is the one who’s good at it,” he added.

Citing the numerous improvements that had been made to the bill in committee and as a result of Christie’s original veto, Prieto said that he, like the rest of the legislature, doesn’t know why Governor Chris Christie chose to veto the PILOT bill. Kevin Roberts, Director of Communications for the governor’s office, shot back in a statement after the announcement.

“The Governor did not sign the PILOT legislation for one simple reason:  Atlantic City government has been given over five years and two city administrations to deal with its structural budget issues and excessive spending. It has not. The Governor is not going to ask the taxpayers to continue to be enablers in this waste and abuse.

“The Speaker is well aware of these facts, as the Governor has discussed it with him repeatedly. There is no mystery.  It’s that simple,” Roberts wrote.

Prieto, for his part, said that he and Christie have been in talks over the details of any future takeover.

Asked about his working relationship with Sweeney since the casino blowout, Prieto said that it was under the bridge.

“I always do the job at hand. For me it is about the people of the state of New Jersey, it’s never about Vinny Prieto. It’s always about doing the right thing.” 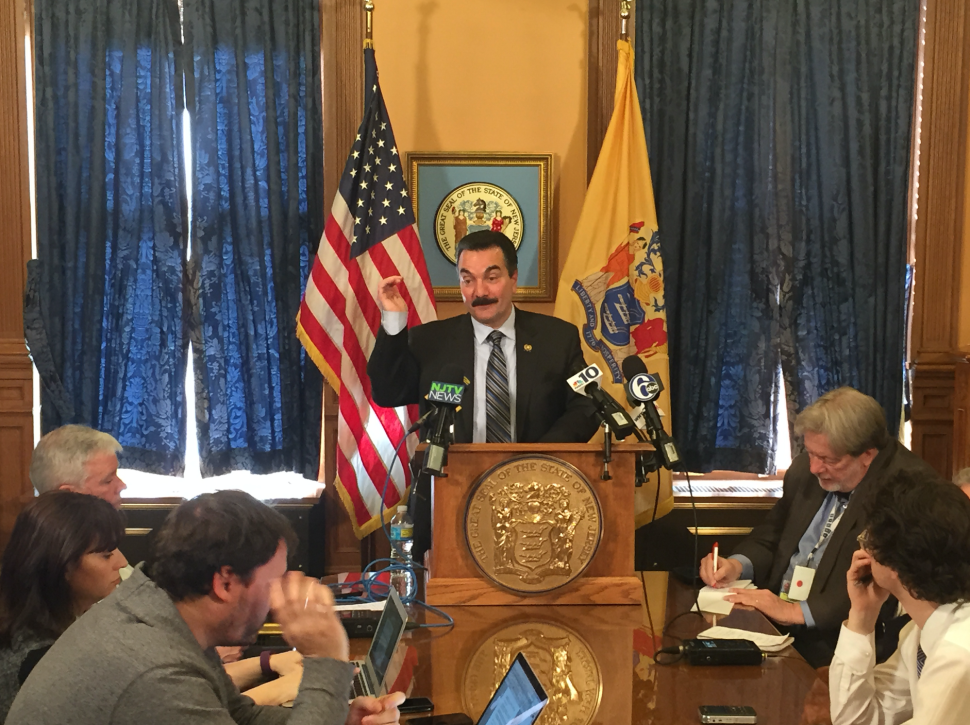