It’s known as “Old Jeff,” a building distinguished by a grand tower and four-faced clock. Hard to miss anywhere you stand in Greenwich Village, its 100-foot tower rises prominently from the corner of Sixth Avenue and West 10th Street. Architects Frederick Clarke Withers and Calvert Vaux (one of the designers behind Central Park) designed the Victorian-style building, dubbed the Jefferson Market Courthouse, between 1874 and 1877 with red brick and limestone, arched windows and a tower with a fire-watchers balcony that commanded uninterrupted views of the Village. The design was so successful that an 1880s poll voted the building the fifth most beautiful in the country.

The façade, after years of restoration in the early 2000s, looks perfectly preserved from 1877—even the bell that once summoned volunteer firemen still hangs in the tower. But the interior has strayed far from its original purpose. The courthouse closed in 1945. The Police Academy, rumored to have used the building for riot training, moved in and stayed until 1958. After the academy’s departure, it sat empty until its conversion to a New York Public Library branch, which opened in 1967 and still operates today.

Before adaptive reuse, “New Yorkers didn’t consider buildings in the city as a part of history…they were thought of as utilitarian. And there wasn’t really the technology to restore them.’—Alex Herrera, a director at the New York Landmarks Conservancy.

Old Jeff’s history of adaptive reuse—keeping the building but changing its function—is likely considered old hat by now. This is a city that converts manufacturing warehouses to loft apartments, churches into condos, and abandoned rail lines into world-class parks. But in the early 1960s, in the effort to find a brand new use for the former courthouse, “People were weirded out by the idea,” said Simeon Bankoff, executive director of the Historic Districts Council.

“At the time, it was a really interesting idea to radically change the function of the building,” he said. Although reusing old buildings was hardly a revolutionary concept, buildings were historically repurposed for uses compatible with the original form—a church becomes a synagogue, for example. The idea of carving a library out of a courthouse was another matter. “People were asking where you’d put the books,” said Mr. Bankoff.

The library plan was championed by Village residents, led by preservationist Margot Gayle, who also needed to prove the building could have a new use at a time when demolition was the norm. (The city was considering tearing down the abandoned eyesore to replace it with an apartment building.) This was before the landmarks law. “Previously, New Yorkers didn’t consider buildings in the city as a part of history…they were thought of as utilitarian,” said Alex Herrera, a director at the New York Landmarks Conservancy. “And there wasn’t really the technology to restore them.”

The ’60s changed that—preservation battles around the highways proposed by Robert Moses and the demolition of Penn Station got New Yorkers thinking about what they wanted to save. And the Old Jeff proposal was at the forefront: When Mayor Robert Wagner announced the building would be preserved and converted into a public library in 1961, it was considered one of the first adaptive reuse projects in the country.

The Jefferson Market Library ultimately set the stage for more creative and unexpected adaptive reuse projects, and adaptive reuse would emerge as a major force in the modern real estate market. “Adaptive reuse is here to stay,” said Mr. Herrera. “Now, any architect worth his salt has a few of these projects.”

Indeed, building restoration technology has gradually improved (with the help of European immigrants arriving in the 1970s who knew how to restore buildings, according to Mr. Herrera) and many prominent architecture firms have since embraced the preservation ethos. “I think architects were beaten into doing it,” said Stanton Eckstut, principal at architecture firm EE&K, owned by Perkins Eastman. “The preservation movement is solely responsible for acknowledging these beautiful and flexible buildings, built in the past, were capable of change.”

EE&K has tackled several high-profile adaptive reuse projects, including the conversion of the former New York City Police Department Headquarters at 240 Centre Street, in Little Italy, to a 55-unit co-op, as well as the conversion of the former U.S. Custom House into the National Museum of the American Indian. The majestic 180,000-square-foot police building, which sat unoccupied for a decade, was almost demolished in the 1970s. “But it was decided it would be too pricy to tear down,” Mr. Eckstut said. “So the question was, what do you do with it?”

EE&K was hired to restore the deteriorating limestone, terra cotta and copper façade, as well as create a range of apartment sizes and configurations to suit the market. “The building is not repetitive, so we knew right away that apartments would be unique, one of a kind,” said Mr. Eckstut. And today, unique spreads mean big bucks. A 6,600-square-foot apartment, located in the building’s former gym, hit the market in 2014 for $31 million. Another 6,000-square-foot, four-story penthouse that occupies the building’s cupola is now on the market for $39.9 million.

Developers and architects confront a range of possibilities when looking to convert old buildings. “You have to consider the past use of a building, the changes over time, and how the past use informs the future use,” said Ward Dennis, a principal at Higgins Quasebarth & Partners, a preservation consulting firm. Because the market is so active, he said, developers are considering everything from hotels to offices to retail to residential.

There are challenges working with old buildings. ‘You don’t always know what you’re going to uncover. So there can be additional costs as you have to change the work.’—Stanton Eckstut, principal at architecture firm EE&K

The firm seeks “character-defining features” of old buildings to help decide their future. An elaborately decorated lobby in a former office building is something worth integrating in a new design, for example, or the open spaces of a manufacturing warehouse make sense for loft apartments or office space. The firm is consulting on the high-profile conversion of 5 Beekman Street—a Financial District office building that’s been empty for a decade—into a 287-room hotel. There was no question that the building’s stunning, soaring atrium would be restored to its former glory, but “it has been a real challenge dealing with code issues” to do so, said Mr. Dennis.

Indeed, there is no shortage of challenges working with old buildings. “You don’t always know what you’re going to uncover,” Mr. Eckstut said. “So there can be additional costs as you have to change the work.” And some buildings are just difficult to convert—churches being one of them, given that architects must deal with details like stained glass, pitched roofs and large sanctuary spaces. Higgins Quasebarth & Partners worked with developer Triangle Properties to convert St. Peter’s Church and Academy, at 401 Hicks Street in Cobble Hill, into a 59-unit condo in 2005. The developer wanted to remove the stained glass, due to its depictions of Catholic iconography, but was urged to integrate it into the design. Ultimately some was removed and some was kept, “But we found that potential buyers loved the stained glass and wanted more of it…the imagery was not an issue,” said Mr. Dennis.

There’s also the matter of community opposition to reuse projects. A plan to convert the former First Church of Christ, Scientist, at Central Park West and 96th Street into a 39-unit condo faced significant pushback from Upper West Side locals who worried it would compromise the historic facade, before the  Landmarks Preservation Commission approved a revised plan from the developer. Even the High Line, a project widely
embraced by New Yorkers as a stellar example of adaptive reuse, “wasn’t a popular project when we first proposed it,” said Robert Hammond, now the executive director of Friends of the High Line, the nonprofit caretakers of the park. “People thought it was ugly and there was a desire to tear it down,” he said.

“We wanted to reframe how you look at this ugly, unused rail line,” Mr. Hammond continued. “We wanted to capture that feeling of the ‘abandoned ruin’ but knew we couldn’t keep it totally untouched.” The result was a public park that integrates the existing infrastructure—“something that would be impossible for us to recreate,” said Mr. Hammond—and it’s gone on to prompt a rash of surrounding development. The High Line’s success also started a conversation about adaptive reuse and public space, with new projects like the QueensWay (a proposed park along an abandoned rail line in Queens) and the Lowline (an underground park proposed for a former trolley terminal in the Lower East Side).

When Martin Lomazow was considering redeveloping his father’s industrial packaging facility at 330 Himrod Street in Bushwick, “Most of the architects proposed starting from ground zero,” he said—which meant demolishing the 1800s factory building originally built for Dannenhoffer’s Opalescent Glassworks. His meeting with Brooklyn-based developers ASH NYC went differently. “They said ‘freeze’…you have to save this building,” he recalled.

ASH is no stranger to adaptive reuse projects; the young firm gained attention converting a former Providence, R.I., strip club into a hotel. To them, adaptive reuse makes good business sense. “It’s that saying, ‘we don’t build them like we used to,’ ” said Ari Heckman, founder of ASH. “These buildings are hard and expensive to replicate…they would cost $1,000 a square foot to build,” he said. “You’re getting the building at a discount.”

ASH also knows that adaptive reuse offers a leg up in a saturated real estate market: “You’re able to create interesting spaces in older buildings that you can’t necessarily get in new buildings,” Mr. Heckman said. The firm will transform the existing warehouse—which still has the Dannenhoffer’s Opalescent Glassworks lettering on its façade—into commercial and residential (rental) space, the latter in the form of studio- to three-bedroom units; new glass buildings will flank the factory on either side.

“We wanted an interplay between new and old,” said Mr. Heckman, but you can tell he’s most taken by the old. “It’s not that I believe in ghosts or anything,” he said, “But to have the former inhabitants and their stories woven into a building…it’s just a romantic and exciting thing to do.” 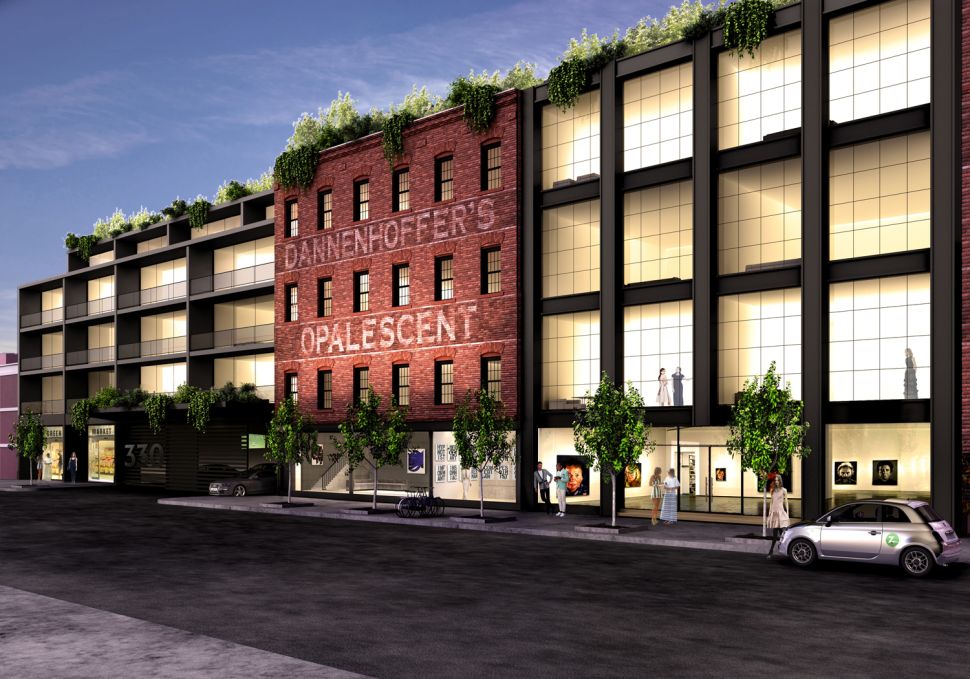