Acting Attorney General John J. Hoffman today announced the indictment of a Bloomfield Township councilman by a state grand jury for allegedly soliciting and accepting a bribe of $15,000 from a business owner, promising the owner that he would use his position on the council to ensure that the township went ahead with its planned purchase of the man’s commercial property.

First Ward Councilman Elias N. Chalet of Bloomfield, 53, was indicted today on charges of official misconduct (2nddegree), bribery in official and political matters (2nd degree), acceptance or receipt of unlawful benefit by public servant for official behavior (2nd degree), tampering with or fabricating physical evidence (4th degree), and hindering apprehension or prosecution (4th degree).  Chalet was arrested on Nov. 16.  The charges are the result of an investigation by the New Jersey State Police Official Corruption North Unit and the Division of Criminal Justice Corruption Bureau.

“Chalet had the power to influence a decision by the township council that he knew would have a big financial impact on the businessman he allegedly solicited for a bribe, and we charge that he tried to parlay that into a big, crooked profit for himself,” said Acting Attorney General Hoffman. “This case represents local corruption at its worst.”

“When officials stop serving the public interest and instead serve themselves and those willing to pay their price, good government goes out the window,” said Director Elie Honig of the Division of Criminal Justice. “This type of corruption has an immediate cost to taxpayers, but it also has a steep price in the long run because it erodes government integrity and public trust.”

“We entrust our elected officials with looking out for the best interests of their constituents, not the best interest of filling their own pockets with bribe money,” said Colonel Rick Fuentes, Superintendent of the New Jersey State Police. “This indictment serves notice that illegal conduct by New Jersey’s elected officials will not be tolerated.”

Chalet allegedly accepted the first cash payment of $10,000 in cash from the business owner on Oct. 23 at Chalet’s real estate office.  Chalet was arrested on Nov. 16 at his real estate office after he allegedly accepted the remaining $5,000 in cash from the business owner.  Those meetings also were recorded.

When the State Police moved to arrest Chalet on Nov. 16, minutes after he allegedly accepted the cash payment of $5,000, Chalet remained locked in his real estate office for approximately 45 minutes, refusing to respond to a detective who repeatedly knocked on the door and a window of the office.  Relatives of Chalet approached detectives at the scene and tried to reach Chalet on his cell phone.  They reported that Chalet was in the bathroom.  It is alleged with respect to the fourth-degree counts of the indictment that Chalet destroyed or concealed the $5,000 in cash.  The money was not found when State Police detectives conducted a search of Chalet’s real estate office after his arrest.

Chalet was initially lodged in the Essex County Jail with bail set at $100,000.  He has since been released on bail. 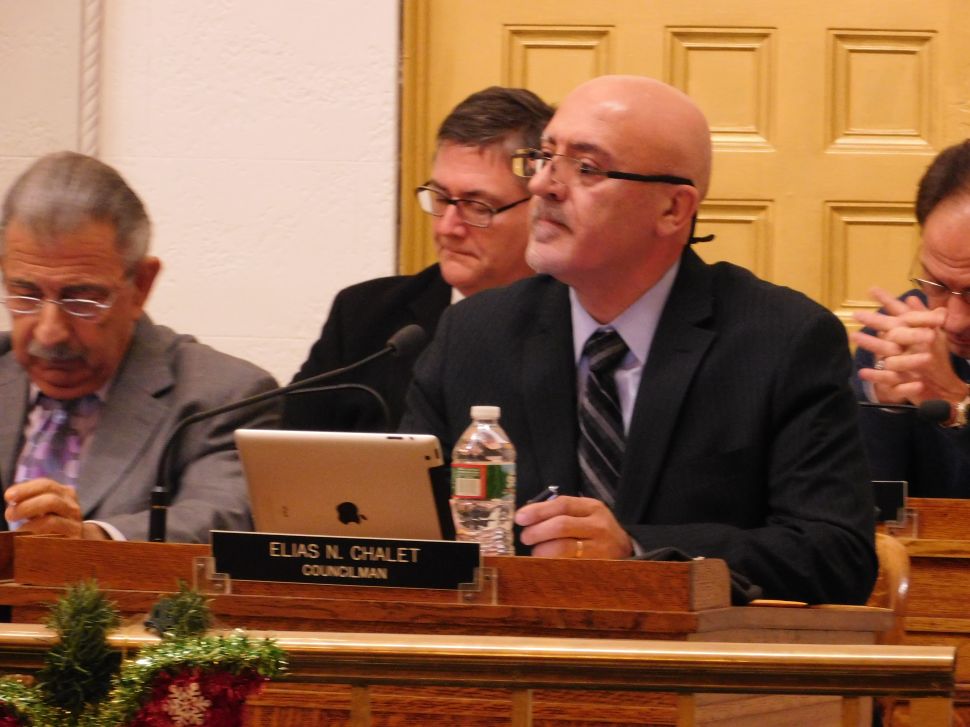