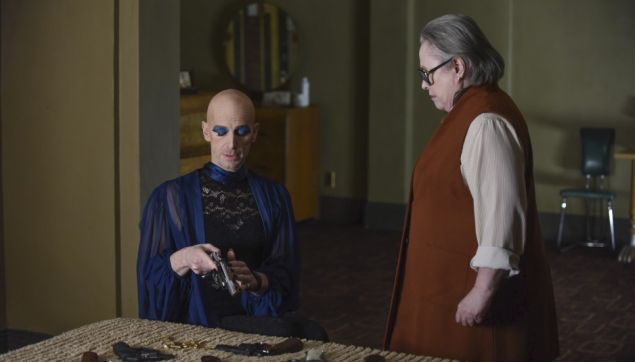 American Horror Story has long teased out the idea that all its anthological seasons exist in the same weird universe, but it wasn’t until last season’s Freak Show that we saw how this concept would worm its way through Ryan Murphy’s campy campfire series. And to be honest, the result was a little disappointing: Pepper, the “pinhead” from season 2’s “Asylum” got a saccharine-sad backstory to explain how she went from Jupiter, FL all the way up to Massachusetts in time to witness the Bloodyface (R.I.UGGGGH.) murder spree and be granted extraterrestrial intelligence. I have a couple friends who feel differently–that Pepper’s kitchen-sink maudlin tale was the zenith episode of the universally acknowledged worst season– but personally, it made me long for the days when Rod Serling would just drop by to remind you that, yeah, you were still in The Twilight Zone, full stop.

I’m more mixed about this second crop-up of crossover in Hotel, which has proven itself to be a valiant, if at times uneven, effort to repair the damage from some of the more arbitrary spaghetti monster plots of previous seasons. Consider the difference between the reappearance, early on this season, of Marcy the Real Estate agent vs this episode’s underlining that the same rules of haunting apply to the Cortez as they did to Murder House: one of them is a cute Easter Egg; the other is a service to the narrative, underscoring the Countess’ silent tears as she realizes that she’s now trapped in the same building as her insane ex-husband James March. (And by extension, her less insane, though equally pissed, second husband, Will Drake.) We don’t need a crossover character to remind us that we’re trafficking in the same rules throughout each American Horror Story installment; these little cameos instead become further testament to the lack of respect Ryan Murphy and Brad Falchuk have for an audience that can’t be expected to understand intertextuality without corny, shoe-horned reminders.

Yet I still couldn’t help but cheer to see Queenie (Gabourey Sidibe) check into the Cortez this week, if only because it meant that we might finally have an interesting showdown between different supernatural elements. Vampire vs voodoo witch? YASS, QUEEN(IE)! Forget for a moment how confusing it is to have Queenie interact with actors from Coven without recognizing them in their previous roles: you could forgive her for not recognizing mute servant Spalding as the ferocious Liz Taylor (though they both have a penchant for dress-up), but not even a passing “Hey, Ramona girl, you look an AWFUL lot like Marie Laveau?” or “Why is that front desk lady one blood-soaked facial away from a great Marie Delphine LaLaurie impression?” It’s maybe a small quibble, but considering that the same cast shows up just about every season, it’s going to start being a major chore to keep remembering which character these people are supposed to be inhabiting…while seemingly oblivious to the fact that everyone around them looks exactly like someone else they know.

I feel like Lil Dickie asking in “Pillow Talk”: “Why can’t God fuck with aliens?”

But again, that’s all small potatoes compared to the larger problem that Queenie’s brief stay at the Cortez brings into focus, and that’s American Horror Story’s infuriating ability to bring together a host of horror tropes in one room and then totally allowing the opportunity to go to waste. Now, I’m not asking for Freddy vs Jason here. I’m not even asking for Alien vs Predator. But in season two, was it too much to ask for Alien vs The Devil, seeing as the show went through all the trouble of hosting both supernatural entities on the same former tuberculosis ward? I hate how AHS raises the specter of an interesting pair-off, and then completely, almost pointedly, ignores it. I feel like Lil Dickie in the brilliant song “Pillow Talk” when he asks: “Why can’t God fuck with aliens?”

There’s an argument that Queenie vs Ramona at least tackled the “witch vs vampire” issue, and it was interesting to see that Queenie’s voodoo doll ability had a fatal weakness in that it couldn’t be used against ghosts (though interestingly, this never came up in Coven, despite the appearance of many ghostly and demonic antagonists like the Axeman, Papa Legba and the Frankenstein’d Kyle Spencer), but dispatching her in such short order felt like a squandered opportunity for a much grander face-off. (Unless this raises the specter of the rest of the Coven showing up for revenge; though again, that raises a large red flag for confusing character doppling. Maybe just send Zoe? Or have the bitchy Madison Montgomery pop by?) In the immediate aftermath of Queenie’s demise, Ramona herself mentions the possibilities of a vampire surging with witch’s blood…only to forgo that potentially interesting dynamic in lieu of a make-out scene with the Countess. Was I the only one yelling at the screen “Come ON, people?!”

When American Horror Story backs itself into a corner plot-wise (and by that I mean, creates a fascinating template that it’s too lazy to follow through on), it makes like Michael Scott during improv class.

It wasn’t enough to kill vampires Valentino and Donovan with bullets, but the Countess as well? That’s so…boring. I’m sorry, but it’s boring. One of them would have been enough for us to get the point the show was trying to make: that vampirism, in this iteration, is not a guarantee of immortality but of youth. But to knock off virtually every major player with such a mundane and mortal instrument of extinction is, like all of the very worst aspects of the show, nothing short of inexcusably laziness on the part of the writers. These are self-styled gods, some of them pumped full of witch’s blood and assisted by century-old ghosts, and yet they can be brought down by the bullets of one unhinged cop?

I’m not even going to get into the stupidity of John Lowe’s motivation in this scene: for instance, as the Ten Commandments killer playing out his final “Thou Shalt Not Murder,” wouldn’t he like some evidence of the Countess’s transgressions. Because looking back through my notes, John’s going on nothing but heresy that the Countess has committed the sin he’s accusing her of. It’s not like he’s caught her in the act, and his wife and child stand as testament that the Countess can turn victims instead of merely killing them.

Not to mention Sally’s lost opportunity: if she wants John to stay with her so badly, why doesn’t she just kill him on the spot and turn him into a ghost on house arrest, like herself? And wait, as someone who died outside the hotel–like directly outside, but outside nonetheless, which apparently was enough to save Donovan from an after-lifetime of moping around corridors–why does she even need to stick around? She can prowl the street for March’s victims, which implies a freedom of movement not afforded to the Cortez’s other full-time tenants. (Though now that I’m thinking about it, that was only on Halloween, which, if the Murder House rules apply, would be the one time of year she could go out.) (Though in that case, why wouldn’t March himself leave the hotel on that date? Too busy hosting mass murderer dinner parties?) (Ugh this show.) And what’s the deal with Sally’s dildo berserker demon?

Ultimately though, none of the above amount to my biggest grievance with this sub-par episode in an otherwise stellar return season: now that Hazel Evers has been banished, a la Tate from Murder House, is anyone else bothered by the fact that the Cortez is going to get absolutely filthy? 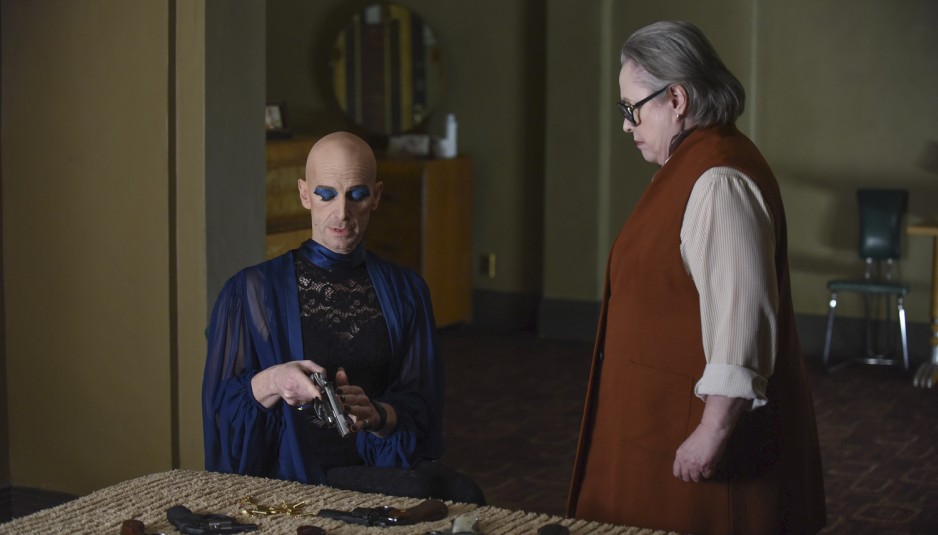