There are two ways to watch CBS’ newest half-hour comedy, Angel from Hell.

The first way is this:  Allison (Psych‘s Maggie Lawson) is a young, straight-laced doctor whose love life is wilting thanks to a deadbeat, freeloading boyfriend Evan (David Denman). Allison’s life gets a much needed kick in the pants when she meets an eccentric woman named Amy (Jane Lynch), who claims to be Allison’s guardian angel. Prepare for hijinx, people, because they ensue. Looked at under this lens, Angel from Hell is…kind of a train wreck, where the premise wears thin quickly, the jokes rarely land, and even the Herculean efforts of the otherwise endlessly watchable Ms. Lynch can’t raise this thing passed more than a “meh.”

But, the second way is this: Allison is a young, straight-laced doctor whose love life is wilting thanks to a deadbeat, freeloading boyfriend Evan. Her life gets a horrifying butcher knife to the stomach the day she meets an alcohol-soaked, clearly mentally ill homeless person named Amy who not only knows every detail of Allison’s life, but also pursues her relentlessly, ignoring all warnings and protest. Under this lens, Angel from Hell is…actually kind of terrifying. Seriously. There is more violent horror-fiction on TV, more disturbingly surreal, more twisted. But the premise of Angel from Hell is, if you really think about it, just straight realistically fucked up enough to be genuinely more unsettling than anything else out there.

Don’t believe me? Let me throw a hypothetical situation your way. Let’s pretend you’re a doctor named Allison in this case, to keep things simple. Let’s say you’re walking, alone, down a busy city street. Doesn’t matter which city. Suddenly a woman, much taller than you and reeking of booze, slams into you. Which, okay, is pretty jarring, but the sidewalk is crowded after all; you apologize. In response, this woman looks you dead in the eyes, slurring their words, and deadpans “That’s a very sweet thing to say. I bet you’re a very sweet person…Doctor Allison.”

Can you imagine? What would you even do? What could you even do? I suppose you just keep walking, hoping you heard wrong, or there was a misunderstanding, or that you are caught in some terrible fever dream, unable to wake. But still, you have to keep walking. You eventually meet up with your brother Brad (Kyle Bornheimer) for lunch, and that makes you feel better. For a time. Until you hear the janglejangle of the restaurant’s door opening. Until a tall, lanky frame steps through the entrance. Is that the same woman as before?

“I’m your guardian angel!” the specter shouts, filling the room with the smell of whiskey and neglect, as you try and escape. “Your mother died 412 days ago!” the woman continues.

You stop walking, your breath caught in your throat. The woman is right, your mother did die exactly 412 days ago. “I’ve been watching you,” the woman says, drawing closer. “It’s what we do. We watch over souls. And yours…is amazing.”

Tell me I’m wrong here. This all actually happens, and it only takes up about the first five minutes of the pilot. There is more. So much more. At one point Amy manipulates Allison into meeting up by lying about having cancer. Later, she loiters outside a party at Allison’s apartment, harassing her neighbors. It’s chilling, horrifying, and, honestly, 1000 percent more entertaining than whatever way CBS and creator Tad Quill intended us to watch this show. I’m doing you a favor here, Mr. Quill. You basically have the next Hannibal on your hands if you re-shuffle some plot points.

So where is this bone-chilling tale of dread and woe headed after Angel from Hell‘s pilot episode? Well, Amy eventually exposes Evan’s cheating ways (through computer hacking), breaks into Allison’s place of employment, and cheers her up with a S’More. Allison’s response? “It’s not that I believe that you’re an angel, but I could use a weird friend right now.”

Dear God. The horror has come full circle. Allison has fallen under this woman’s dark spell. The bloodbath has only begun. 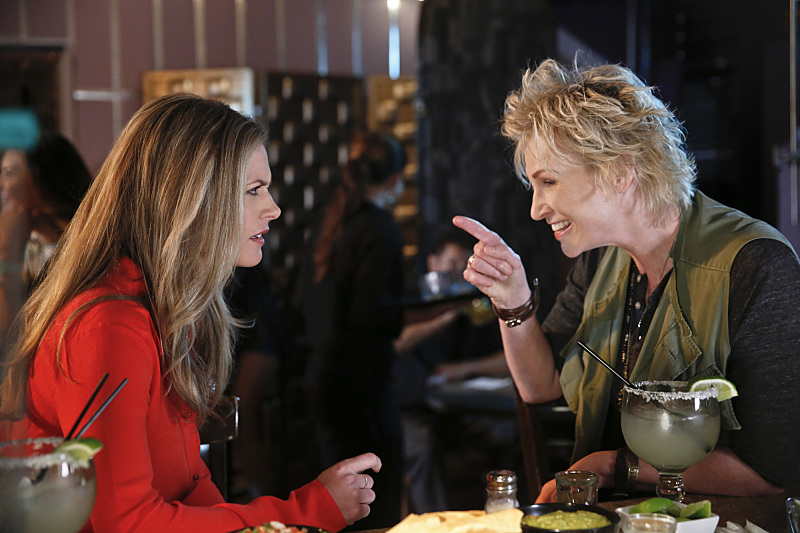