Artist Deborah de Robertis has—once again—been caught with her pants down. The artist, who hails from Luxembourg, was arrested for indecent exposure at Paris’ Musée d’Orsay when she stripped naked and posed in front of Edouard Manet’s famous painting of a reclining nude female, Olympia.

Now, the artist is calling out the museum for using nude figures in its marketing, but censoring the real thing.

When Ms. de Robertis appeared in court on Monday, she accused the museum of “total hypocrisy,” and stated, “They like nudity in art, they just don’t want it to be moving. I don’t understand how you can have this kind of exhibition if you are not prepared to go to examine nudity in the real world.”

The painting was included in the exhibition “Splendour and Misery: Images of Prostitution 1850-1910,” the first official survey of art depicting artistic representations of prostitution in Western art history. On Sunday, as onlookers tried to catch a glimpse of the last hours of the exhibition before it closed, Ms. de Robertis disrobed and lay in front of the painting in the same pose and Manet’s red-headed muse. The artist did, however, wear a portable camera in order to capture the reaction of viewers.

A spokeswoman for the museum told the AFP that after security closed the room the artist was asked to get dressed and she refused. Police were later called to remove her from the premises, and the museum is charging Ms. de Robertis with indecent exposure.

The artist’s lawyer explained in statement, “It was an artistic performance.”

“In both cases, I chose works of art that scandalised people at the time they were produced,” she said. “This time I wanted to show the feminine model Olympia in the age of the iPhone.” 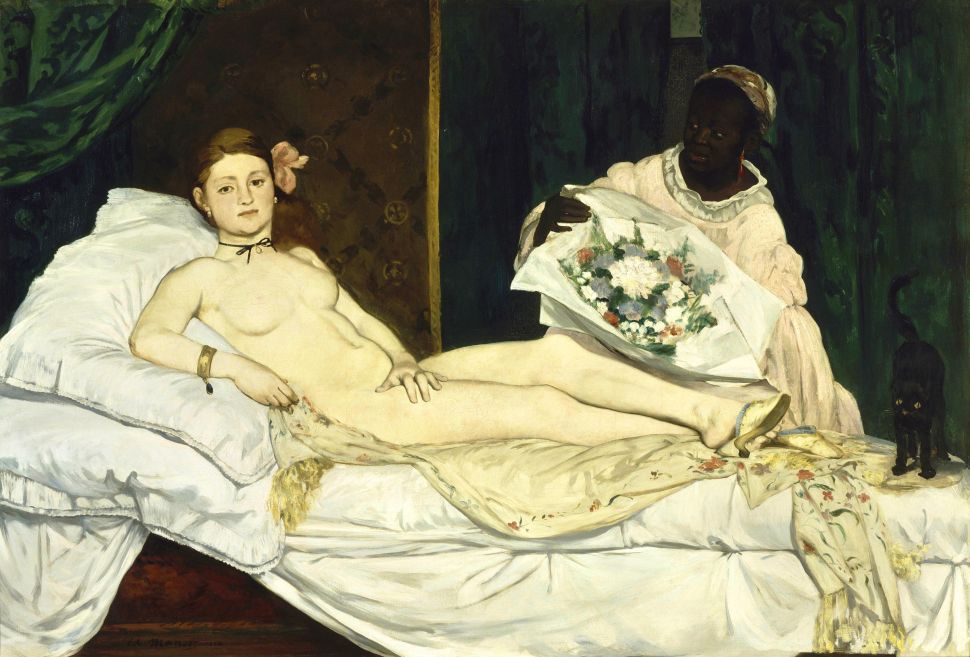