The Evil Dead movies are such a marvel because they are, basically, a study in what one person would put themselves through in the name of high-horror and low-budgets. Sam Raimi is a master, true, but would we still be discussing the Evil Dead if Bruce Campbell wasn’t so willing and mostly able to trip, flip, smash and dive headfirst into gallon on gallon of fake blood?

Ash vs. Evil Dead‘s first season finale, titled “The Dark One,” took that concept and multiplied it by five. After all, El Jefe isn’t the young man he used to be; these kids need to take their share of the punishment. And take it, they do. In the end, after the smoke cleared, the blood was spilled and AC/DC blared over the airwaves, it’s hard to decide who went through the most horrific experience, all in the name of Evil Dead.

Don’t let it be said this show is afraid to do away with characters like a child dismembering some action figures after they grow uninteresting. Last week I figured Heather, based on the fact she pulled off the miracle of surviving one episode of Ash. vs Evil Dead, would stick around for a while. “A while” turned out to be the time it takes to get a couch dropped on your already shattered legs, some rusty nails shoved into your face (and, by all things holy please no, through your foot), and a trip out the door of the cabin in far less pieces than you went in.

But maybe leaving in pieces is preferable to staying inside, down in the basement, if it means Lucy Lawless’ Ruby Knowles is forcing you to regurgitate demon children ad nauseum. I spoke to Ray Santiago before Ash vs Evil Dead premiered, and he mentioned “Pablo has to go through something at the end of the season that no man should have to go through. And it’s definitely awful, and it’s disgusting.”

If you, like me, agree that no man should have demon-sacs forced out of his mouth while The Book of the Dead is affixed to his face, I think we know to what Mr. Santiago referred.

But seriously, though, is there anything worse in horror than demon children? 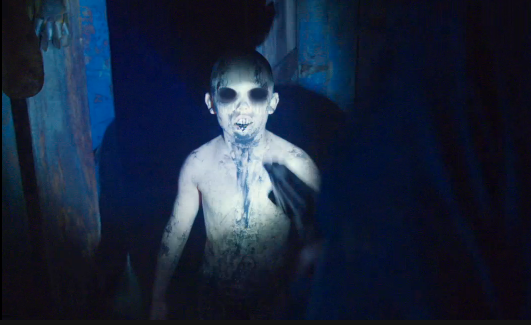 That child did provide what might have been the most nauseating–and perhaps my favorite, bless my twisted soul–moment in this show’s freshman run. We’ve seen Ash blow out the back of skulls before, but the mixture of blood, muck and other unspeakable viscera that covered his face after pulling the trigger in that kid’s mouth may have been peak grossness on a show that can claim it tops itself every week. 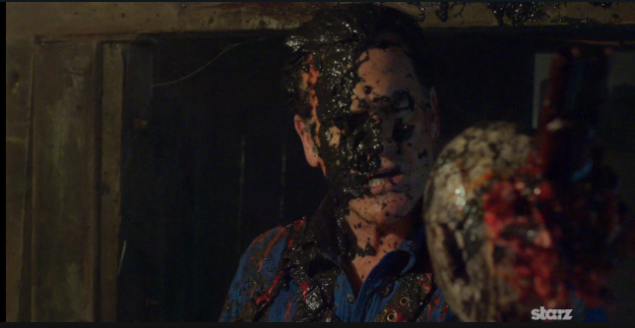 Look, I assume you have already watched the episode, so let’s just talk through this calmly. In a ten episode run that seemed to not up the ante but just pile on the fireworks, you expect the finale to be a massive explosion. The confrontation, for us, between Ash and Ruby was always going to be this over-the-top bloodfest, a battle between good and evil, chainsaw and dagger. Count how many times Ash says he is going to “save the world” on this show. The stakes couldn’t be higher.

Instead, in one of the most unexpected twists this show could have pulled off, Ash makes a deal with Ruby: Kelly lives, Pablo lives, and Ash gets just enough gas money to make it to Jacksonville. In exchange, Ruby keeps the Necronomicon, and the world–Jacksonville included–is basically boned.

Yes, perfect. Stubbornly, amazingly, hilariously perfect. What did we expect from ASH WILLIAMS? This character is incredible, like I mentioned, because of how much he goes through but that’s the character. That’s the point. He’s good at demon-slaying but he’s a damn master at fucking up. The finale itself reminds us that this whole season’s story arc started because Ash got drunk and read a passage from the book bound in human flesh in an attempt to get laid.

I loved this ending, because it was just so…stupid. Look at Pablo and Kelly. They know it. We know it. Ruby probably even knows it. But for Ash, the road to Jacksonville is just sunny enough to blind him to the world coming to an end.

There’s still a lot of questions in the air–where’d all those demon children go? Or Ruby? Actually, who or what even was Ruby? We don’t know. But I’d put money down that when Ash tries figure the answers, he’ll only  trip, flip, smash and dive headfirst into ten more questions.

It can’t be help, that’s just who Ash is. Might as well turn up the radio and continue on down the road as long as the literal sink holes to Hell open up behind your car, not in front.

-I have to call into question Kelly’s plan of setting a house on fire in order to save her friends in the basement of that same house. What I won’t question is how great of a character Kelly is, and has been, and how glad I am she made it out of the finale in mostly one piece. In an episode that took it sight gags BIG, I think my favorite was Kelly weakly punting Heather’s severed head in anger.

–Best one-liner: “Too long, too boring, and not enough boobies,” Ash Williams on The Godfather. And of course he’s a Death Wish kind of guy.

-Even in the end, I feel like Ash vs. Evil Dead‘s creative team never quite figured out what it wanted to do with Ruby. Like too much of this show’s components, her story really heated up just as it got going. 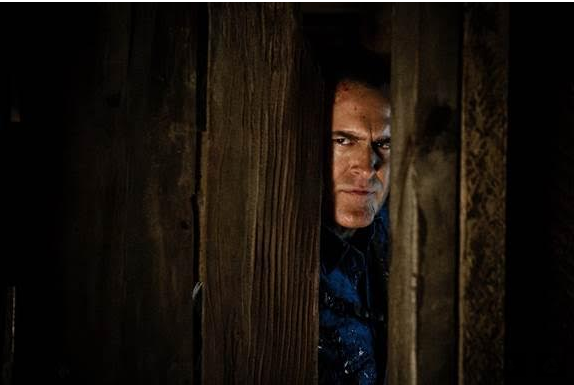