Welcome to tvDownload’s “Ask a Casting Director,” a new series in which we talk to the men and women responsible for populating the worlds of our favorite shows. First up: Dorian Frankel, casting director for FX’s new series, Baskets.

Observer: When a show has such a small, central cast, like Baskets, how important is it to see how the actors read with each other? Does that change the casting process at all?

Dorian Frankel: It depends on the show – this came together in a rather unique way, so there really wasn’t any opportunity to have actors read together.  We’re always conscious of the ensemble we’re building, and do our best to cast actors who feel like they belong in the same world.  But in this case, each actor was simply the best choice for the character.

We went through the usual process of making lists of ideas for Christine (Chip’s mother)…and were very seriously discussing a few top choices when I got an email saying they were reaching out directly to…the person who ended up playing Christine.  (I still can’t bring myself to say the name.)

A little more on this…  Zach Galifianakis was set, of course, and we knew early on that Martha Kelly was going to play Martha.  We went through the usual process of making lists of ideas for Christine (Chip’s mother) and Penelope, and were very seriously discussing a few top choices when I got an email saying they were reaching out directly to…the person who ended up playing Christine.  (I still can’t bring myself to say the name.)  As for Penelope, Jonathan Krisel mentioned that he’d had good experiences working with musicians, so we expanded our process to include musicians and singers.  I’m reviewing my emails, and I think maybe Zach Galifianakis was familiar with Sabina Sciubba, and we arranged for Jonathan Krisel to skype with her, since she was in Paris.  This was after seeing lots of auditions and meeting a few other women.  And the choice was made to go with her.

As you can see, there were many people participating in assembling the cast for the pilot.  When you’re working with such smart, innovative, risk-taking, creative people, they are going to have ideas about casting.  Generally very good ideas – after all, they’re creating the show.  We’re here to fulfill their vision.  I’m always careful to be clear that I’m not responsible for every actor who appears on the show.  When it comes to the series, pretty much all the roles were cast through auditions.  But that wasn’t the case with the pilot.

Observer: For the role of Chip’s mother, did you go in knowing that you’d be casting Louie Anderson. How did his name come up in the process?

DF: I wasn’t present for that conversation, so I’m not sure whose idea it was originally.  But no, I didn’t go in knowing that – it was a later-in-the-process idea.  I remember we were looking into Brenda Blethyn originally, but she wasn’t available.  But that’s where the vision began.  Not where it ended, obviously…

Observer: The premiere episode has a pretty hysterical moment of stunt casting for the celebrity singing the national anthem. Was that person specifically called for in the script? Is there a process for “stunt casting” as opposed to regularly auditioning actors for roles? Can you walk us through that process?

DF: That person was not in the script.  Originally there was talk of stunt casting a band, and we looked into a bunch of options, but some weren’t together any more, some were touring and not available, some lived in other countries.  One of the best things about working on this show was the fluidity of the creative process – if one thing wasn’t going to work, there were always more ideas. The process is kind of two-sided – we put out a breakdown to get ideas from agents and managers, and we come up with our own ideas and find them and see if they’re available and interested.  And then we present the ideas to the producers, and they make a choice.

Observer: How did you come upon Martha Kelly for the role of Martha? What were the specifications for the role, and what about Ms. Kelly’s audition or previous work convinced you she would be right for the role?

DF: Martha does stand-up and I believe Zach Galifianakis knew her.  I don’t know if the role was specifically created for her, but my sense is that it was.

Observer: The town of Bakersfield has what might kindly be described as a “Lynchian” population. What were some of the qualities you looked for when casting some of the smaller roles of the show to give it the show a cohesive feel of existing in this one, weird universe?

DF: This is the aspect of casting that I enjoy the most.  I had conversations with Jonathan Krisel about the world he was envisioning – I assume the vision came from the three of them, but he was the one I talked to on a day-to-day basis.  I’ve worked with him before and I felt like I had a feel for the sensibility he described.  After that, the process is very intuitive.  We didn’t have any pressure to cast names or anyone recognizable – quite the opposite.  So we were able to read anyone who felt like they fit in the world, and so many people were just remarkably wonderful.  We (myself, my partner Sibby Kirchgessner and our amazing associate Marlise Gunzenhauser) read actors on tape and sent the best choices – there was no callback process in front of the director.  Everything was cast from tape.  Our aim was to send a variety of excellent options, and Jonathan would make the final choice.  There was one role (Kevin, Martha’s boss at Costco) for which we loved so many people that we simply couldn’t narrow it down as much as usual.  That’s the beauty of great material – actors just bring so much to the audition, they enjoy it so much, which makes them bring their best.  We’re looking for believability in an odd world.  If the characters feel 100% authentic even if they’re doing or saying something strange, that helps create a world that feels recognizable, even if it’s absurd.

Observer: Were they any unique requests that came in while casting for this show? What were some of the most interesting auditions you saw while casting?

DF: There were so many fun roles to cast!  We had to audition a rodeo clown who didn’t speak, but was a vile human being.  We had to find an actor who could play a believable follower of a particular band, who really understood that strange world.  We auditioned every set of twins we could find!  There are not that many sets of twins…  But the ones we cast are very very amazing and wonderful human beings, and from the moment they walked in we knew they were a different way to go.  We didn’t know if they were the right way to go, but we knew it was amazing.

Observer: Was casting for Baskets harder or easier than previous projects for TV or film you’ve done?

DF: It was unusual, which I really loved.  I wouldn’t call it harder, but it did require a certain level of care and attention.  We really wanted to get it right.  (Of course, we always want to get it right, but sometimes “right” is a more obvious path.  Not here.)  As I mentioned, we didn’t have any pressure to hire known actors.  It’s incredibly freeing not to have to worry about anything but who feels most right, most wonderful, most interesting.  We started the pilot audition process before there was a script – we had some character ideas and a few simple scenarios, and we had actors come in and improvise.  We had people speaking other languages, we had people doing performance art.  It was a blast.  And from the beginning we knew it was a special world we were helping to create and we wanted to bring the utmost care to that process.

Observer: Does the job of casting director become less or more central to a show with so few speaking parts?

DF: I feel like the day to day, week to week work of auditioning guest cast is the bulk of what I do.  Pilots are different – you’re building something for longevity.  But that’s a one-time thing.  After that, you’re filling in the world.  Or, rather, continuing to build the world.  That’s the ongoing assignment.  And I have to say I don’t think of this as a show with so few speaking parts.  I think we hired 84 actors over 10 episodes, so that kept us busy…Were there any interesting requirements for any of the roles? For instance, did you need to go out and find an actual clown for the french university professor in the pilot?

We were less concerned with things like that, for the most part, as long as they could do what the role required.  A great sense of physicality, rather than specific clowning knowledge, for instance.  We did have stunt people and real rodeo guys read for a couple of roles where that was important.  Mostly, we were just looking to fall in love with people as these characters.

Observer: What are you allowed to release to auditioning actors about upcoming projects for the read? Are they given a whole script, or are they only allowed to prepare for certain scenes that they’ll be reading for?

DF: We did release sides, (never a whole script), but we were very careful not to reveal too much.  They were also password protected and watermarked, and actors had to sign non-disclosure agreements.  So we took confidentiality very seriously.

DF: Not really – I knew it would be a little different, logistically, but in the end we’re always just trying to find the right people, to build an environment where actors feel comfortable and creative and can bring their best, trusting our instincts and experience, and taking seriously the responsibility of helping to create the ensemble.  That was certainly the case with this show.  I think the most remarkable part of this experience has been hearing from so many people we cast that it was one of the best, if not the absolute best, working experience of their careers.  They had such wonderful things to say about Zach Galifianakis and Jonathan Krisel, and I think that’s because they felt respected, felt that they were given the opportunity to be co-creators, participants rather than puppets.  When people tell you they like what you’re doing, when they let you try things, encourage it in fact, you’re going to bring a higher level of commitment and boldness.  I think, I hope, that’s what happened on this show. 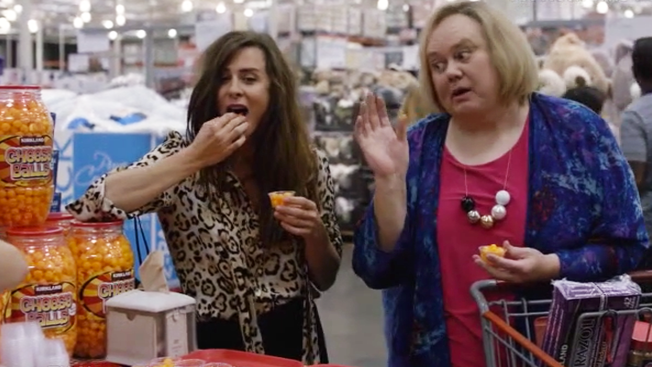