In the final State of the Union address of his presidency, Barack Obama sought to offer a path forward, not back

Stonewalled by a hostile Republican Congress and buffeted by the chaotic, and occasionally surreal, election to replace him, Mr. Obama can accomplish relatively little in his last year in the White House, as he was well aware of tonight. As much as Mr. Obama, a Democrat, wanted to point the way forward for his successor, he used his final address to defend his legacy— and argue to the nation that a Middle East on fire does not mean the world is devolving under America’s watch.

In response to rising fears that the Islamic State, the apocalyptic terrorist group which inspired deadly attacks in Paris, Istanbul and the United States, is an existential threat to the nation, Mr. Obama asserted that “over-the-top claims that this is World War III just play into their hands.”

“Masses of fighters on the back of pickup trucks and twisted souls plotting in apartments or garages pose an enormous danger to civilians and must be stopped,” Mr. Obama declared. “But they do not threaten our national existence. That’s the story ISIL wants to tell; that’s the kind of propaganda they use to recruit.”

“I told you earlier all the talk of America’s economic decline is political hot air. Well, so is all the rhetoric you hear about our enemies getting stronger and America getting weaker,” Mr. Obama continued. “As someone who begins every day with an intelligence briefing, I know this is a dangerous time. But that’s not because of diminished American strength or some looming superpower.”

His remarks were aimed at the host of critics, primarily Republican and occasionally Democratic, who say the Obama administration was bigfooted by China and Russia, appeased a hostile Iran, watched Syria crumble into a catastrophic civil war, and done little to stem the rise of the ISIS. Mr. Obama, who won his first presidential election on the strength of his opposition to the Iraq War, sought again to argue that restraint and coalition-building are more important and effective than muscle-flexing.

The president said that America “can’t try to take over and rebuild every country that falls into crisis. That’s not leadership; that’s a recipe for quagmire, spilling American blood and treasure that ultimately weakens us.”

“It’s the lesson of Vietnam, of Iraq — and we should have learned it by now,” he explained. “Fortunately, there’s a smarter approach, a patient and disciplined strategy that uses every element of our national power. It says America will always act, alone if necessary, to protect our people and our allies; but on issues of global concern, we will mobilize the world to work with us, and make sure other countries pull their own weight.”

Fortunately, Mr. Obama argued, there’s another way, “a patient and disciplined strategy that uses every element of our national power. It says America will always act, alone if necessary, to protect our people and our allies; but on issues of global concern, we will mobilize the world to work with us, and make sure other countries pull their own weight.”

His words will only be fodder for the many Republicans hoping to occupy the White House next year. Sen. Marco Rubio of Florida, a top contender, blasted out a fundraising appeal during the speech, asking recipients if Mr. Obama’s State of the Union address was “crippled” or “weak.” To his critics, Mr. Obama is feckless and naive, a weak-willed liberal lost in a world of terror.

Mr. Obama, however, urged Congress to authorize the use of military force against ISIS, something the body has not moved yet to do. While taking an approach urged by some close watchers of the terrorist group to not validate their ideology and prophesies with a large military invasion, Mr. Obama also sought to remind watchers that he was the president who killed Osama bin Laden, an elusive goal of the Bush White House.

Taking a direct jab at another top presidential contender, Sen. Ted Cruz of Texas, Mr. Obama said America “answer needs to be more than tough talk or calls to carpet bomb civilians. That may work as a TV sound bite, but it doesn’t pass muster on the world stage.”

Gov. of Chris Christie of New Jersey and Donald Trump, the celebrity billionaire leading national polls, were also called out indirectly for their harsh rhetoric against Muslims and immigrants. Citing Pope Francis, the president mocked Mr. Christie’s campaign slogan, “telling it like it is,” and said insulting Muslims is “just wrong.”

“When politicians insult Muslims, when a mosque is vandalized, or a kid bullied, that doesn’t make us safer. That’s not telling it like it is,” Mr. Obama said. “It diminishes us in the eyes of the world. It makes it harder to achieve our goals. And it betrays who we are as a country.”

“Our public life withers,” he added, “when only the most extreme voices get attention.” 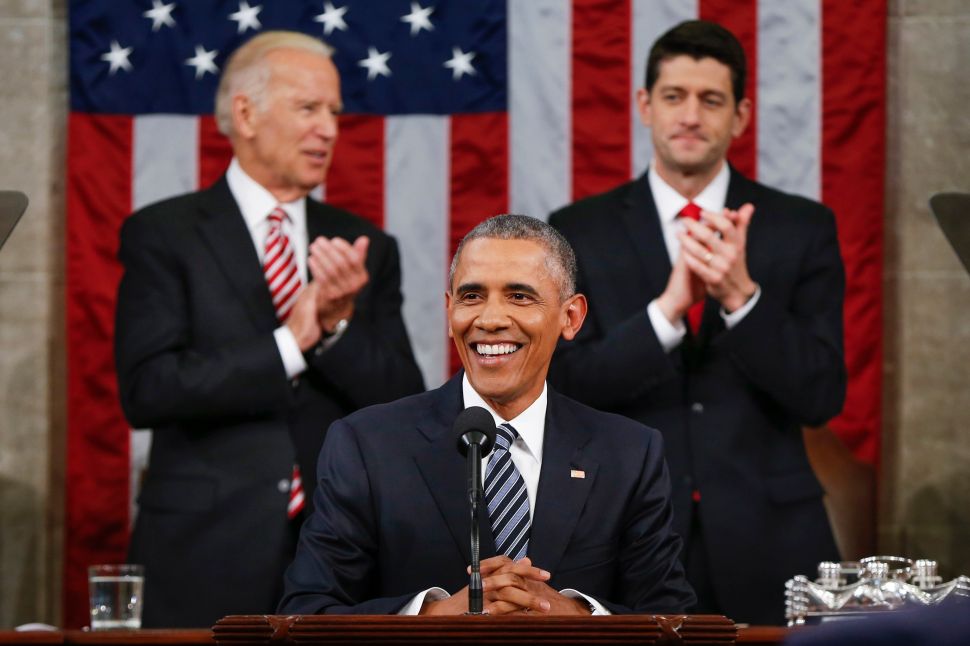