Chip Baskets is the worst student at the illustrious Académie de Clown Français, a fact that he attributes to not speaking any French at all. Broke and close to flunking out of school he decides to move home, to Bakersfield, California, but not before proposing marriage to the delightfully trashy Penelope, who accepts his proposal but makes it clear she feels nothing for him, only wants a green card and is planning to drop him as soon as she meets someone better in America. Chip aggressively shakes salt on a carrot as she delivers this news, somewhere between oblivious and locked in denial.

Baskets, the co-creation of Jonathan Krisel, Louis C.K., and Zach Galifianakis, is a weird show. Weird as hell. Weird enough to stand out as weird in a culture where the comedy zeitgeist is largely informed by the bonkers, berserk, absurdist aesthetic of Tim Heidecker and Eric Wareheim. The plot of this pilot episode largely concerns itself with Chip struggling to make his way in the rodeo and searching for someone willing to loan him forty dollars so Penelope can get HBO in her hotel room. Along the way we meet Martha, a sweet if strange insurance agent seemingly crushing on our star, Chip’s mother, played by 80’s stand up comedy star Louie Anderson in drag, and Chip’s twin brother Dale—also played by Galifianakis—the dean of a strip mall career college that offers classes in homemade condiments, ice cream truck repair, and personalizing license plates.

In some ways the whole thing feels like a vision of hell. Bakersfield is depicted as sandblasted, drab, filled with soulless suckers. No one, outside of Martha, treats anyone else with even the tiniest bit of respect or dignity. Kato Kaelin opens a rodeo with the worst rendition of the national anthem imaginable.

The surrealism and strange and strained interpersonal relationships show Louis C.K.’s hand, and the show is about as melancholy as the saddest segment in an episode of Louie, too, but laced with a tense, angry edge due to the barely contained rage that flickers behind Galifianakis’ eyes in the best moments of this pilot episode.

That flicker is what I always loved about Galifianakis as a comedian, where his hook was picking away at a piano while dropping absurd one-liners. The act could have been cute and forgettable but for the edge in Galifianakis’ voice and the kind of arrogant pose he’d adopt as part of his delivery, which made him seem totally electric then and now. He tapped into this same energy in his breakout role in The Hangover, but there’s something so much more compelling about the whole thing here, where the stakes are lower and the biggest set piece is Chip’s frustration as he orders sodas of increasingly unlikely availability from a fast food drive-thru.

And I guess the stakes here are worth mentioning, too. It strikes me that this show is to some extent about taking a ridiculous premise—a pretentious clown forced to work the rodeo in Bakersfield—which sounds more like an idea for a parody of a student film than a pitch for a show, and stretching it out as far as possible…but the pathos here is real, and for me at least fairly potent. When Penelope tells Chip to get a job at Arby’s and Chip responds that Arby’s wouldn’t hire him as a clown, I felt a real twinge of sympathy for the character. When Martha asks Chip if he’s still in love with Penelope and he responds “Well, she’s not in love with me, that’s the important thing,” I forgot for a second that I was watching a show where, moments earlier, Louie Anderson had chugged Gatorade until he choked.

And there’s something powerful about the idea that Chip sees himself as an artist and believes that clowning should be more about creating beauty than belly laughs, thinks himself hamstrung by his faithless family and a crass culture, and is maybe blind to the fact that his failure to flourish as an artist is due his own pretentions and limitations.

I feel like I’m making the show sound like it’s not funny. It’s funny. I laughed. In most of his movie roles Galifianakis has played characters smugly convinced that they’re winning when it couldn’t be clearer that they’re floundering. He’s really, really good at drawing the humor out of that kind of character, and maybe the most promising thing about this new series is watching him take that in a deeper, stranger direction. I’m excited to see where it goes, and I hope you’ll tag along. 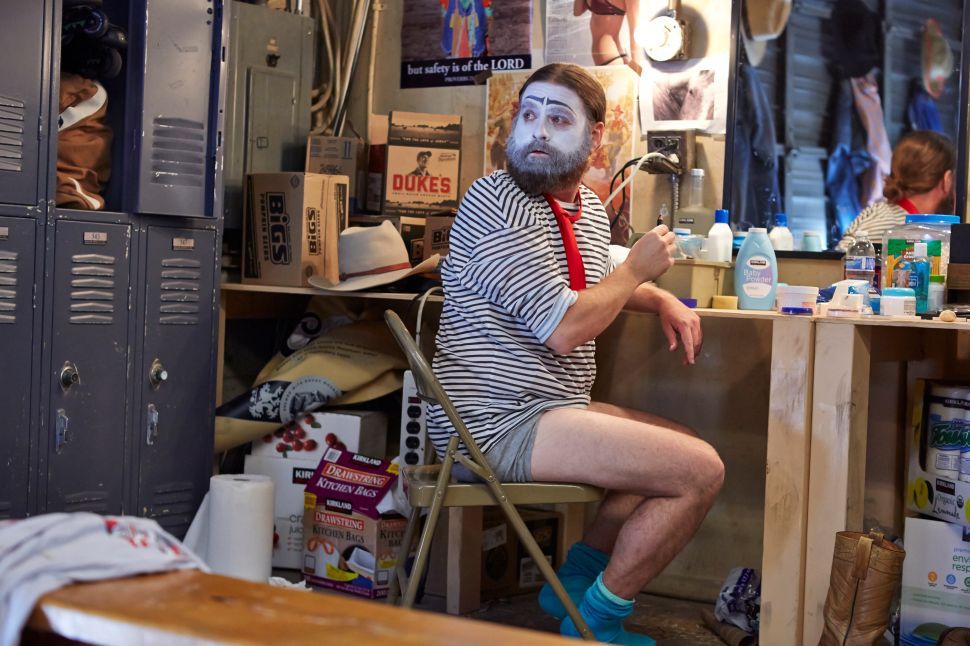