When Sen. Bernie Sanders’ “twin,” Queens State Senator James Sanders Jr., took the stage in Manhattan earlier today, he broke some news for the Sanders fans and reporters in the crowd: Newark Mayor Ras Baraka was feeling the Bern.

“We have great hope. We have the mayor of Newark in here, Ras Baraka is in here,” Mr. Sanders, the Queens Democrat, declared at Town Hall in Midtown, where the Vermont independent, running in the Democratic primary for president, was about to deliver a blistering speech on Wall Street reform.

After name-checking Mr. Baraka, and earning plenty of cheers from the crowd, the Queens senator, who announced the endorsement of his namesake last week, noted that New Jersey Assemblyman John Wisniewski, Harlem State Senator Bill Perkins and Brooklyn Councilman Rafael Espinal had all backed Mr. Sanders, who is of no relation. (Mr. Sanders, the presidential contender, later joked that Mr. Sanders, the Queens Democrat, is his “twin senator.”)

But Mr. Baraka, unlike the other men, did not endorse Mr. Sanders and was not sitting in Town Hall. He was miles away in Newark, New Jersey, having meetings at City Hall, according to his public policy director, Tai Cooper.

“He has not endorsed,” Ms. Cooper told the Observer. “That is inaccurate information.”

Ms. Cooper suggested that the mix-up may have occurred because the left-leaning Working Families Party, which helped elect Mr. Baraka in 2014, also endorsed Mr. Sanders of Vermont for president. A WFP spokesman said Mr. Baraka was invited to the speech but was unavailable.

At first Mr. Sanders, the Queens senator, didn’t shed any real light on the matter. When asked if he thought Mr. Baraka was at the event and why, Mr. Sanders replied via text message “probably not” and “didn’t see him stand when called.” He later added that “someone gave me bad info.”

A spokeswoman for the Bernie Sanders campaign did not return a request for comment.

Updated to include additional comment from State Senator Sanders 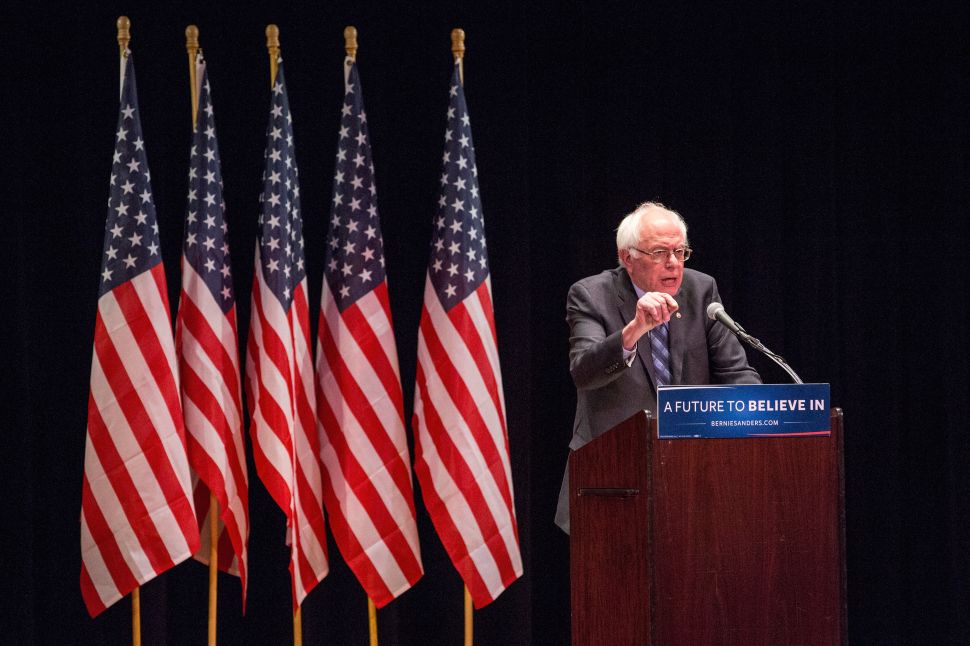