With the Iowa caucuses almost a week away, the Clinton and Sanders campaigns have engaged in inevitable warfare, fitting for what has become a two-horse Democratic primary reminiscent of 2008. The third Democrat, former Maryland Gov. Martin O’Malley, has been rendered irrelevant, leaving Ms. Clinton and Mr. Sanders to trade barbs on everything from healthcare to gun control to climate change to who is more like Karl Rove, the ruthless GOP strategist of the Bush White House hated by liberals everywhere.

Ms. Clinton, watching her leads evaporate in Iowa and New Hampshire, has been on a clear offensive, criticizing Mr. Sanders, a self-professed democratic socialist, on several major fronts. After Mr. Sanders accused her of acting like Mr. Rove when surrogates blasted his single-payer healthcare plan for both lacking detail and undermining Obamacare, the Clinton camp invoked Mr. Rove last night in a fundraising email, telling supporters that Mr. Sanders and Mr. Rove “have something in common” because “they’re spending a whole lot of money”on ads against Ms. Clinton.

Indeed, Mr. Rove’s Super PAC has launched a digital ad in Iowa attacking Ms. Clinton’s ties to Wall Street, an effort some believe is intended to prop up Mr. Sanders, viewed by Republicans as the weaker general election candidate. This was a sentiment echoed by the Clinton campaign yesterday when they claimed Mr. Sanders’ call to “normalize” diplomatic relations with Iran would be fodder for a GOP relentlessly critical of the Iran nuclear deal.

“Republicans have put a major focus on foreign policy in the primary election that’s going on, almost to the point of ignoring the economy,” said Brian Fallon, Ms. Clinton’s national press secretary. “It’s the Republicans who often try to conflate sensible diplomacy with lack of recognition of the threats facing us.”

And this means, Mr. Fallon argued, that Mr. Sanders is the “very caricature Republicans like to put forward.”

In defense of Mr. Sanders, he has not spent a “whole lot of money” on ads directly attacking Ms. Clinton. On that front, he has mostly stuck to his pledge to avoid negative campaigning. No ad has mentioned Ms. Clinton by name and only one drew a direct contrast of their records, which infuriated the Clinton camp nonetheless.

But in public remarks, fundraising appeals and emails to the press, the Sanders campaign has reveled in Ms. Clinton’s stumbles. Last night, they sent reporters a story from Mr. Sanders’ hometown paper, the Burlington Free Press, about how a pro-Clinton Super PAC tried to pitch off the record anti-Sanders tips to the paper. They gleefully shared a New York Times story detailing the ways Mr. Sanders has sought to underscore Ms. Clinton’s deep ties to Wall Street and years of paid speechmaking. His spokesman, Michael Briggs, tore into David Brock, the head of the aforementioned pro-Clinton Super PAC, noting his conservative past.

“It’s bad enough that Hillary Clinton is raising millions in special-interest money in her super PACS. It is worse that she would hire a mudslinger like David Brock. She should be ashamed of her association with Brock,” Mr. Briggs said yesterday.

In some ways, this is still asymmetrical warfare. Ms. Clinton has been the front-runner, the “inevitable” nominee racking up an unprecedented level of establishment support. Mr. Sanders is the insurgent still trying to figure out how to connect with the minority voters who powered Barack Obama’s upset of Ms. Clinton eight years ago.

Joe Trippi, a longtime Democratic consultant, said this still isn’t as nasty as past primaries. Both candidates have refrained from more personal, ad hominem attacks because they each need to win over supporters in their rival’s camp, he argued.

“It’s been mild compared to what usually happens,” he said. “I’m actually more surprised by the civility of it all.”

For Mr. Sanders, winning Iowa or coming in a very close second is a must. If Ms. Clinton defies recent polls and crushes him there, all hope is lost for the progressives who want to topple her. New Hampshire is also a must win. Ms. Clinton has the option of playing a longer game.

But the momentum, for now, is with the scruffy career independent from Vermont. This will mean plenty of sound, and a lot more fury, from the two presidential candidates. 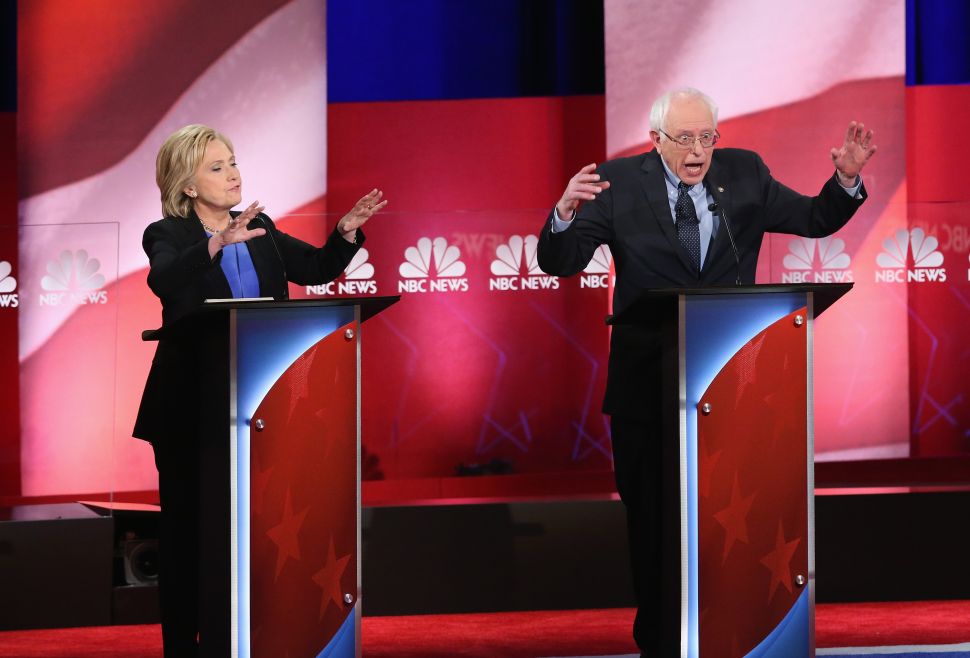